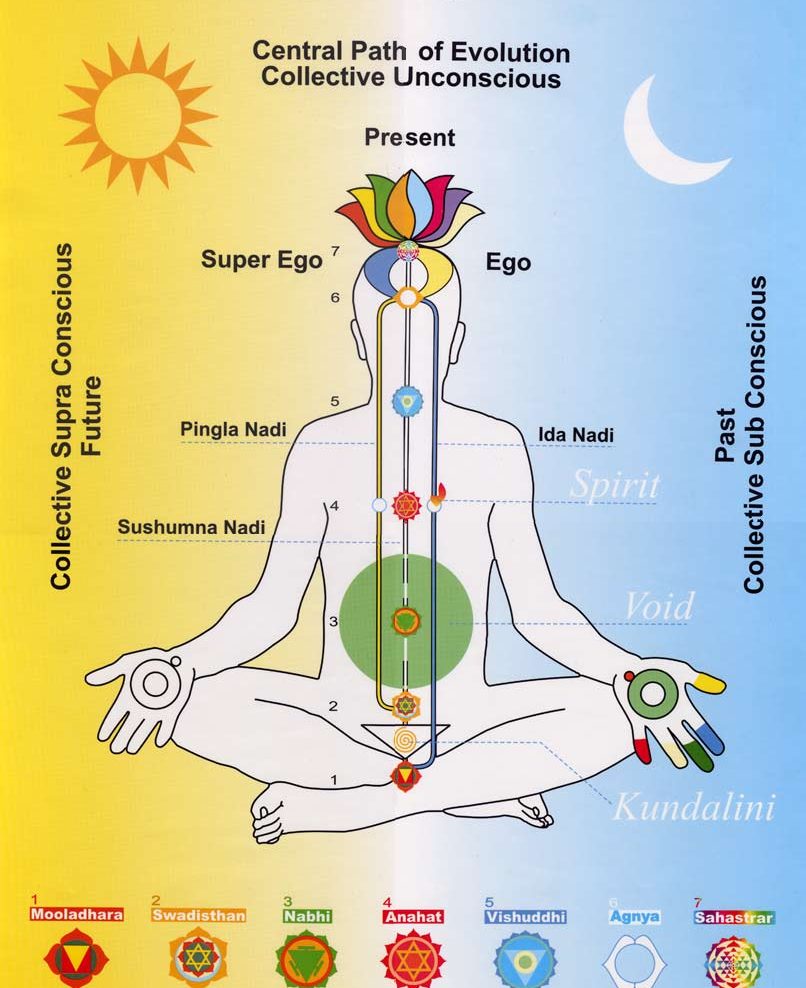 The production of clean energy may be the biggest challenge of our time, but it has been a spiritual ambition of yogis for at least 2,500 years. Today in Waterloo region “outer” energy scouts conduct well-funded research in state of the art labs at our local institutions of higher learning. Meanwhile, a small group of “inner” energy scouts offer free Monday night meditation classes in a rented room at the Button Factory.

The latter are devotees of Sahaja Yoga, a global religious movement founded in the 1970s by the Indian guru, Shri Mataji Nirmala Devi. The energy they aim to cultivate is not solar or geothermal but kundalini, a primal power believed to lie latent at the sacrum in every individual’s subtle energy body.

At a meeting in mid-April, a Sahaja yogi welcomed newcomers one by one before briefing our group of about 15 on the basics of the Sahaja method.

“Kundalini energy rises up from our sacrum and sucks in our thoughts from past and present, producing a thoughtless space that grows with practice. It’s pretty complicated, but actually kind of simple, so let’s just try it.”

With that, instrumental music started playing through the speakers as our guide led us through a seated meditation, moving our awareness and our hands over our body’s various energy centres (chakras) while mentally reciting specific prayers and affirmations.

“O divine, I am the divine spirit.”

“O divine, I forgive everyone.”

“O divine, please give me my self-realization.”

Following the meditation one beginner asked, “What should I focus on?” Our guide responded, “To meditate, just sit with the wish to meditate. You don’t have to do anything. Your kundalini and the divine will interact, and your energy will rise. Think whatever, it doesn’t matter. Don’t try. The energy wants to rise.”

Even so, senior Sahaja practitioners happily helped newcomers initiate kundalini’s flow in a one-to-one five-minute “workshop.” Seated with palms upward in my lap and gazing at a candlelit photo of Shri Mataji, a senior practitioner stood behind my chair encouraging my kundalini through his directed attention and hand movements in the air around me. The group then viewed a short video of Shri Mataji explaining the significance of the heart chakra, the “seat of creation.”

It was only at the meeting’s end, when I was given a pamphlet containing a black and white photo of Shri Mataji, that I discerned the intended significance of my encounter with her through the chakra prayers, energy workshop and video teaching. The pamphlet explains, “Tonight you have gained Self-Realization from Shri Mataji Nirmala Devi. What does this mean? Simply, that the mothering, healing energy called kundalini has been awakened inside you.”

Although the overall design and purpose of these initiatory steps were not easy to identify or understand as they unfolded, each was offered up with a kind of spiritual empiricism: Try this. See if you feel a difference. This was also the explicit context of receiving the guru’s photo from our meditation guide after the meeting: “Try meditating with palms up in front of her image. Experiment. See if it works for you.”

Emory-Moore is a PhD student in religious studies. Through Seeker’s Corner he shares his experiences interacting with the many faiths of Waterloo Region. TCE recognizes that faith and religion are complex, and that a series can’t fully capture the depth or diversity of a belief system. We’d love for you to add to the discussion: info@communityedition.ca.