Listen to the Birds and See Nature in the City

As a resident of downtown Kitchener without a car, I sympathize with those of my neighbours who long for more access to nature. What many downtowners might not realize, though, is that the city is actually teeming with wildlife, who bring their own form of natural beauty to our streets and parks. For me, the key to unlocking this hidden world has been understanding the language of birds.

It might sound like something out of a fairy tale, but it’s plain scientific fact that birds communicate with each other through song. The tweets and chirrups you hear when you leave your house in the morning are actually coded messages about courtship, social boundaries and hidden enemies moving across the landscape. Our heavy-footed human world is overlaid by a taut, invisible web of awareness and ever-shifting conversation. If you can tune into that conversation, you’ll find out a lot about your neighbourhood that’s otherwise out of view.

Understanding bird language is a basic skillset in cultures around the world that have traditionally lived close to the land. The first time I enthused about the five basic bird vocalizations to an acquaintance who was born in Kenya, she looked at me like I was teaching her the first five letters of the alphabet. “Well, yeah,” she said, “that’s how you know where the animals are.”

For the open-eared bird watcher, that’s the payoff. Songbirds like robins, cardinals and chickadees can tell you with their calls, their movements and their body language whether the latest newsflash is an incoming ground predator like a fox or an aerial intruder like a hawk. Crows and seagulls aren’t as revealing; these birds are larger, more confident and generally more interested in humans and human garbage.

My understanding of birds and their ways got a huge boost a couple of years ago when I attended a weekend-long intensive workshop near Collingwood with Jon Young, master tracker and bird language enthusiast. It was fall migration season, and about forty of us rose from our tents before dawn to crouch in a misty meadow edged with forest, taking notes on the bird sounds and movements we observed. 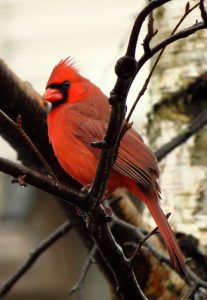 After about an hour we gathered to compare notes. Several people had seen a northern harrier, a large bird of prey, swoop by and startle some robins. Young posed a few precise questions about the robins’ alarm calls and positioning, then asked whether anyone had seen the cooper’s hawk hunting in the wake of the harrier, using the disturbance caused by the bigger bird to conceal its own movements. None of us had.

It wasn’t long after that that I had my first encounter with a cooper’s hawk. I was walking slowly down the Iron Horse Trail, deep in thought. Suddenly I was struck by how deafening the silence was — no songbirds were singing out anywhere nearby, or even sounding their distinctive alarms. I stopped, looked up, and saw the hawk preening its feathers on a low branch, not 30 feet in front of me.

Kitchener and Waterloo are packed with hawks and other birds of prey. Finding them in the city is actually much easier than in the countryside, where hiding places are more plentiful and the birds are sneakier. Since that first encounter I’ve become attached to a pair of cooper’s hawks that nest near the train tracks in Victoria Park. I’ve seen these cunning hunters use passing humans, passing crows and even passing trains as cover for their stealth attacks. When I hear the cardinals sounding their unmistakable ‘chik! chik!’ alarm, and see the robins and chickadees dive into the nearest thicket, I smile and look around for my friends.

The greatest lesson I’ve learned from studying bird language is that nothing in nature is random; everything birds and other animals do has a meaning. If you can learn to quiet yourself and pay attention to their signals, not only will you be able to see and hear the wildness in the heart of the city, you’ll be able to read powerful meaning where before you may have perceived only chaos.

Jon Young has an excellent book on bird language called What the Robin Knows: How Birds Reveal the Secrets of the Natural World, which can be found at the Kitchener Public Library. As the weather warms and nesting season gets into full swing, I’ll be found more and more often along the wild creeks and trails of Kitchener.