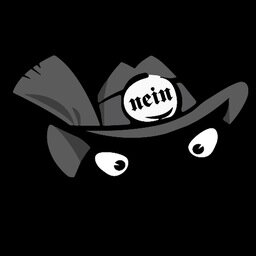 Interview with an evil mastersteind

Many of us are familiar with Onkel Hans, the mascot of Kitchener-Waterloo Oktoberfest. But this year, we are being introduced to his unofficial brother Evil Hans, who appeared on the scene a month or so ago.

Having first posted an ad on Kijiji, August 28th, calling for henchmen and Fräulein Fatales to join his league, he has since started his own webpage, and created popular Twitter and Facebook profiles. His goal is to promote local businesses, wreak havoc on his brother Onkel Hans, and enjoy ‘gut’ beer over the month of October.

Evil Hans talks on about secret ‘EvilHans’ hideouts during the Festival, but we haven’t heard much about him personally. Who is this mysterious, social network using, beer swilling vigilante?

“Vell you know, it vas quite a difficult dissolution between meine brother und I,” Hans explained via email. “I needed ze time to find myself. Now, on ze 45th anniversary of ze Oktoberfest, I feel zhat it is a time to unite ze people in an uprising und remind zhem zhat Oktoberfest is a time for community.”

He continues to preach about being for the people, of the people. His plans involve bringing more patrons in to local restaurants and business. “Meine ambition is for people to hold zheir own events, or contact local venues to hold ‘EvilHans’ events, to make sure ve are driving people to ze local businesses.”

When asked who was the older or younger brother, Evil Hans or Onkel Hans, the mysterious man wouldn’t give too much away. “Ve are ze same age….kind of. You see time moves very differently for meine brother und I…. und I don’t know if you have noticed, but meine brother und I have a very different look und shade to our skin. Ze fact is, ve hide a deep and mysterious secret vhich cannot be shared….all I can say though is vith good beer comes eternal youth.”

When not out planning destruction and causing mayhem, Evil Hans says he likes reading und spending a lot of time underground in his lair beneath Victoria Park. Why Victoria Park? “Ze taxes vere far more preferable zhan Vaterloo, und it vorked out much easier to tap into ze public vater und power lines.”

Evil Hans says not to expect too much this Festival, as he has only just returned from a long journey. He is hopeful that the small outreach he has started will grow and spread, though he faces some challenges, what with being a six foot tall mascot.

“It is hard to be taken seriously und run an inconspicuous uprising of community endorsing decent beer drinkers, vhen you are a 6 foot tall organic fuzzy individual in lederhoser,” he said. “Vhich is vhy I instead opt for an ‘all in black’ kind of look und ze social media for recruiting of ze henchmen und fräulein fatales to carry out meine plans.”

He does however, find his job as an evil brother und Mastersteind easy. “It is not zhat difficult, too be honest, vith all of ze gut beer zhat we have around us in zhis area, it is not difficult to get ze ‘creative juices flowing’.”

Evil Hans refused to reveal the true identity behind his mascot’s mask, so for now, we’ll continue to wonder who this mysterious dark figure could be.