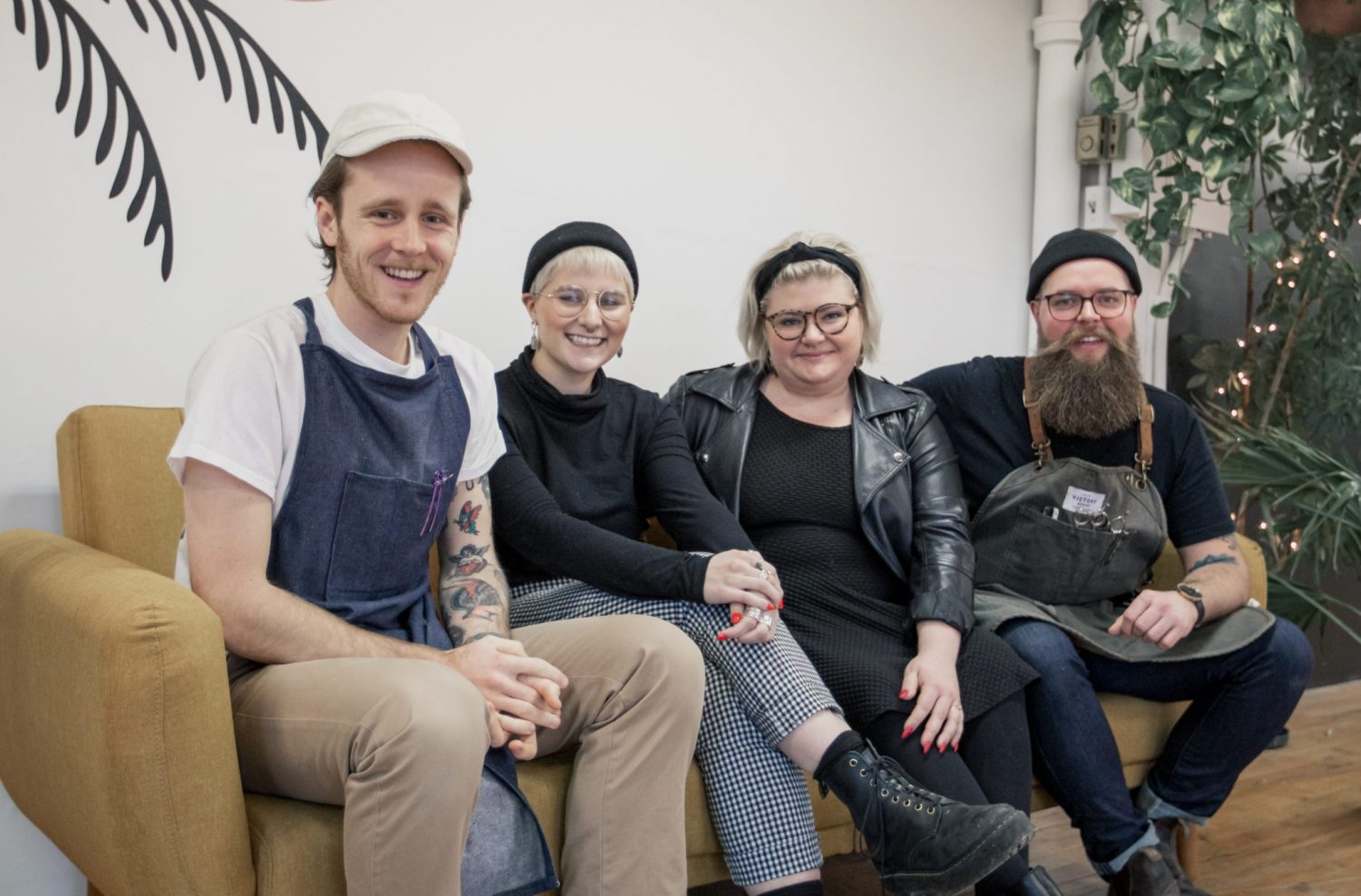 Good Hair Co. Creating a Getaway for their Clients

Owners and hair stylists of Good Hair Co. salon and barbershop, Peter Greaves and Sydney Laurie, have an undeniably warm-hearted approach to cutting hair and ensuring that everyone feels welcome and at home while they do.

On Nov. 29, 2019, located at 154 Victoria St. S. , Good Hair Co. celebrated their grand opening while sharing their space with local artists and other small businesses by hosting a night-time vendor market.

“We started thinking about all the awesome clients that we have that are [artists] and thought why not give them a space to showcase their work as well. It just seemed fitting,” said Laurie.

“It was about supporting the people that support us, and drawing all of our communities together,” Greaves added.

Good Hair Co. looks forward to hosting all kinds of events in the future and almost have a full line up of vendors for another market this upcoming spring.

Greaves and Laurie give high praise of their other stylist Kelsey Martin and barber Adam Zrebiec, and describe them as having “mind-blowing talent.”

“We’ve got this group of misfits together, and we are like a cute family, we do everything together. It’s kind of disgusting,” said Laurie.

The husband and wife duo had previously pursued careers in the cafe industry and graphic design, but ultimately found their calling in the hair industry.

“I was really lonely working from home, and I didn’t want to stare at a computer screen all day. I needed something a little more interactive with the community and people,” Laurie said about working as a graphic designer.

Her mother who had been a hairstylist for 30 years, sparked her interest in the hair industry through a phone conversation.

“A light bulb just went off. Literally the next day I signed up for hair school and have not looked back since. It is definitely what I am meant to do. And I think Peter saw how much life satisfaction I was getting out of it, and saw that was something he wanted to do as well.”

“Peter and I wanted to create our own vibe, our own space, and we just wanted something we could show to the community that was ours,” said Laurie.

With that sentiment, the duo sought out to create a safe space that catered to everyone’s hair needs, which is what they felt was missing in the local hair community.

“Opening a space welcoming for everybody is an important part for us,” said Greaves.

“There are salons for women and barbershops for men, and if you don’t fit in anywhere in between then there’s nowhere for you. Whereas we are a duo that can do both, so it seems like the most clear thing for me, if you have hair, we will cut it. And that’s kind of where it stops. I don’t know why we have to have these segregated places,” said Greaves.

“Not even just in a gender scenario, but also for people who aren’t comfortable in a salon or barbershop, because it’s an intimidating space to walk into, and we kind of wanted to just eliminate all of that,” Laurie added.

Good Hair Co.’s palm tree logo is meant to represent a little oasis or getaway for clients. The branding for the business comes across as bright, fresh and relaxing.

“I read a quote about how the best kind of branding is just being yourself and that has been a really core thing for us, that everything is very genuine and real, and it might not fit into a high-end luxury salon or a traditional barbershop; it’s kind of somewhere in the middle, but it’s just very us and that speaks for itself. We don’t need to try, that’s just what it is,” said Greaves.

Although Greaves and Laurie feel proud of their new space, they speak openly about the many trials and tribulations of opening a business.

“I commend entrepreneurs that do it on their own because it’s really hard,” said Laurie.

When asked what it is like to be partners in business and in life, Greaves said, “I couldn’t imagine doing it with anybody else.”