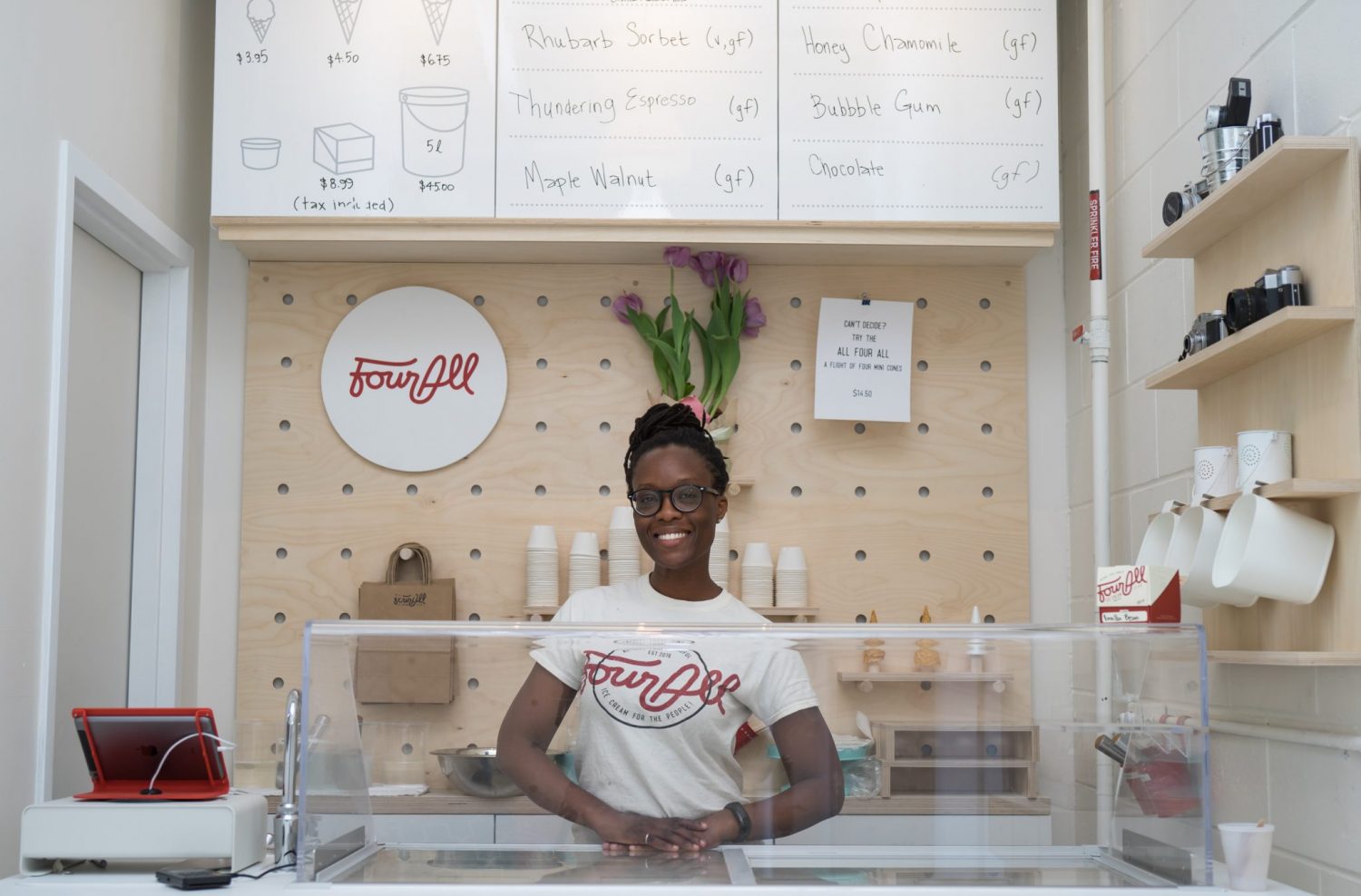 Four All Ice Cream is a locally sourced treat with inclusion and dietary restrictions in mind. Their tasting room is located at 141 Whitney Place in Kitchener and their ice cream is available at various locations around Kitchener Waterloo. But what happens when we approach the colder months? Do people still buy ice cream, a dessert typically associated with summertime?

The owner of Four All, Ajoa Mintah and marketing coordinator and ice cream maker Larrissa Jerome, explained that ice cream is not only a summertime treat and can be enjoyed all year round.

Four All has a lot more to think about then the average ice cream factory due to the fact that they have new flavours each month. As well, in the winter months they will be focusing on a specific theme in order to engage the community with their curiosity and their taste buds.

“[Four All already] has a huge list of constraints now we are going to constrain ourselves further by making [ice cream] that wraps around a theme — but that’s what we do and that’s the challenge of what we do,” Mintah said.

Mintah explained that the tasting room isn’t the only thing that makes Four All unique. Four All is a provincially licensed ice cream factory, which means that they work all year round to produce quality ice cream with diversified flavours like cream of earl grey and honey, as well as accessible options like vegan candy cane hot chocolate with candy cane sprinkles

“We [just] don’t see ourselves as an ice cream shop,” Mintah said.

“We are an ice cream factory. We went through all the extra effort to go through the licencing process, were provincially inspected and so we run year-round so we make a product that people consume year-round.”

Many surprises are in store for customers who want the latest scoop on all things Four All this holiday season. Four All will be starting an online ice cream subscription program expected to launch in the beginning of December.

“The online store has been our creative focus and baby … We’ve got some Christmas flavours and holiday flavours coming out and then winter lasts for several months so were kind of going with a different theme to focus on each month,” Jerome said.

Mintah explained that the online store has always been a priority.

“[At the beginning] we were only ever going to be a delivery company initially because we wanted to make it accessible for people,” Mintah said.

“[However] … it didn’t go that route but it was always in the back of our minds. The reality is ice cream is seen as something that is seasonal, so the idea of these home deliveries is to break through that seasonality.”

Jerome and Mintah explained that their ice cream subscription service will allow customers to have four ice creams chosen for them and then have them delivered right to their door step or picked up in store.

“Each month we will have four unique flavours for you based on our seasonal flavours. You never really know what you’re going to get. It’s always just going to be a surprise at your door step. This is probably the greatest subscription program you can ever sign up for,” said Jerome.

Another service that Four All plans to introduce is their online store that will have ice cream swag like their already introduced pins, a collaborative project with local graphic designer Jon “BRFC” Johnson.

Four All is definitely not slowing down these winter months. If anything, they’re heating things up with this cool treat. The seasonal ice cream flavours based on specific themes, a delivery service focused on accessibility, as well as an online store and subscription program is how Four All plans to keep customers eating ice cream during Canadian winters. However, Mintah believes that only eating ice cream in the summer is a myth.

“People don’t just stop eating it because it’s winter. People may [walk] outside less to go and get, but we wanted to break through that and we wanted to have a way to get ice cream to people that love our ice cream.”