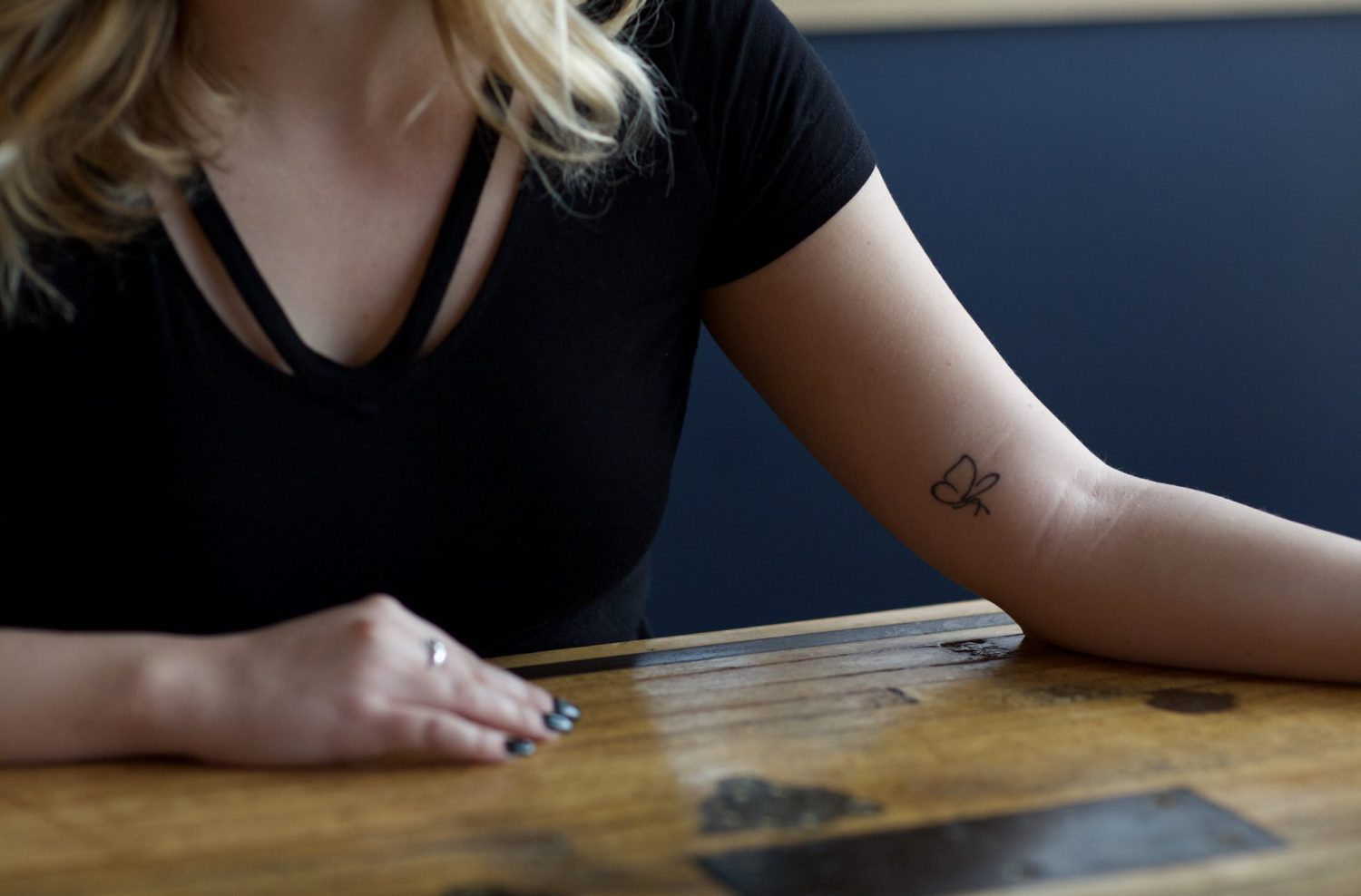 Our Ink, Our Stories: A Folded Butterfly

On the inside of Victoria Wood’s left elbow, is a tattoo of a folded butterfly. The tattoo is small, consisting of only thin, black lines. To anyone who doesn’t know her, the tattoo can almost go unnoticed, but for Wood, the butterfly signifies strength, resilience and family.

“The official symbol of thyroid cancer is the butterfly and the thyroid itself butterflies in your neck, so that’s why. You have your left side and your right side, so it looks like a butterfly,” Wood explained.

The official symbol for thyroid cancer, the butterfly, holds deep meaning to Wood and her family. In 2012, Wood’s father, Todd Wood, found a lemon sized lump in his throat while shaving. After finding the lump, doctors confirmed that it was thyroid cancer and had the lump, as well as his entire thyroid, removed. After doing radioactive iodine treatment, Todd’s experience with cancer appeared to be over.

A year later, the cancer came back in his lymph nodes. He had another successful surgery, and once again, the process appeared to be over. Around Christmas time in 2015, however, cancer was found in his lymph nodes again. This time, doctors did a full ear-to-ear removal, and he’s been cancer-free ever since.

“The doctor did mention, though, that in his lifetime he’ll probably have to have one or two more of those,” she said.

Wood explained that although they have a tremendous amount of family support, the experience of having a sick parent is still stressful and emotionally draining.

“You hear the bad news, but then you hear the good news and you’re like, “Oh, it’s done.” And then obviously you have to go through the cycle again,” she said.

Since the two-year mark of her dad’s last experience with cancer is approaching, Wood finally decided to get her butterfly tattoo, something she had been planning for a while. She wanted a tattoo that had to do with her dad’s experience with cancer, without being too direct, like the common ribbon. The tattoo was done by Sam Mansbridge at Mom’s Tattoo Shop in Waterloo.

“I wanted to get something that resembled a butterfly, but wasn’t the typical butterfly tattoo. I like tattoos that are simple line drawings [to match my other tattoo]. I came across a drawing online that was just a simple folded butterfly, something not too graphic or intricate, just something simple, like my dad almost. He’s pretty simple and carefree,” she said.

The tattoo was supposed to be a surprise for Todd, but he saw it while helping Wood move a month ago. She got warm and took her sweater off, showing her bare arms — and the tattoo.

“He loves it and he loves anything supportive I do for him for thyroid cancer. He’s really touched by it,” she said.

Although Todd is cancer-free, he still feels the effects of being a cancer-survivor every day.

“Having your thyroid removed — your thyroid produces calcium for your body, so he has to have daily medication, daily calcium pills, which obviously puts more stress on him to have to remember to take those,” Wood said.

“And then, just from all the surgeries, his neck and his back are so stiff, just because when that heals again, your nerves tighten, your muscles tighten, so he goes to physiotherapy. That’s probably his biggest struggle now, is the soreness that he constantly feels. But even through all that, he fights through it every day. My mom’s [also] an amazing help for him.”

And that’s the whole point of her tattoo. The butterfly acts as the beauty after the storm, a perfect metaphor for healing, strength and family.

“I wanted a constant reminder of his strength permanently on me,” she said. “Just to remind me that there are tougher things that you can get through in life when I think about my minuscule little stresses.”

Our Ink, Our Stories is a collaborative project we have with The Kitchener Public Library. Read more stories at ourinkourstories.com.