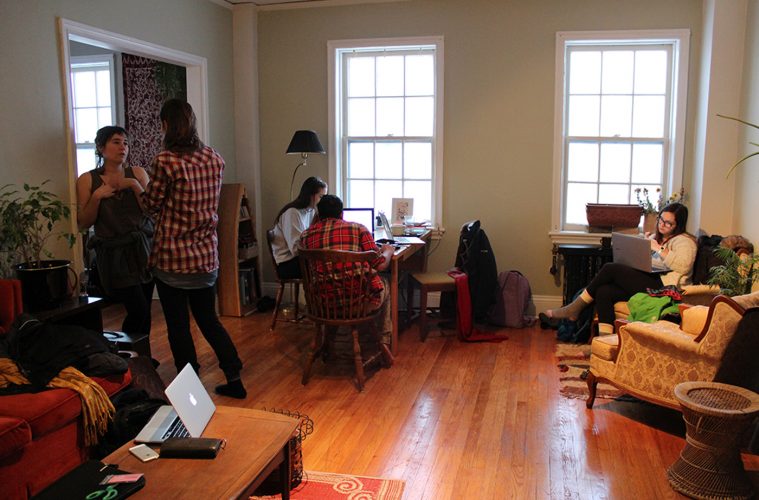 It started in the elevator. A woman and her dog came through the front door of downtown Kitchener’s York building just after Apartment Café organizers buzzed me in. I guess I stood out as a non-resident—probably because I couldn’t figure out how to use the ancient-looking elevator. She asked what I was doing and I explained that I was headed to the seventh floor for Apartment Café, the brainchild of Kitchenerites Sam Nabi and Sarah Pearson.

Like the name suggests, Nabi and Pearson started a “café” in an apartment. Once a week from 11 in the morning until seven at night they open the front door of Nabi’s place and let locals drift in and out to work in his living room. Places like Communitech and Velocity provide co-working space for tech companies, but the same does not really exist for creative types. Less formal than their tech counterparts, Apartment Café is a space for people who would typically work from home to spend their day in a comfortable setting working alongside others.

When I first heard about the café I thought it sounded like my worst nightmare. [Editor’s note: Megan said, “That sounds like my worst nightmare.”] The joy of working from home is that I don’t have to put on real pants, and that if I choose to venture to a cafe, I can retain my anti-social tendencies but with better food. So I’m obviously not the café’s target co-worker.

The cafe is open every Wednesday—Nabi and Pearson have committed to hosting for at least the next two months—and I dreaded going all morning. With my interest in interacting with strangers diminished after my elevator encounter, I approached the open door of apartment 73.

Four or five people were spread across Nabi’s apartment, quietly working away over laptops and notebooks as I bit the bullet and entered. The sound of local musician Evan Pointer was streaming while Nabi, a freelance web developer, and Pearson, a musician and music therapist, shared kitchen duty and worked away simultaneously. The Cafe offers things like coffee, kombucha and soup—all homemade or locally sourced—and accepts (but does not require) donations from attendees.

Pearson and Nabi share the feeling that going into a stranger’s home (and vice-versa) is not that weird. They frequent house shows in the area and seem totally comfortable opening their doors to the community. People do it for lodging on sites like Airbnb, so why not for co-working?

I work in an office, where a lot of my day is eaten up with chatter among co-workers, but usually our best ideas, solutions and projects come out of side-conversations and encounters that initially seemed like distractions. Can Apartment Café provide that networking and brainstorming utility for people who may otherwise spend all day alone in their home office?

Ultimately, Apartment Café was a much less awkward experience than I expected, and it was obvious that some of the others working were completely comfortable. The previous week, there were as many as 15 people working away at one time, which is the max the apartment can hold while providing seats for everyone. Nabi and Pearson each said there were points where they didn’t know anyone in the apartment. Other weeks they’ve had friends around. On the day I went, they seemed to know everyone who came in and out—I felt like the only unfamiliar face.

I managed to stay for a few hours, and I didn’t hate it. I also got way more work done than I would have at my office. The few hours I was there were quiet and focused. Coffee was poured and music was played, but the activity was at a minimum. What was really cool about the space was the option to quietly work or socialize with like-minded people (not that I actually would have socialized).

Pearson and Nabi have created a unique space that is likely to inspire similar home openings around Kitchener. On the days I work from home, it’s way too easy to become trapped in a vortex of talking to my cat while being distracted by snacking and television. The Apartment Café provides a comfortable space to work without the typical café pressures to buy more food or leave after a few hours. I hung out, I worked and I’ll probably go back next Wednesday. I might even talk to people next time.