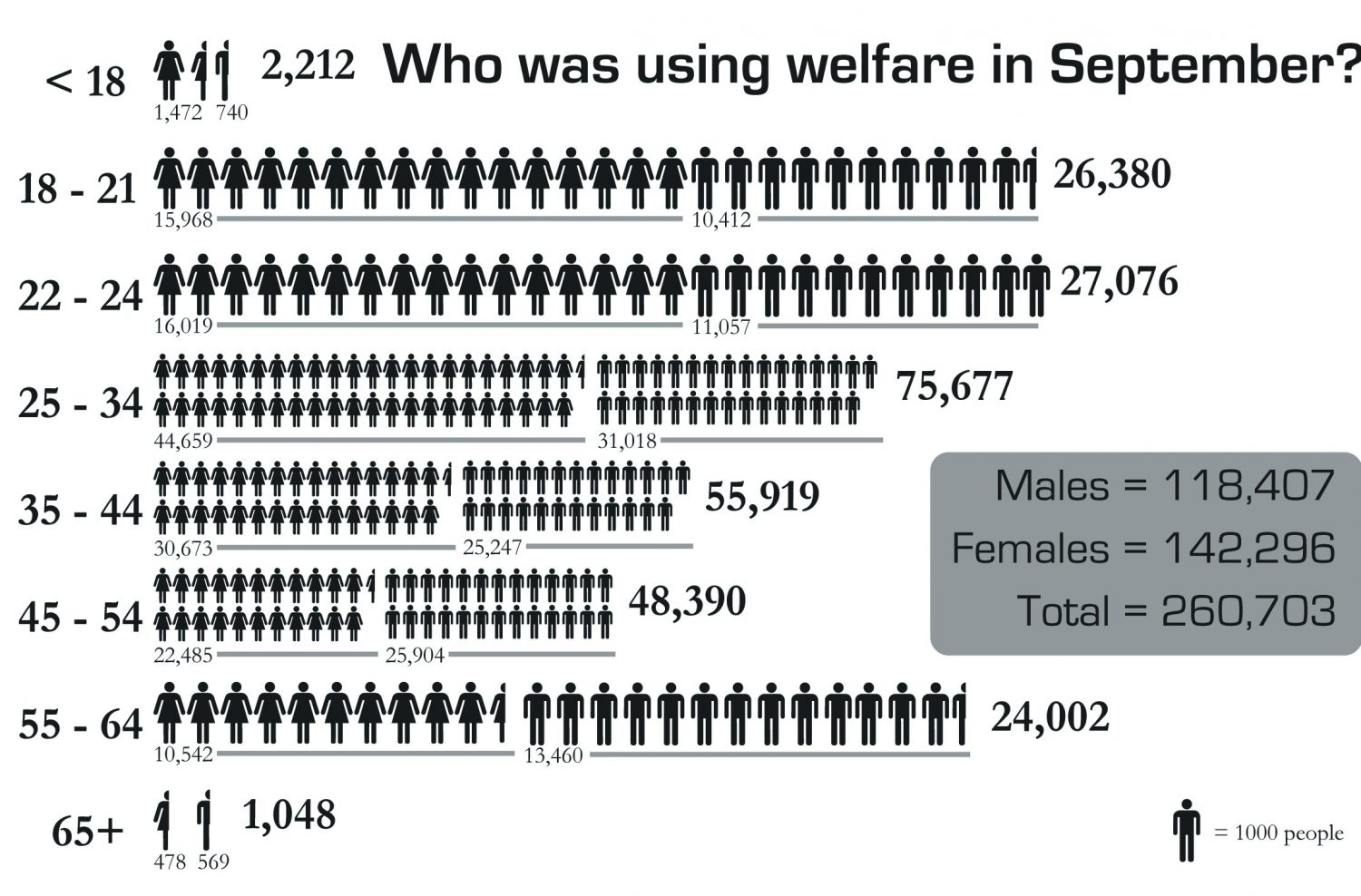 Making the decision to go on social assistance is a difficult one for many people to make. But an increasing number of people affected by tough economic times are turning to an overburdened social support system that may not have the resources to support them.

Dave* graduated from a well-regarded university in southern Ontario. After graduation, he found himself struggling to find employment. “[Social assistance] was definitely a last resort,” he says. “I had to work myself up to doing that. It was only when other people who were on the system told me ‘don’t get kicked out of your apartment!’” Anecdotally, he could count of a number of other people like him — young and educated at the undergraduate level — who are scraping by on Ontario Works or via savings.

Getting a sense of who actually needs Ontario Works isn’t easy given the sheer number of people who access the program on a monthly basis. “I think it’s generally difficult to categorize it, especially in this economic turmoil,” says Ian Stumpf, an organizer with Poverty Makes Us Sick, an advocacy group based in Waterloo Region. He estimates that about 17,000 people in the area use social assistance every month. Across Ontario, a total of 472,160 people benefitted from Ontario Works in September alone; a further 419,750 accessed Ontario Disability Support Payments.

But a look into who is actually receiving social assistance uncovers some interesting, and troubling, trends. Based on statistics provided to the Cord Community Edition by the Ministry of Community and Social Services, the amount of women — especially young women — accessing Ontario Works far outpaces men. In September 2012, 44,659 women aged 25 to 34 were on the Ontario Works caseload. In the same age range, only 31,018 men were — a difference of about 13,000 people. The CCE wasn’t able to procure further statistics by press time, but Sandy Mangat, a media representative from the Ministry, told us that these numbers were about average.

The number of single people and sole parents on welfare has, however, jumped up. Between September 2010 and September 2012 there was a 6.6 per cent increase in the number of single people taking advantage of the service. It doesn’t sound like a huge leap, but keep in mind this percentage increase represents 9,166 more Ontario Works cases in the span of 48 months. It’s as if the entire undergraduate population of Wilfrid Laurier’s faculty of arts signed up.

With the number of single people on Ontario Works high, and the amount of young people currently unemployed or under-employed, it’s not hard to make the assumption that this is quickly becoming a resource for people who may not have been there in the past. “One time I was going to social assistance, and on the way I ran into two friends who had been on it,” says Dave. “As I was leaving, I ran into two more friends on their way to sign up.”

With the October unemployment rate in Waterloo Region at 6.1 per cent, people are still continuing to access social assistance in high numbers. “Being one of the larger centres [in Ontario] we have a high concentration,” says Stumpf. The burden on Kitchener-Waterloo to provide services has just become heavier, thanks to a decision from the province to cut the community start-up and maintenance budget, a source of funding that assists people who find themselves needing new goods for work or home.
“Cuts to the CSUMB [Community Start-up and Maintenance Benefit] are going to especially affect young adults and women fleeing violence in the home,” says Stumpf. With housing prices continuing to rise in the region, he predicts that Waterloo homeless shelters will continue to be stretched to their breaking point.

“[The] CSUMB has kept people in housing many, many times in our experience,” says Sharon Twilley, executive director of Waterloo Region Community Legal Services. Because qualifying for Ontario Works requires that you be absolutely destitute, Twilley worries that people will suffer without having any kind of cushion to support them. “If people have had an unexpected expense they have no leeway in savings. Something really small, like buying winter boots, can put people between buying boots and paying the rent.” Her office finds itself dealing with clients who have to fight these kinds of battles with Ontario Works.

With Kitchener-Waterloo now forced into footing more of the bill for social assistance, and more people signing up, it’s difficult for them to meet the rising need. “It comes very unexpectedly that the province would transfer this amount of responsibility,” says Stumpf. “David Dirks [director, employment and income support for Waterloo Region] has been fairly open that they will struggle to meet those needs.” Some municipalities have even refused to take on the added costs.

Dave’s story ended on a happy note. He was able to find employment in his field of choice and suspend his social assistance. But his frustration with the system remains. He recalls trying to get in touch with his Ontario Works caseworker to tell her he was employed. “I couldn’t get in touch with her and her phone message actually said not to leave a message,” he says. “Ontario Works can’t really provide a support that users would need to get back into the workforce.”

A new review of social assistance in Ontario released recently made a number of recommendations for repairing the system, including merging Ontario Disability Support and Ontario Works. Twilley sees some helpful perspectives in the report but has some concerns about whether they’ll actually be enforced. “The recommendations fit together. It’s like a jigsaw puzzle — if you just pick a few pieces out of the puzzle, the ones that you like, and go ahead with that without taking into account their impact when the other recommendations get ignored, it may make things worse.” She’s seen past reports simply ignored by other provincial governments. It leaves more and more people seeking financial help from the government in a precarious position.

*Name has been changed to protect the identity of interviewee.