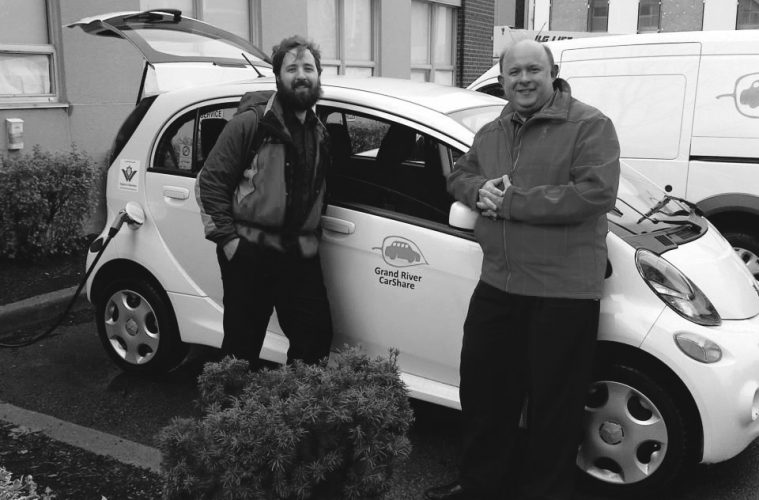 Don’t let the coming snowflakes fool you — Waterloo Region is getting greener.

It’s a perfect fit for the co-operative, which promotes a sustainable transportation system. But executive director Dave Steffler says there were obstacles.

“At this point in time, the infrastructure is still in its infancy,” he said. “In order to get this vehicle in place we had to have a charging station installed.”

Steffler gives a lot of credit to the Region of Waterloo for the new addition. Not only did the Region install the charging station at its administration building, but the co-op purchased the Mitsubishi i-MiEV in part with a $15,000-grant from the Region’s Community Environmental Fund.

The car officially launched Oct. 17, and Steffler says it’s been used every day since. Of course by now, the co-op is used to success.

Grand River CarShare began in 1998, based on a model that had already gained popularity in Europe. Members reserve a vehicle just when they need one – insurance and gas included in the rate.

It fosters what Steffler calls a conservation ethic. “When you own a vehicle and it’s sitting in the driveway, it’s easy to use because it’s there,” he said. “When you’re paying per use you’re much more aware of how much it’s costing you.”

The idea took off — the co-op now has 23 vehicles and 700 members between its Grand River and Hamilton branches.

“You can rent per hour, which is very convenient for me, and it’s cheaper than owning a car,” said CarShare member Suzie Nunes. She said the co-op fills in the gap when she needs to get somewhere in a hurry, or out of reach of public transit.

Nunes hasn’t had a chance to take out the co-op’s i-MiEV, but is looking forward to the opportunity. “It’s another way to promote healthier means of transportation.”

As its Waterloo Region fleet grows, Grand River CarShare is also looking to expand its market across Southern Ontario.

It’s currently evaluating interest in Niagara Region, Elmira and Cambridge, and Steffler says they’ve had inquiries from London and Peterborough.

“It’s still a fairly new concept to a lot of people, but our hope is that with time it’s going to become the social norm.”