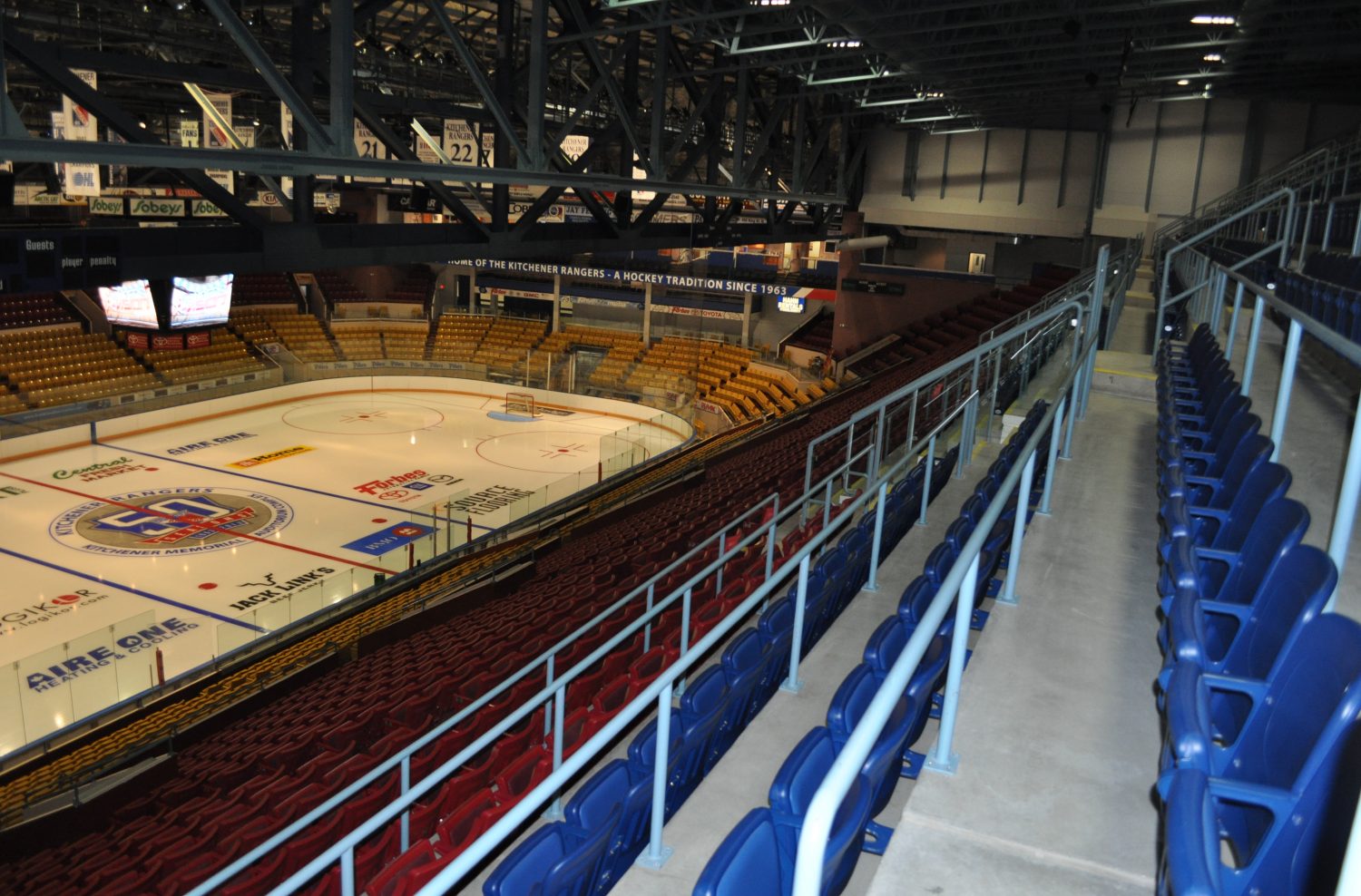 After $12 million in renovations, the Aud is close to welcoming visitors. – Carrie Debrone Kitchener Citizen

If you haven’t already had the chance to visit the expanded Kitchener Auditorium you will be able to see the changes in the New Year when an open house, official grand opening and public tours will be offered.

“Its been a long road and I know it’s been a very long road for the players,” said Steve Bienkowski, chief operating officer and governor of the Kitchener Rangers, as he lead a media tour of the expansion project on Oct. 18.

The $12-million Aud expansion project, which added 968 new seats to the facility and raised its seating capacity to about 7,500, met all its construction deadlines.

The Kitchener Rangers funded the expansion — a move made possible by a repayable loan from the City of Kitchener based on a 15-year repayment schedule.

The newly-completed renovation is a scaled-back, less-costly version of the original Kitchener Rangers proposal tabled in 2010, which sought approval from city council for a 3,500-seat expansion that would have cost about $65 million.

Underground water pipes were installed in stage one, with stage two completing the connection of the new water source and relocating the Ranger’s offices, dressing room and medical facilities to 35 Sportsworld Drive so the expansion could continue.

Stage four work began, April 11 as cranes were erected to prepare for the initial raising and installation of rink-length steel truss framework for the expansion that would be completed in several weeks. Interior work on the Rangers offices and medical facilities continued and framing for the three-level addition began. The first level now houses the concourse that supports the new seating area and concessions. The second level is the ‘Legends’ level with five private suites, NHL, CHL and Media Lounge and the Rangers executive boardroom.

Stage five saw significant changes to both the seating expansion and the interior dressing room area. The flooring of the new concourse level was installed to accommodate the concessions and washrooms for the new seating area. The erection of trusses for the new roof over the expansion allowed completion of electrical wiring, drywall and other interior fixtures.

In stage six, the new arena roof was completed on schedule and the Aud was closed to the public on July 23 to allow inside construction to continue and the elevator shaft to be completed.

The last construction stage included the milestone event of removing the old roof over the arena.

Stucco work began on the Ottawa Street side and inside the seating area was prepared, ready for seat installation mid-September and the floors were sealed. Stairs were poured and railings for the upper levels constructed. The dressing room and business operations areas neared completion, with furniture and equipment installed in October. In the arena, ice making began in mid-October.