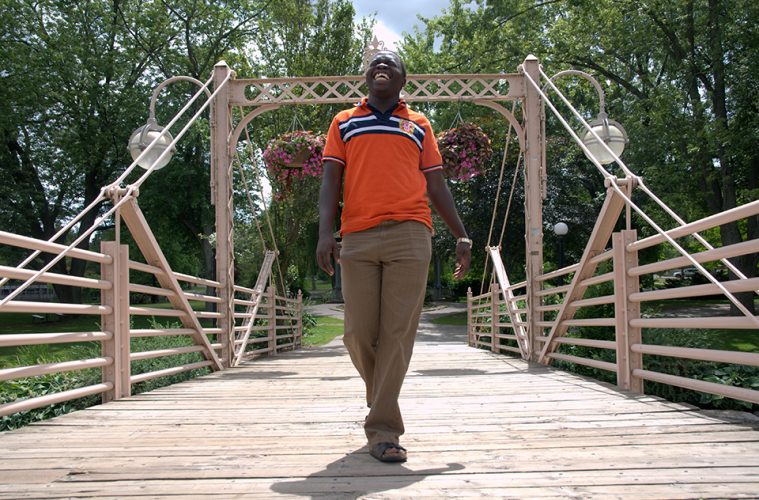 We All Come From Somewhere

“As a child in a time of war, when you hear your name you do not resist the call, you just go.” Rudi Okot shares these words at a bustling Kitchener Tim Hortons, nearly ten years after he came to Canada as a refugee. In a few weeks Okot will cross the ocean again, this time in the other direction, to work with refugees in the Middle East.

The United Nations High Commission on Refugees (UNHCR) estimates that there are currently roughly 20 million refugees worldwide. And while recent public attention on refugee concerns offers hope, the “refugee crisis” did not begin when the tragic photo of three year old Aylan Kurdi was first published. For many reasons, different conflicts receive different amounts of attention over time. Recently, Syria has been in the spotlight. A number of years ago, the conflict in South Sudan was making headlines.

Indeed, it was 19 years ago, in what is now South Sudan, that nine-year-old Okot awoke to the call of his name and sounds of gunshots ringing through the midnight air. Under the cover of darkness his family fled, and the morning light revealed their home flattened and their neighbours murdered.

Okot, who had already been dealing with being separated from his father, began a long journey with women and other children. Every rumble of a plane overhead brought anxiety, and the threat of bombs. Inching forward, the front vehicle of the convoy was destroyed by a landmine, killing most inside. The rest of the group had no choice but to keep moving.

Their convoy approached Kaya, a town recently captured by rebels, who took them in. Safe until their food ran out, they fled again to refugee camps in Congo, and eventually to Uganda and Kenya. In the rebel controlled areas of Sudan money was worthless, but in the Congo, Okot remembers picking up grains of rice that would fall from the ration bags being handed out by relief organizations. He sold that rice to pay his school fees while living in refugee camps. After finishing high school he began to teach, until one day he received an unexpected call from what seemed another world: Canada. It was his father.

Until that fateful phone call, Okot had assumed his father dead for most of the 11 years they had been separated. In fact, his father had landed in Kakuma camp in Kenya, and with the help of Reception House, a refugee support organization in Kitchener, was welcomed to the area. Other of Okot’s relatives were later sponsored by a local church.

Last year Canada ranked 41st in the world on a UNHCR list of refugees per capita. The current government recently committed to settle 10,000 Syrian refugees, but this is misleading: it does not create new spaces, and means there are now 10,000 fewer spaces available to non-Syrian refugees. While the numbers of refugees around the world continues to climb, our commitment to refugee resettlement stays the same.

Canada was built on the forced displacement of many millions of indigenous peoples, and since then has been formed by people who came here for a better life. We did not always trickle slowly onto Canadian soil. In 1979 the Canadian government worked with private sponsors to bring 60,000 Vietnamese “boat people” to this country within 18 months.

The forces that drive people from the places where they fell in love, prayed and laughed are powerful, and often have connections to Canadians. Our budget for military support of the US campaign in Syria, which includes the bombing of Kobani, the town where Kurdi was born, is over half a billion dollars. Many of our economic, environmental, and military policies play a critical role in creating the very circumstances that create the refugee crisis.

Canada is no replacement for home, no antidote for trauma, and in the face of government inaction, civil society’s many arms are organizing to create safe places for people fleeing violence. The Mennonite Central Committee (MCC) is running an online “S.O.S. for Syria” campaign, and generally acting as a resource for individuals or groups interested in sponsoring families. Another way to act, of course, is to vote, and to consider each party’s stance on the roots of the refugee crisis, from conflict prevention to response. Politicians respond to citizens, who can demand we accept more—or less—refugees, and also that they are treated with dignity—or not—upon arrival. The organizing group No One Is Illegal carpeted the entrance to the recent Munk foreign policy leadership debate with the names of the more than 20,000 people who have died trying to cross the Mediterranean.

Okot arrived to Canada nine years after fleeing his home in South Sudan, sponsored by his family through the same MCC program that continues to support refugees from Syria and around the globe. He wasted no time becoming a passionate community builder, studying as an undergraduate at the University of Waterloo, and then completing a master’s degree in Ottawa. He has developed local peace-building groups in Waterloo Region, and was the secretary general for the Kitchener-Waterloo South Sudanese Community Peacebuilding Task Force, which seeks to mitigate, manage, and transform the impact of the ongoing South Sudanese conflict.

Now he is in the Middle East, working again with MCC, helping refugees along their search for safety, and supporting peace-building programs operating all over the region.

As he puts it, still in a sunny corner booth at Tim Hortons, “for me, it is a calling, a conviction. That is why I am going. If I wanted money, I could find a job here. It’s just about making a difference.”

Okot knows first-hand the importance and impact of such work, here in the Region, and abroad. Like countless others, the word “refugee” does not represent the richness that Okot continues to offer the world as he moves forward along his journey, making a difference in the lives he touches here in Kitchener-Waterloo, and around the globe.