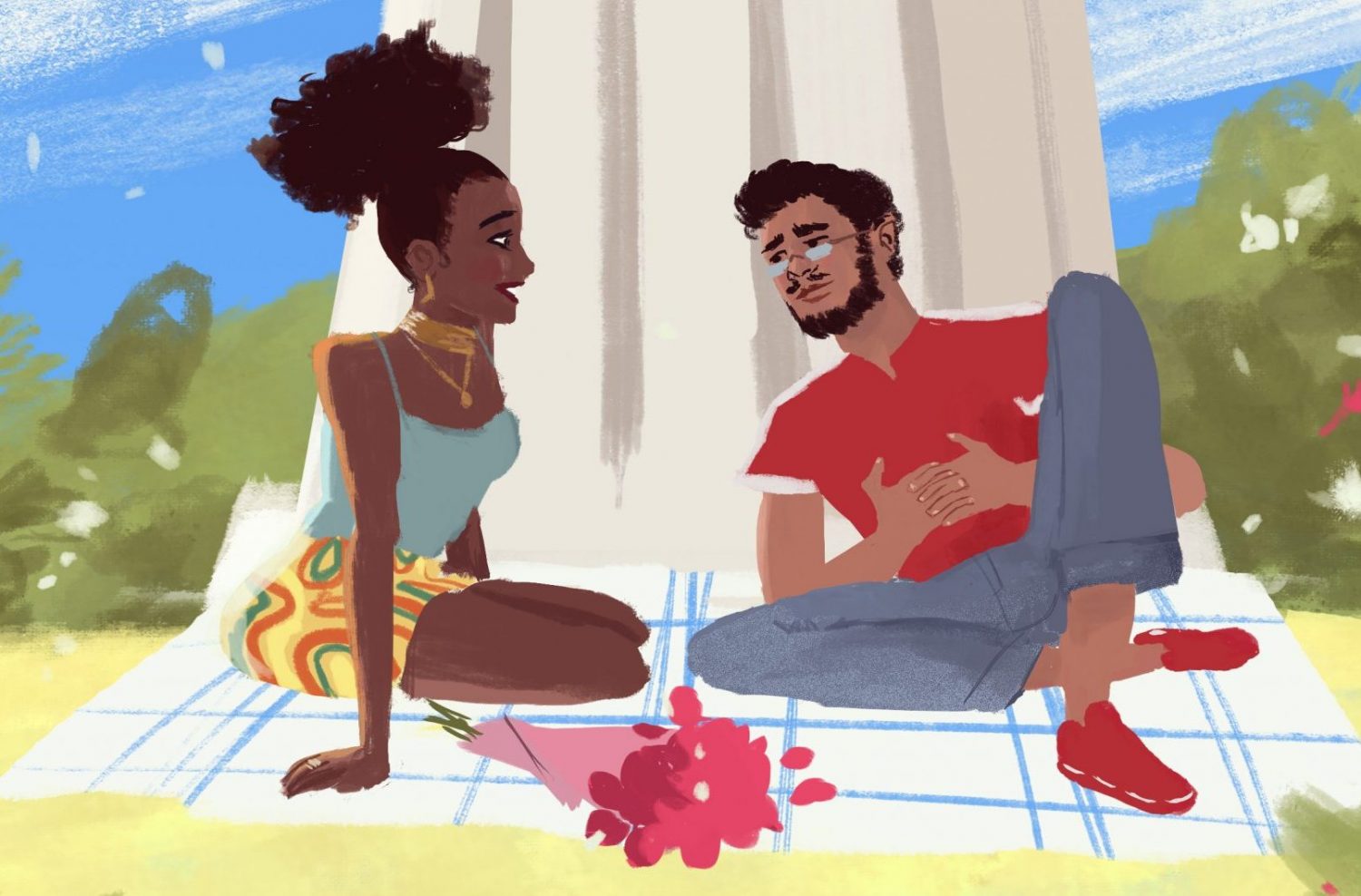 The other day, my partner and I were driving through my neighbourhood, Mount Hope. This little suburb is the link that connects downtown Kitchener to uptown Waterloo; while the streets are lined with well-kept century homes, Mount Hope’s most well known protagonist is the Mount Hope Cemetery on Moore Avenue. A space that welcomes dog-walkers and acts as a home to several squirrels.

“I love my neighbourhood,” I cooed, watching the houses pass from the car window.

“It does have a lot of mature trees and nice architecture,” he replied, a smug smile spreading across his face. This comment was a cute inside joke, a private secret that he and I share.

Several months earlier, when we had our first conversation on Tinder, he asked me where in Kitchener I lived. I told him I was close to the Google building — specific enough to determine our proximity, yet vague enough to protect me from potential axe murderers on a dating app.

Our conversation ran into the next day — once again, it was vague, the type of initial conversation you have on those apps. I asked him what he was doing that afternoon and he said he was going to take his dog for a walk.

“I was thinking of walking her by the Google building,” he wrote.

This comment was obviously suggestive; it was an invite without the directness of an actual invite. I laughed at his shyness, yet admired his direct “indirectness.”

“That’s a nice area,” I responded, ignoring the obvious. “I hear it has a lot of mature trees and nice architecture.”

My “joke” — if that’s what it was — went over well. About an hour later, I met him in the Google parking lot to join him as he walked his dog. Mount Hope became a sort of character in our first date (as did his dog) and it actually challenged my perception of a concrete parking lot. It was in that parking lot that we met, my hands nervously shaking as he watched me walk towards him, unaware of the impact we’d both have on each other.

So if a neighbourhood and a parking lot can contribute to this anecdote that we both hold so close to our hearts, what other stories linger in unsuspecting places in Waterloo Region?

I’ve been following The New York Times’ Modern Love column for some time, and due to the vast volume of submissions, they recently launched Tiny Love Stories — a space for readers to submit their love stories in 100 words or less. Shamelessly, I copied the idea, asking you, residents and visitors of Waterloo Region, to share with the Community Edition your love stories, using Waterloo Region as a backdrop.

The rules were simple: your tiny love story must take place somewhere in Waterloo Region, it cannot be more than 100 words, you can sign off using your real name, or choose to be anonymous, stories told in first person are best and we weren’t going to publish all of them, only the ones that we thought best fit our vision.

Thank you for trusting us with the intimacy and intricacies of your private love stories.

This was the response.

I met you online. It didn’t matter to you that we lived 108.2 miles (you) or 174.1 kilometres (me) away from each other. I wasn’t so convinced, but I agreed to keep chatting until your “Good morning, sunshine” and “Good night, sweet pea” texts became the best part of my every day.

One day you suggested making the two hour drive from Buffalo, New York to Waterloo, Ontario to meet, lunch, no pressure. But I already knew when you showed up at my door all shy with coffee stained jeans that I’d never want you to leave again.

As I sat in Arabella Park, contemplating my next beer order, I asked him what he wanted, expecting the answer to be one of the various drinks on tap. In a moment layered in boldness and vulnerability, he looked up to me over his empty glass and said “Just to kiss you.” I smiled, finished the remainder of my drink and said “I’ve been waiting years for you to say that.”

We were visiting town for the second time. Outside the Princess Cinema in 2004, I cried in his car. The movie had felt too real. It was silent, and my nerves grew.  I focused on the little streams of water trickling down his windshield as the rain grew heavier. He said my name, nervously, stumbled over it like he hadn’t meant to fall and needed my name to steady himself. I love you. I love you too. 14 years have gone by, and we have planted roots here with our daughter. It feels like home the most when it rains.

We first met at the KW Humane Society. As I leaned against the glass I whispered, “You are magnificent.”  I knew this to be true. I didn’t know was that I was staring directly at my new family member who would change our lives. We were beyond lucky to have met you, to have stumbled across you, and even more lucky to be the ones to love you — and for you to love us back. Adopt don’t shop. Adopt senior pets.

I fell in love with a bold ‘n’ brilliant woman while away in university but couldn’t be open about it while here in my hometown.

After a lengthy and complicated experience coming out, I will never forget the first time we were publicly out as a couple in KW. It was at Oktoberfest a few years ago, surrounded by German oompah-pahs and schnitzel, that we danced and held hands. Even though we were leered at when we kissed, I felt brave. We fought for that night — a celebratory night filled with our profound, simple, queer love.

I met one of my best friends in the alley beside the Jane Bond. A mutual friend had put us on each other’s radar, but then one night when I was walking from the Original Princess to the Princess Twin this guy called out to me from the dark. I went over, said hi, and we’ve been friends ever since. We’d go on to publish numerous issues of a zine together, go on trips, and be in each other’s weddings, but it all goes back to that dark little alley.

A good part of my relationships have ended in green spaces. With dog and heart wrapped on leash beside the downtown splash pad. Under Huron trees, sitting on burned summer grass, spilling hurt and fears.

But a better part have started in them as well. Waterloo Park walk, rain race, first kiss. Seized by impulse, a private moonlight countdown that new year’s eve, when we ran into an open field muffled with snow, our teeth chattering over swigs from a bottle of Asti.

You can’t get away from beginnings and ends in Waterloo. Not if you know where to look.

We met at Smile Tiger for our first date, but realized quickly that caffeine wasn’t ideal given the time, and instead, suggested we grab a beer at Abe Erb down the street. That walk over was terribly awkward; conversation was minimal. But as soon as we were seated, we couldn’t stop talking. At the end of the night, I offered to walk her home and she gratefully agreed, suggesting we walk through Victoria Park where we then shared our first kiss. Almost two years now, we have an apartment together in downtown Kitchener, and still frequent those spots.

In a tiny hospital room in Grand River our lives would be forever changed by you, and while we welcomed you and lost you all in the same breath, our love for you is the only thing that keeps us here.

Most nights we take to the streets, driving for hours, wondering what it would be like to have raised you in this city, the city we feel you in everyday.

Love isn’t always butterflies and dusty rose cheeks, sometimes its pure agony, but to have known you for a minute makes it worth it.

Missed opportunities, or was it in my head? That’s the problem with cute strangers: if you don’t speak up, you might never see them again. A few years ago, you worked at Games on Tap. I attended university outside town, yet was there with friends. Cards against Humanity was what we mostly played, two of us not into games. But, it was my birthday. What I said went; had I asked for your number, would you have said yes? Cashing out, you asked if I was from town. I had to say no. But, if you remember — I’m here now.

We both worked at the Gateway Chapters (RIP), and she asked me to see a movie. I wanted to hold her hand, but since I was moving away in a couple weeks, I weirdly just pinched her arm instead. While I was away, we texted and Skyped non-stop, and as soon as I came back we started dating. Less than a year later we were married, and now six years and lots of adventures later, we have a beautiful one-year-old daughter,  a growing collection of books, and just the start of a lifetime of wonderful memories.

I met my girlfriend of almost four years across at a flip-cup table during a Laurier MLSB kegger. She smoked me on the opening draw and gave me a wry smile — I was hooked immediately. Directly after the game, the entire table departed as if it were mysteriously orchestrated. We were suddenly alone and she complimented my Ghostbusters sweater; my pupils began to dilate. A year later at a co-op job in Toronto over coffee with a manager he mentioned he met his wife at an MLSB kegger at Laurier 13 years prior. Just a bunch of lucky Golden Hawks.

Falling in love in Waterloo is great. Falling out of love, not so much. While “our” favourite spaces are still my favourite spaces, they feel a little different now. Taco Tuesday isn’t the same, nor are the delicious sandwiches at Vincenzo’s (ok, they’re still delicious, but they seemed better when shared in your company). The Saturday market isn’t as exciting for one, and neither is a movie at The Princess (although my own popcorn is GREAT), and I can’t imagine Waterloo Park as anything other than “our spot”. I’m trying to fall back in love with my favourite places without you, but it’s hard when we made them “ours.”

To keep reading, check out Chapter Two and Chapter Three.