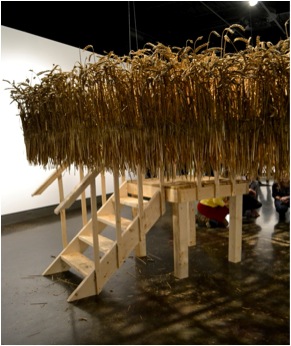 Where one may see a simple wall, an artist may see a canvas. The Nethermind Collective is a group of artists who gather inspiration not just from their experiences but from the environment in which their works are to be featured. Their most recent exhibit is housed at the University of Waterloo Art Gallery as the third stage of the Gallery’s exhibition season.

As you enter the gallery, all separation between gallery and room is forgotten. Each piece not only improves the space it fills but accentuates and is even defined by the environment it’s in.

From the entryway, wires precariously hold a crop of wheat few feet above the floor, framing a grave site further on in the exhibit. In Ascension, the name of the piece, wheat stalks tower over the exhibit. By climbing a set of stairs, viewers are consumed by the wheat field as if lost in the Prairies.

The artist, Mary Catherine Newcomb, had great difficulty resizing Ascension just to fit inside the gallery, and by placing her piece in midair she hoped to depict the hopes and futures of the crop that she tended.

Beneath Ascension, skulls laugh ominously among themselves near the wall. Catherine Heard’s Grave is composed of multiple skulls arranged in a bordered section of the floor. As you walk amongst the skulls, each expression captivates and bewilders. Some smile silently with a toothy grin while others stick their tongues out at their jawless comrades.

Heard experimented with multiple media such as porcelain and wax in order to find materials that could be x-rayed. Each x-ray appears similar to that of a human skull and are displayed over the gravesite.

Over the skulls, a video plays on a screen in a tiny room. Scenes of wind blowing against a plane, a tornado and cop car being beaten by a strong gale wind appear on the screen. It’s interesting to watch such scenes, yet such a simple movie seemed out of place at such an experimental exhibit.

I quickly forgot the movie until a group of miniatures models in a separate room brought back its memory. It soon became apparent that the screen was displaying the live experiences of these models against fan-created winds.

The most surprising model was a cotton ball slowly spinning on a contraption. It was shocking to think someone had conjured such an idea as to create a tornado from a rotating cotton ball but Johnny Dickson’s Stormy Weather had.

One piece was baffling and lulled me back to it. The Torch Series was composed of seven pieces of clay squished by unknown hands. Tom Dean clarified the meaning of his piece. Each lump of clay, he explained, had been modeled by one of the Nethermind Collective artists. Each piece of clay seemed like a torch, hoping to burn long after they’re gone; much like the experimental ideas of the collective.

Three with the Nethermind Collective runs at the University of Waterloo Art Gallery (263 Phillip St) until Mar. 9, 2013.