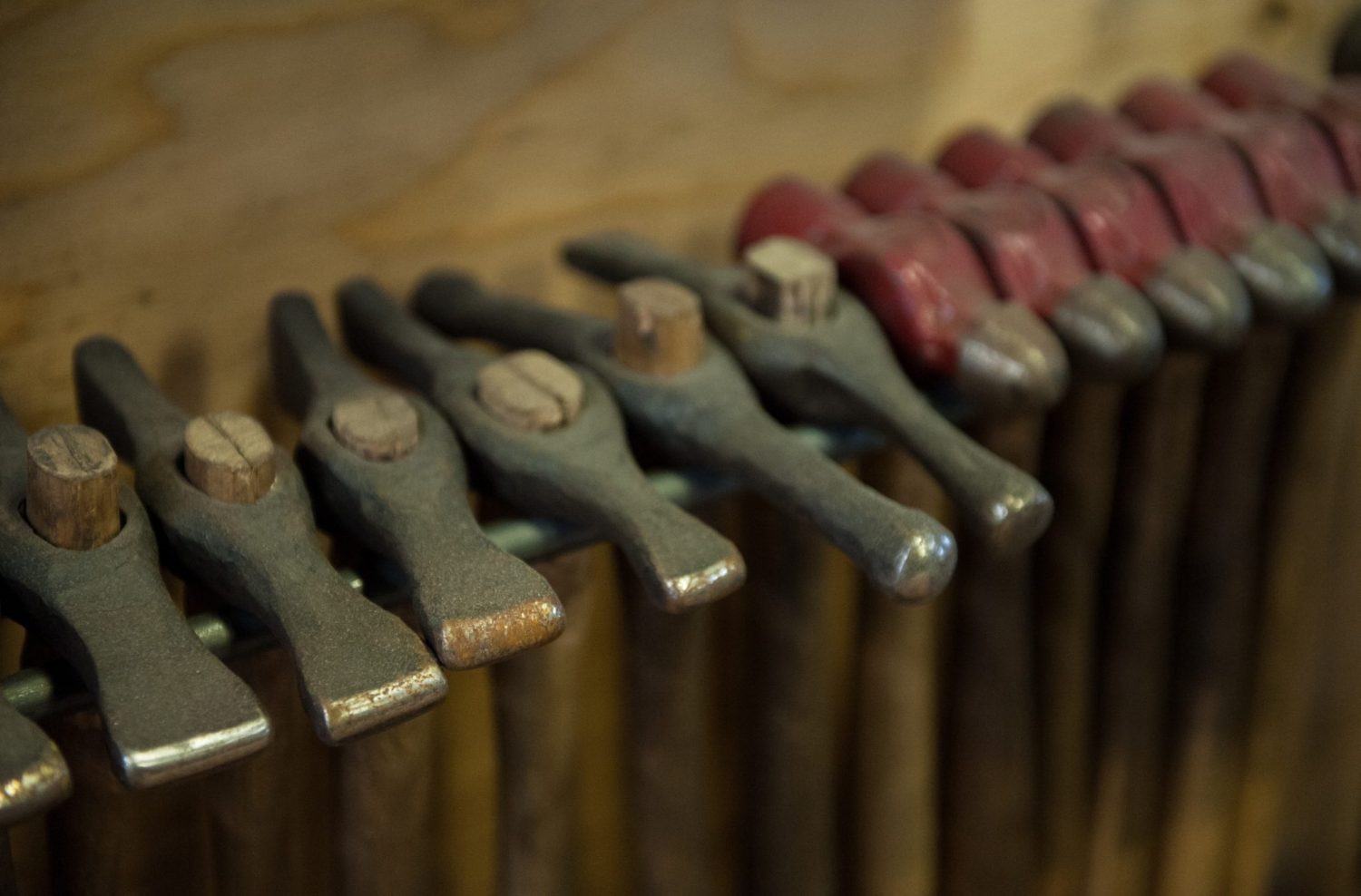 Old medieval hobbies and skills have made a huge comeback in the 21st century. Spaces that teach individuals how to throw an axe or shoot a bow-and-arrow is a nostalgic trend, a reminder of the days when learning something new didn’t involve a digital computer screen. Businesses such as The Backyard Axe Throwing League in Kitchener, have seen a rise in young adults who want to experience the joys of manual labour and to acquire a prominent skill that they can show off on social media.

Two Smiths, a blacksmithing and coppersmith business operated by internationally recognized blacksmith Sandra Dunn, has been in operation for over 17 years in the Kitchener-Waterloo region. The shop has created numerous art pieces and sculptures for clients and community centres, including a monument created for Veterans Week. They have also recently began to host workshops for those young and old who want to master the craft of copper and blacksmithing.

The workshops at Two Smiths is intended for those interested in learning about contemporary blacksmithing and coppersmithing. Two Smiths even has a workshop for kids under 14-years-old, where they can learn the techniques to forge hot steel – a fairly badass skill for an eight-year-old to have. The introduction to blacksmithing workshops, while they have only just begun, are already sold out from January to April.

“It’s introducing them to the basic material properties [and] how the materials work. We look at images of work that’s been done in the past — we have physical examples of pieces,” said Sandra Dunn, owner of Two Smiths and workshop instructor.

“We tried to design the courses so people are leaving with projects, but they’re also really learning the fundamental aspects of working with each type of materials,” Dunn explained.

“Everyone’s character ends up being expressed in the work.”

Before opening Two Smiths, Dunn, a recent grad, had little to no experience with blacksmithing or coppersmithing. With a degree in English and fine arts from the University of Waterloo, Dunn had no interest in the skill until she was 25-years-old, when a friend of hers, working at Artefacts in St. Jacob’s, introduced her to blacksmithing.

One year went by, and Dunn made the jump to work on blacksmithing full-time, learning bit-by-bit and picking up skills and techniques through various blacksmiths across North America.

“I have a problem with not being able to say no. People would say ‘can you do this?’ and I say ‘oh sure I can do that’ and then I would figure out how to do it. That’s kind of how I got involved in it. I’m committed to it,” she said.

In 2000, Dunn formed a business partnership with coppersmith Steven White, who Dunn originally hired to help her file a set of 26 forged hinges. The name Two Smiths, originally called the Ironing Broad, went on to represent the founders of the business – a coppersmith and a blacksmith.

Today, Two Smiths team consists of Sandra Dunn and her team: blacksmiths Bronson Kozdas and Aimie Botelho, with White retiring in 2013. The team’s involvement in a project usually comes from the request of a client, or if they decide to enter a collaborative public art competition.

Last month, Dunn and her team were commissioned to create an interactive sculpture for Veterans Affairs Canada. The sculpture, which features three forged poppies, three bronze disks and lines from the Act of Remembrance, took the team 40 hours to design and forge the sculpture. The sculpture was shipped to Belgium to commemorate the 100th anniversary of the Battle of Passchendaele.

Before Dunn took on this significant project, she had experience in creating large monumental sculptures for public displays. Two years ago, Dunn and over 180 blacksmiths participated in creating a peace monument in Ypres, Belgium.

“One of the most important things about that piece being successful is that it was a group of us, the work that we do in our shop is all collaborative,” Dunn said. “Even though my name is the one that’s usually attached to the business I don’t work alone – I’m always working with other people.”

While Dunn has now been a part of the blacksmith community for approximately 25 years, she said that one of the most difficult aspects of running a blacksmith and coppersmith business is that every project is a prototype.

Building pieces of furniture, for example, varies in scale, size and material. While it may be easier to laser-jet cut metal and welding them together, Dunn and her team prefer to go the traditional route – to heat the metal up and completely change the shape of it.

“The real potential in blacksmithing is you completely change the profile of a piece of metal,” Dunn explained.

“A lot of what we do is functional work so you do something that’s a beautiful design but also functions – a gate, a driveway gate, a railing, a piece of furniture – but, you can also do sculptural pieces.”

While functional artifacts, such as furniture, are common for blacksmiths to create, Dunn considers the craft a form of art. There is the art of blacksmithing itself, and then there’s the art of learning the skill, which for many takes years to master.

“I think [the reason] that blacksmithing can still survive in the 21st century is because pieces that are well designed and because of the potential of it as a form of art, because it’s really labour intensive so there are all kinds of things that people would’ve made before that everyone would’ve had to buy.”

When the common individual thinks of a blacksmith, what stereotypical image comes to mind? It’s most likely big, husky men in the 13th century, hammering hot metal onto a sword for soldiers to go to battle. Something audiences usually see in Game of Thrones or medieval action movies.

It’s no surprise that the craft of blacksmithing has been around since the Iron Age, and in Greek and Roman mythology, the blacksmith Hephaestus, a male, was the god of metalwork, fire and craftsmen who constructed weapons for the gods. In fact, one of the only times audiences may remember a female blacksmith was in the 2001 film, A Knight’s Tale, who was constantly disregarded by the other male blacksmiths and knights.

In the Two Smiths workshop, however, Dunn hopes to create a more female-inclusive environment within the blacksmithing community. Over 12 years ago, when Dunn taught the blacksmithing certificate program at Haliburton School of the Arts, she claimed that half the class of students were females, but those numbers slowly decreased over time.

“My hope is to really make […] people aware that it’s not something that is only a guy thing, that it’s only for big, strong guys, kind of thing. It doesn’t really have to do with that. It has to do more with your ability to be creative and understand the material and be able to manipulate it,” Dunn explained.

Dunn’s hope for more women in blacksmithing came out when she had to create a new advertisement for her blacksmithing course for kids – poster of a young girl in a white dress forging a hunk of metal.

Now, Dunn is thinking of new ways to make her workshops more inclusive for women. She is currently thinking of creating an all-female blacksmith workshop for those who prefer a more feminine learning environment.

“We talked first in the past month beginning of November just to try to say okay, this is something that we can do and to try to create an awareness,” Dunn concluded.

“It’s just about learning the skills and knowledge and having to do it whether you’re male or female or young or old — just have a sense of curiosity and willing to learn.”