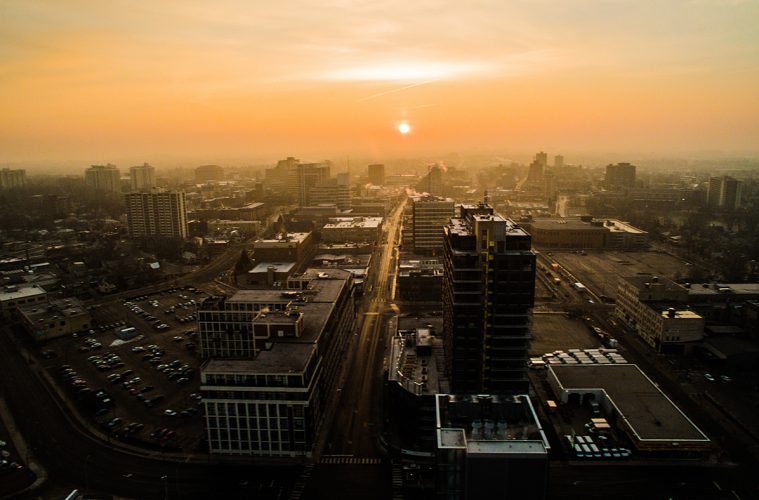 The immigrants were lean and their clothing unsuited to the February chill. In Faizal’s tiny office, the clock ticked loudly as he straightened the papers on his desk, checking the date on the forms: February 6, 2078. He cleared his throat.

‘First thing’s first, if you please. Where was your point of entry into Canada?’

‘We crossed at Windsor, then made straight for Kitchener,’ said the grandmother — or great-grandmother — speaking for the five of them. She was a straight-backed, steely woman with an accent that reminded Faizal of an old film he’d seen once about the First American Civil War. One of her eyes was clear and the other clouded where a thick scar ran down the side of her face.

‘What were your reasons for leaving the Republic of Texas, Ms. — ?

‘Vance. Kate Vance. The drought was bad enough, but last summer we lost everything to wildfire. Heading south or west we’d have found more of the same. Eastward, the Gulf tide keeps rising and the camps keep growing. So we struck out on the long road north.’

Her voice was fearless, but the young parents seated beside her were fidgeting. On their laps the little girl and wide-eyed boy sat stock-still, taking in every word.

‘Thank you, Ms. Vance,’ said Faizal, keeping his tone light. ‘I understand most American migrants are internal to the old federal borders. Why didn’t you choose to re-settle in one of the other Republics?’

‘There weren’t much to choose from, Mr. Al-Yousif. The Midwest isn’t used to independence yet and they’re leery of outsiders. Appalachia’s still in full-out insurgency, no matter what you hear in the news. And New England — well, I don’t have to tell you they hate folks like us.’

Throughout her story, Kate Vance’s face remained stolid, but when she spoke that one word — hate — Faizal caught a flicker of weariness in her expression that made his heart ache.

‘Mr. Al-Yousif,’ the matriarch broke in, ‘we are honest people. We didn’t come to take away jobs from Canadians, we came because we had to. We’re refugees, the real thing. And we’re ready to work. All of us.’

The young mother and father nodded vigourously, and even the two little ones sat up straight and serious.

Faizal smiled. ‘I see we haven’t been very clear with you about our process. Canada no longer has a refugee claimant system — it’s all been folded into general immigration.’

For the first time Kate Vance was speechless. After a moment or two she blinked and said slowly, ‘You mean we don’t have to prove our case?’

‘That’s right. You don’t need to prove anything to me. Things used to be very different, even twenty years ago. During the war, there were huge refugee camps in Windsor and Niagara Falls, a lot of military presence, and a bureaucratic nightmare to top it all off.’

‘But out west, the borders proved impossible to seal up. So many people were just walking across the prairies into Canada that Immigration eventually gave up trying to stop them. And with the war driving up diesel prices, farms that were flexible enough to switch over some tractor work to hand labour found a whole new pool of willing workers. Ottawa took note, and it wasn’t long before what had looked at first like a disaster became official policy.’

‘Farms or factories, Mr. Vance. Waterloo Region is strong in both sectors. We’ve made a point of protecting our community’s ability to provide for itself.’ Faizal tried to keep his manner businesslike despite the excitement and relief breaking out on the faces of the Vance family.

‘You see,’ he went on, ‘immigration isn’t a disaster for countries with functioning economies. When mechanization is kept in check, jobs are less scarce and wages aren’t driven down to starvation levels. More money in workers’ pockets means more money flowing back into the economy of goods and services, rather than draining into the bank accounts of the wealthy.’

There was a glint in Kate Vance’s one good eye. ‘I was a teenager back in ’16,’ she said, ‘when it seemed like things were starting to turn that way for us. We were living in a leaky basement, both my parents working night shift for eight dollars an hour. In a free trade economy like we had back then, the bosses could pay us what they liked, or pick up and move to Indonesia, or China, or wherever. It was called ‘staying competitive.’ Of course, it was always cheaper to hire people with no legal rights, so for us, ‘competition’ meant American-born vs. Mexican-born. A bitter, useless rivalry, born of our shared weakness.’

‘The new administration vowed to change the rules that had broken us, and enforce the rules that could give us some breathing room. Those were exciting times —heady, hopeful times.’

She sighed. ‘But then the president had that heart attack partway into his second term, and the vultures in DC got straight to work gutting what he’d begun. A country can only handle a tug of war like that for so long before … well, I took a piece of shrapnel to the head in ’52, and Junior’s parents stepped on a mine not long after that …’ She swallowed, and the young man placed a gentle hand on his grandmother’s arm.

Straightening up, she looked fiercely at Faizal. ‘That’s behind us now. Everyone’s got a story, and now you know some of ours, Mr. Al-Yousif.’

Faizal nodded slowly. ‘If I could see the village in Syria where my grandparents were born, I expect I’d learn a lot more about my own story. But like you said, that’s behind us. Sometimes you need to look to the future and let the past be what it was.’

Her face was grim, but she nodded slowly as well. ‘You understand us, Mr. Al-Yousif. Well, what’s next?’

‘It’ll take about six weeks for your papers to be processed, but in the meantime you can start applying for work, pending background checks and confirmation of your landed status. Yes, we run a pretty tight ship here at Immigration,’ he said in response to their expressions of astonishment. ‘Can’t have people sitting around on their hands, can we? There’s work to be done.’

He opened a desk drawer and took out a leaflet, which he handed to the younger Mrs. Vance. ‘This is a list of local firms involved in our newcomer worker program. I’ve heard they’re hiring at the Tannery, down at Charles and Victoria. My in-laws made boots there for forty-odd years and they found the pay quite reasonable.’

‘Thank you, Mr. Al-Yousif,’ said the man called Junior. He looked as though he was holding back tears. ‘This is one special place you’ve got here.’

‘Not at all, Mr. Vance,’ said Faizal, rising to shake their hands. ‘Like any place in any time, what counts is what you make of it. But I’m sure I don’t need to tell you that.’