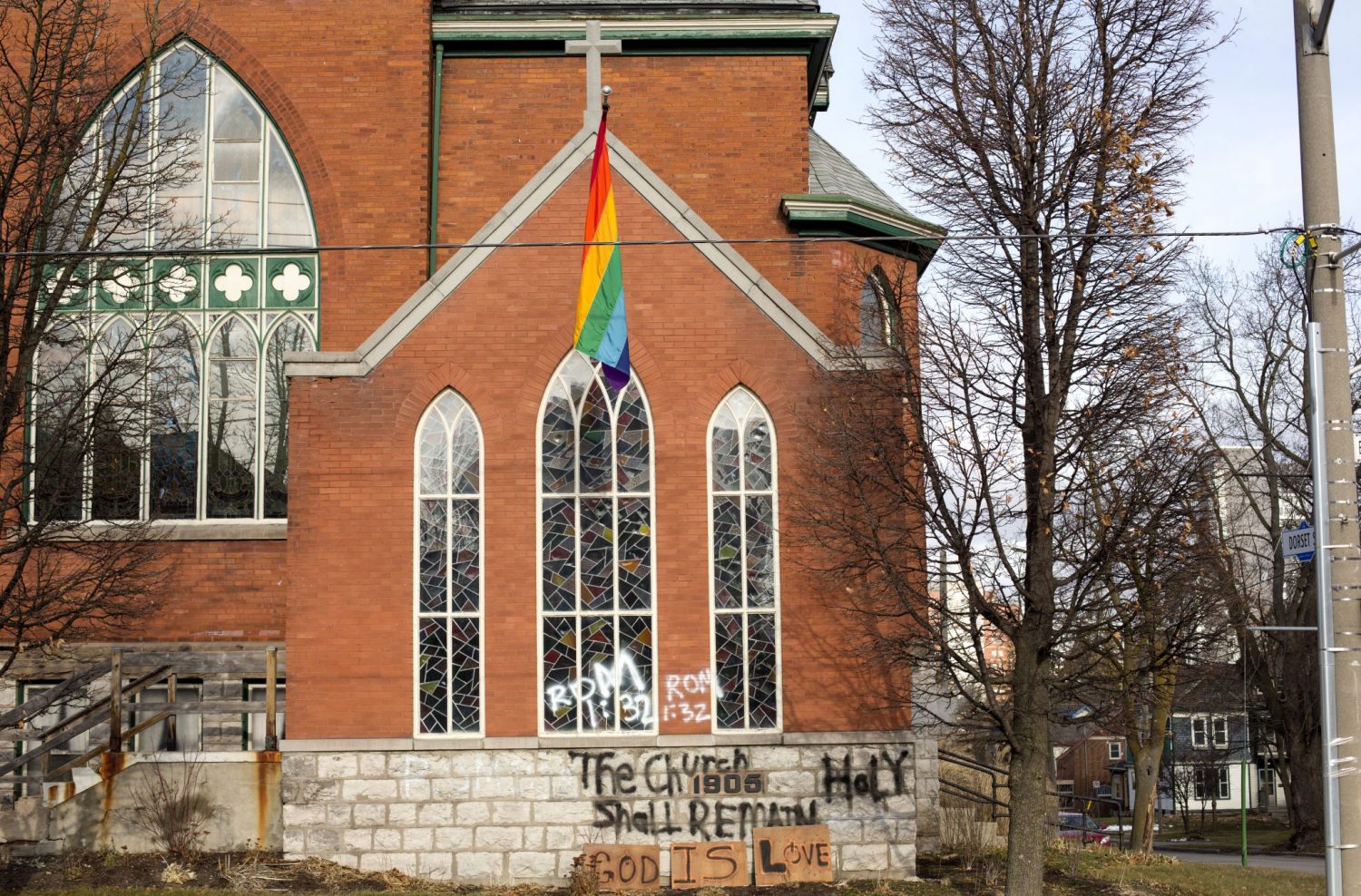 Two weeks into his job as one of the ministers at Parkminster United Church in Waterloo, Rev. Joe Gaspar discovered the verse: “The church shall remain holy” spray-painted on the concrete outside the front doors of the church. This happened on Oct. 18, 2017 and was assumed to be in direct reference to the fact that the church is LGBTQ+ friendly. The weekend subsequent to the graffiti, Parkminster was hosting an LGBTQ+ and allies potluck dinner.

Five weeks later, the church was vandalized with graffiti again, as was Emmanuel United Church in uptown Waterloo. Both acts of graffiti cited Romans 1:32, which reads: “Who knowing the judgment of God, that they which commit such things are worthy of death, not only do the same, but have pleasure in them that do them.” This verse essentially threatens those who act, and those who support those who act, outside of God’s judgement. The graffiti at Emmanuel United was directly under the pride flag that they fly outside the church.

But you’ve heard both of these stories already. This isn’t, by any means, new news.

These stories were closely reported on by multiple media outlets in the Region and while the vandalism was undoubtedly wrong, the missing link is the opportunity to learn more about churches in the Region that are actively working to present themselves as a safe space for the LGBTQ+ community.

“Inclusion is a hallmark of holiness. For me, in the church, we talk about how do you discern the presence of the spirit? One of the ways that I discern that is by inclusion,” Gaspar said, when asked about how Parkminster United approaches inclusion.

“We’re not a club of believers. We’re much more than that. We’re a community of people who are following the leading of God and faith. If we’re doing that, we should expect to be surprised. Because God often leads us in ways that we would not expect and is opening up new frontiers to us, and one of those frontiers, I think in the last century, has been the plight of LGBTQ+ people.”

Parkminster United has a group called the Inclusive Ministries Committee, a committee devoted to taking a long, hard look at how the congregation approaches inclusivity, and how they affirm those in the congregation or in the community who may be marginalized or oppressed. It was this group that lead to the raising of the pride flag. Parkminster also holds LGBTQ+ friendly potluck dinners a couple times a year in addition to acting as the space for the AIDS Committee of Cambridge, KW and Area (ACCKWA) to hold their annual AIDS vigil.

Allen Switzer has been a member of Parkminster United for 15 years, in addition to being the church’s custodian. Switzer sits on the Inclusive Ministries Committee, speaks at other churches about same sex marriage and is also a member of the LGBTQ+ community. He explained that Parkminster went through an affirming process, which is when the congregation takes a look at how they include LGBTQ+ people within their congregation. This is set out by Affirm United, which is parallel to the United Church.

“So this was a process that took place over approximately 18 months. And then the whole congregation votes on that. What they’re basically saying is that we accept LGBTQ+ people within our congregation. You are all welcome,” Switzer said.  “But, it’s a wider perspective, really because what it is, is all minorities, we include all of you … anyone who feels that they’ve been marginalized in some kind of way.”

Switzer explained that this process wasn’t as easy as some may have assumed it to be.

“Initially, when the process started, everyone thought this church is going to be extremely welcoming, the vote will pass with 90 per cent and it’s going to be wonderful. Well, as the process was going forward, this is where the cracks started being exposed. In other words, there were groups of people [who were not accepting],” he said.

The vote passed however, despite the cracks being exposed. They did lose some members of the congregation, but they also gained the reputation for being an inclusive space. But saying that you’re a church that accepts marginalized groups isn’t just as easy as flying a pride flag. They had to put their verbal commitment into action.

Affirming and welcoming are two different things. Reverend Jenn Hind of Emmanuel United explained that to be welcoming is to have open doors, whereas to be affirming is to accept someone for exactly who they are.

“What ends up happening, is that it comes off, I think, as: we love you and we accept you because Jesus tells us to. But we don’t agree with your “lifestyle”— and I say that in quotes because I don’t like the word “lifestyle,” but that seems like society, once again, has the misconception that it’s a lifestyle, and it’s not,” Hind said.

“That message is not good enough for the church of the 21st century; it hasn’t been good enough for a long time, it’s not good enough. So what Affirm United, which is an organization within the United Church of Canada, has done is put together a process of learning that engages people in challenging themselves to look at the text deeper and to challenge how they’re living out their faith. And through that process, one comes to understand what it means to be affirming: which is to say that: “we all make mistakes, nobody’s perfect, I’m not perfect …” but I do not consider, ever, at any time, that one’s sexual expression, gender expression, sexual orientation or gender diversity, that is never the sin.”

Hind explained that there needs to be a little extra care put forward to those who are experiencing oppression. “To say we welcome you and we love you is one thing, but it’s not enough for somebody who’s been oppressed by the church,” she said.

Hind is also a member of the LGBTQ+ community, which has played an active role in how she addresses her congregation. She didn’t grow up in the church; the church actually didn’t play a huge part in her life until she came out.

“After having a really long dark period of drug and alcohol abuse, which I’m also very open about, it wasn’t until after I started getting clean and I started going back to church as a way to rebuild a relationship with my mom, that the gospel started coming alive and I felt this vibration of love and acceptance that I had never experienced before,” she said.

The pattern here is clear: the United churches in our community are approaching inclusivity in a way that maybe complicates the traditional Christian approach to those of sexual diversities. Assumedly, that is why they were targets for vandalism.

Both Hind and Gaspar explained similar views to how we should interpret the Bible. Hind explained that “cherry picking” verses can have problematic outcomes.

This comes into play when addressing the vandalism. Using a specific verse out of context, such as applying Romans 1:32 to the affirmation of the LGBTQ+ community is “cherry picking” verses. It’s using one line as some sort of blind truth.

Gaspar explained that when studying the Bible, it’s important to place it within its historical context, meaning that maybe that verse could have been applicable thousands of years ago — in a time where procreation was essential. Sex outside of heteronormativity didn’t have a purpose.

“It’s a time bound document, that was written in a very specific context — social, political, economic context — and also time bound in the sense of the actual knowledge that people had of the world. When you look at scripture that way, you have a lot more freedom to interpret it differently and you can look at it with all its limitations and still look for the presence of God in it with all its limitations,” he said.

For some people, this causes tension. It’s essentially asking Christian people to ask questions, to challenge their own belief and to look critically at how they interpret God’s word.

“If somebody’s asked to go outside of what it is that they believe, then there’s going to be a tension there. There’s that cognitive dissonance as we live in the tension of what we thought we knew and what we’re being presented with,” Hind said.

In 2009, Waterloo Region was ranked the hate capital of Canada, as we had the highest number of police reported hate crimes in the country. In 2010, we were in third place. That was only eight years ago. Maybe in the past we haven’t considered that a church could act as a safe space for members of the LGBTQ+ community, but in a community that surely still has a lot of work to do, it’s refreshing to know that there are groups that are challenging the traditional relationship between religion and the LGBTQ+ community.

“I’m not going to deny that Christianity as a whole has done a lot of damage and has a lot to apologize for. And I’ll be the first one to admit that. Christianity as a religion and as an institution has hurt a lot of people,” Hind said.

As for the graffiti, Hind isn’t afraid of being targeted again.

“We’re just going to keep on raising the flag,” she said.