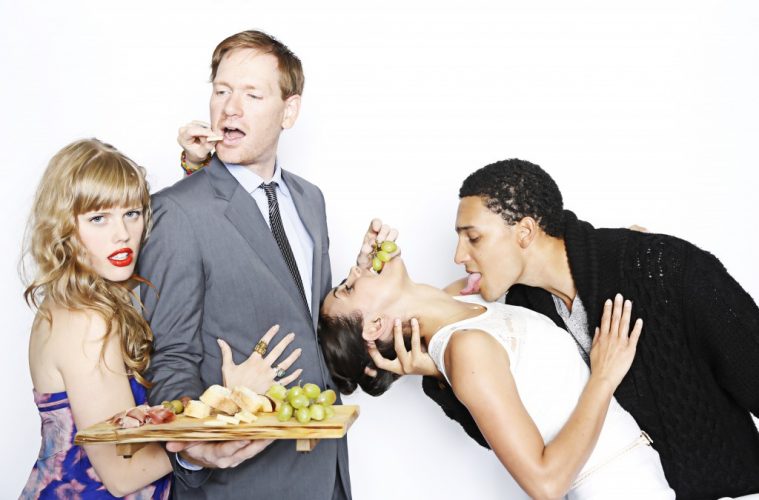 A Toronto based theatre company with roots in Kitchener-Waterloo are hoping to bring their racy new play to the area this fall and they’re relying on crowd funding to do it.

Theatre Brouhaha has put on several well received plays in Toronto and the surround- ing area. Delicacy is the latest entry to the company’s oeuvre. It’s a risque black comedy about two couples who meet at an underground sex club and later reconnect for a din- ner none of them will ever forget.

Chris DePaul, Theatre Brouhaha’s producer, has been eager to bring another play to Kitchener since the company brought their play Help Yourself here in January of this year. But he was concerned they wouldn’t be able to sell enough tickets to make the trip worth- while. Enter crowdfunding.

“We had a [Toronto] Fringe show last week and it sold out,” he explained. “We got asked a lot of questions about whether there would be an encore.” Rather than book a theatre and hope for ticket sales, DePaul used a Toronto based crowd funding tool called CSI Catalyst, created by the Centre for Social Innovation.

Artists have found that crowdfunding has allowed them to pursue their passion without taking such a hard hit on their wallets. This has certainly been the case for Theatre Brouhaha, many of whom still have day jobs. “It’s a really effective way to ensure that everyone involved in the show is able to constantly take time off work to come out and do a performance,” DePaul noted.

Now DePaul is hoping that K-W audiences will be as generous. He’s put a hold on space at the Registry Theatre in Kitchener for Sep- tember 13. “I would want to know at least half the house would be sold,” he said.

While the company does have some personal ties to K-W, it’s the audiences that make them want to come back. Help Yourself was received enthusiastically when it was performed here in January, and just this past June DePaul, playwright Kat Sandler and dra- maturge Tom McGee wrote a crowd sourced play as part of Steel Rail Sessions 2013.

“I think what’s becoming apparent is K-W is becoming Brouhaha’s home away from home,” said DePaul. “The audience there is like us — interested in the same type of issues — and looking for theater that is edgy, witty and addressing issues that are a part of their lives.”

Humour is a constant in Theatre Brou- haha’s plays, and Delicacy is no exception. It’s gotten rave reviews from NOW magazine in Toronto, and Jorn Weisbrodt, the artistic di- rector of Luminato described it as drug like – “you just want more as you go along.”

“Like all our plays humour is the main fo- cal point,” said DePaul, “but [Delicacy] goes dark, definitely dark.” He and the rest of the theatre company often describe themselves as writing for the HBO generation; darkly comic pieces that aren’t afraid to take sex and violence head on (no word if they’ll be including any dragons yet though).

If Theatre Brouhaha is able to raise funds, K-W will get to experience the treat that is Delicacy. For DePaul, his expectations are simple.

“We’re really hoping we’re able to come with Delicacy, perform in front of this audience and go our for drinks after,” he laughed. After all, what more could you want?

To learn more about Theatre Brouhaha or sup- port their crowd funded campaign to bring Delicacy to Kitchener September 13, visit theatrebrouhaha.com or their CSI Catalyst campaign.