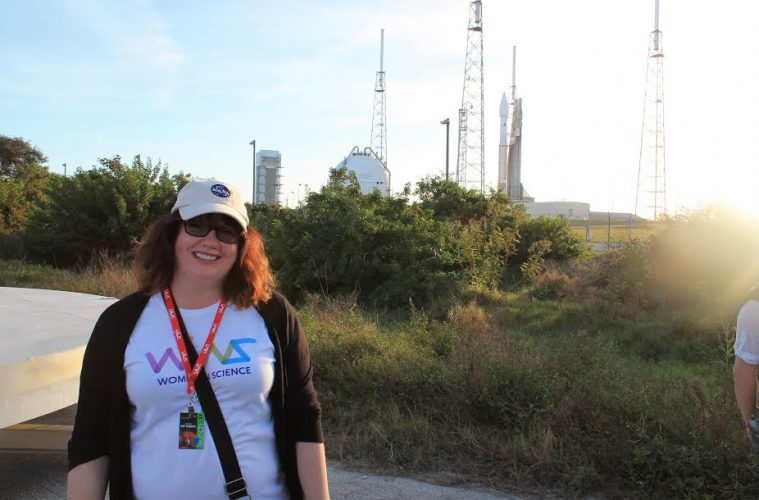 From nerd nite to NASA

Charlotte Armstrong didn’t get tickets to see Canadian astronaut Chris Hadfield speak at the University of Waterloo this December. But don’t feel bad for the Nerd Nite Kitchener organizer — she missed buying tickets because she was at Kennedy Space Center in Florida, watching a rocket launch into space.

“Most of the places are radio silenced,” she explained, laughing. “I couldn’t even tweet before the launch, it was totally dead.”
Disruptions to cell phone signals aside, going to NASA was an incredible experience for Armstrong, who describes herself on her own Twitter account as a “science fiction su- per nerd.”

“You can see a launch any time in videos,” she told the CCE from Florida earlier this month. “But you can’t feel the launch like you can when you are there in person. You hear the engines and then the sound comes and the whole earth rumbles like an earthquake.”

Armstrong, who works in science commu- nications, got the opportunity to visit NASA as a special guest through her volunteer work with the Planetary Society, a non-profit or- ganization that promotes space exploration, where she is a regional coordinator. It’s just one of the ways that she’s found an outlet for her interest in astronomy, which developed at an early age.

“I was doing outreach in grade one,” she said. “I was always asking the teachers if they needed help with their scientific teaching.”
While she’s interested in almost all aspects of science, space holds a special fascination for her. “Everything about space is amazing,” she said.

“When you look up at the stars or you see the International Space Station fly by it gives you this sense of wonder that I just don’t find in any other science.”

Armstrong continues to do outreach to- day, through her Nerd Nite events where lo- cal community members get to do presenta- tions on their favourite nerdy subject – past presentations have included real life ghost- busters as well as people involved in space science – and through a variety of other events like Ada Lovelace Day, which cele- brates the contributions of women in science and technology.

She believes getting the opportunity to go to the Kennedy Space Centre is entirely due to being an active volunteer. “When I became a regional coordinator at the Planetary Society it was really a process of me asking and taking the initiative.”

Her dedication to volunteerism has led not only to the opportunity to visit NASA, but also to get to know some of the best and brightest in the scientific community. For instance, Dr. Shohini Ghose, a theoretical physicist and the director of the Centre for Women in Science at Wilfrid Laurier University, who was recently selected as a TED 2014 fellow, accompanied Armstrong on her trip at Armstrong’s invitation.

The pair, along with their partners, got to rub elbows with NASA scientists and a spe- cial guest — Bill Nye the Science Guy.
Some might find it intimidating to mix with so many incredibly intelligent people. But Armstrong found that it was a unique opportunity to learn and see some of her he- roes in a different light. She toured the NASA facility with Nye, who asked as many ques- tions and was as wowed by the sights — in- cluding space shuttle Atlantis — as she was.

Having now seen a rocket go to space, would Armstrong want to take the next step and go up herself?

“I would 100 per cent go to the moon,” she said, though she might pass on the trip to Mars – at least until there’s a way to get back.

To learn more about the Planetary Society, visit planetary.org. You can connect with Armstrong on Twitter – @scifichar – and check out Nerd Nite Kitchener-Waterloo on Facebook.