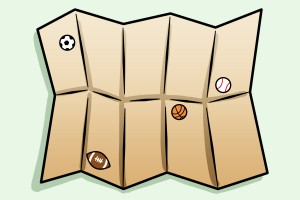 The Region of Waterloo is beginning to take notice

The Waterloo Regional Tourism Marketing Corporation has shifted their focus to the lucrative business of sport tourism, aiming to improve local sporting facilities and volunteer bases, and to attract more tourists to the area.

“We want to capitalize on what already exists,” said Minto Schneider, the general manager of the Waterloo Regional Tourism Marketing Corporation. “Kitchener-Waterloo has been tremendously active in this region [and] we think there is potential here.”
“Potential” might be an understatement.

In 2009, the province divided up the provincial boundaries into 13 tourism regions, called regional tourism organizations (RTOs).

Waterloo Region falls under RTO region four alongside Huron, Perth and Wellington.
“We’re working in partnership with them to transport tourism,” Schneider said. “Consultants came back to us with results in the study that there was potential.”
Schneider emphasized that “real opportunity lies in sports tourism.”

The plan is to mimic neighbouring cities that have already established themselves in the sports tourism world, such as London, Toronto and Hamilton. These locations are considered successful in this industry namely because they have elite facilities and professional sport teams.

However, this is not the primary vision for Schneider and her team, as they want to focus more on expanding the tourism for provincial and minor sporting events.
“There’s hockey, volleyball, football, figure skating, we’ve even got roller derby — we’re hosting an event in August,” Schneider said. “We’re also hosting the Canadian championships for ultimate Frisbee.”

The Ontario Volleyball Association is also hosting their provincials in Waterloo for their seventh year in a row. They have a record registration of 600 teams coming to town this year.

But in terms of what a boost in sports tourism will do for the community, Schneider explained that it will be good for local organizations and leagues.

“If we can let those leagues know that we’re here to help, we can organize all the things involved with the tournament,” she said. “We might be able to get their colleagues to come.”

However, there will be some difficulties.

However, she explained that the sports tourism initiative has already begun to pay off.

Since their shift in focus started in September, Schneider estimates that their impact is more than $3 million to the community over the next two years.

“One big thing about bringing tourism is that it is easy to count,” she said. “When you attract business for sports tourism, it’s a lot easier to tell if you’ve been successful.”

But to Schneider, her group isn’t bringing forward something entirely new to the region.

“We’re really building on success that already exists in the Region,” she said.