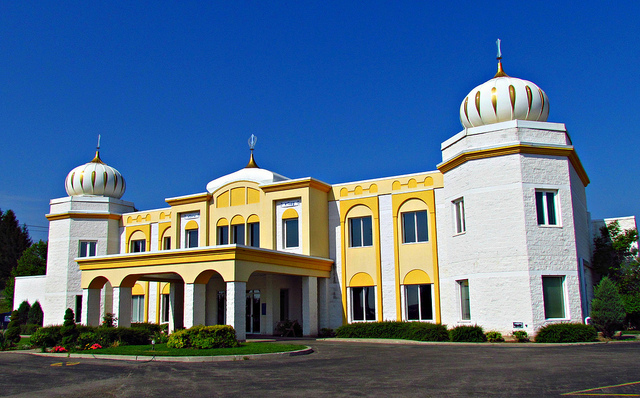 Seeker’s Corner at the Guru’s Door

The Golden Triangle Sikh Association’s (GTSA) Gurdwara Sahib Kitchener-Waterloo is impossible to miss on Snyder’s Road, just west of Highland and Ira Needles. It is entirely possible, however, not to recognize the parking gate’s silver triple sword as the Khanda emblem of Sikhism, or the white Gurdwara’s soaring triple spire as the principal site of worship for Waterloo Region’s approximately 3,000 Sikhs. And it is downright probable that most passers by do not recognize GTSA as the highest contributor to the food bank of all Waterloo Region’s religious communities.

In early March I attended a Sunday morning worship service at GTSA with a small group of university students. We were welcomed by a soft-spoken elder, Chattar Ahuja, who paused his kitchen work to patiently answer our questions and explain temple protocol. After doffing our jackets and shoes in the biggest coatroom I’ve ever seen, and covering our heads with supplied scarves and kerchiefs, we entered the Gurdwara’s main prayer hall. Gurdwara is a Punjabi term meaning Guru’s door, and the identity of this community’s Guru became very clear upon entering the main hall.

The foremost Sikh scripture, the Guru Granth Sahib, sat enthroned under rich brocade at the end of a long centre aisle dividing the plainly decorated hall into gendered seating areas. I folded my hands and bowed before finding a spot on the floor to the right with at least a hundred other men.

Assembled Sikhs encountered scripture as much through devotional song (kirtan) and through the Guru Granth Sahib’s commanding physical presence as the room rendered sacred script into sacred sound. To the right of the text’s throne sat three kirtan leaders with harmonium, tabla and microphone. Their hymns undulated hypnotically between quiet spoken word over soft harmonium drone and rousing call and response over sharp bursts of tabla. Line by line each hymn was projected on the wall behind the musicians in both Punjabi and English:

“By Guru’s grace, such understanding is infused into me. My comings and goings in reincarnation have ended.”

“O Lord, merciful to the meek, I have placed my faith in you. Along with all my family, I have come aboard your boat.”

In an attempt to describe the intensely personal nature of encountering God through the singing of devotional hymns, our guide Chattar quoted the first Sikh Guru, Guru Nanak: “If the sea was ink, and I had all the world’s bamboo to write with, I still could not write enough about you, O God.”

“When you pray to God, you get a feeling that is a peace in the heart, that no one else will understand,” Chatter explained.

Individuals and families came and went from main hall worship, joining and withdrawing from kirtan seamlessly and without prescription. After about 30 minutes in cross-legged observation, our group retired to the basement for langar, a traditional communal meal in which Sikhs and non-Sikhs of all social stripes are invited to share food.

In the langar hall, people mingled in seated rows facing each other while men distributed the meal’s components one by one from steel buckets into our identical steel dishes: rice, dahl, beans, roti, yoghurt and a sweet orange rice. At the head of the hall a large tea urn warmed delicious milky chai. After langar we were treated to prashad, a blessed and delicious sweet brown paste received on bended knee and eaten from one’s palm.

I could not help but connect my experience of GTSA’s open door kirtan and langar — music and meal — with Chattar’s account of Sikh inclusivism. Raised among Hindus and Muslims in the Western Punjab, at age 30 Guru Nanak famously declared: “There is no Hindu; there is no Muslim.”

For Chattar, this meant: “There is no conversion mission from us. Anyone who believes in the one God the Father and lives well is a Sikh.”

Emory-Moore is a PhD student in religious studies. Through Seeker’s Corner he shares his lived experience interacting with the many faiths of Waterloo Region. TCE recognizes that faith and religion are complex, and that a series can’t fully capture the depth or diversity of a belief system. We’d love for you to add to the discussion: info@communityedition.ca.