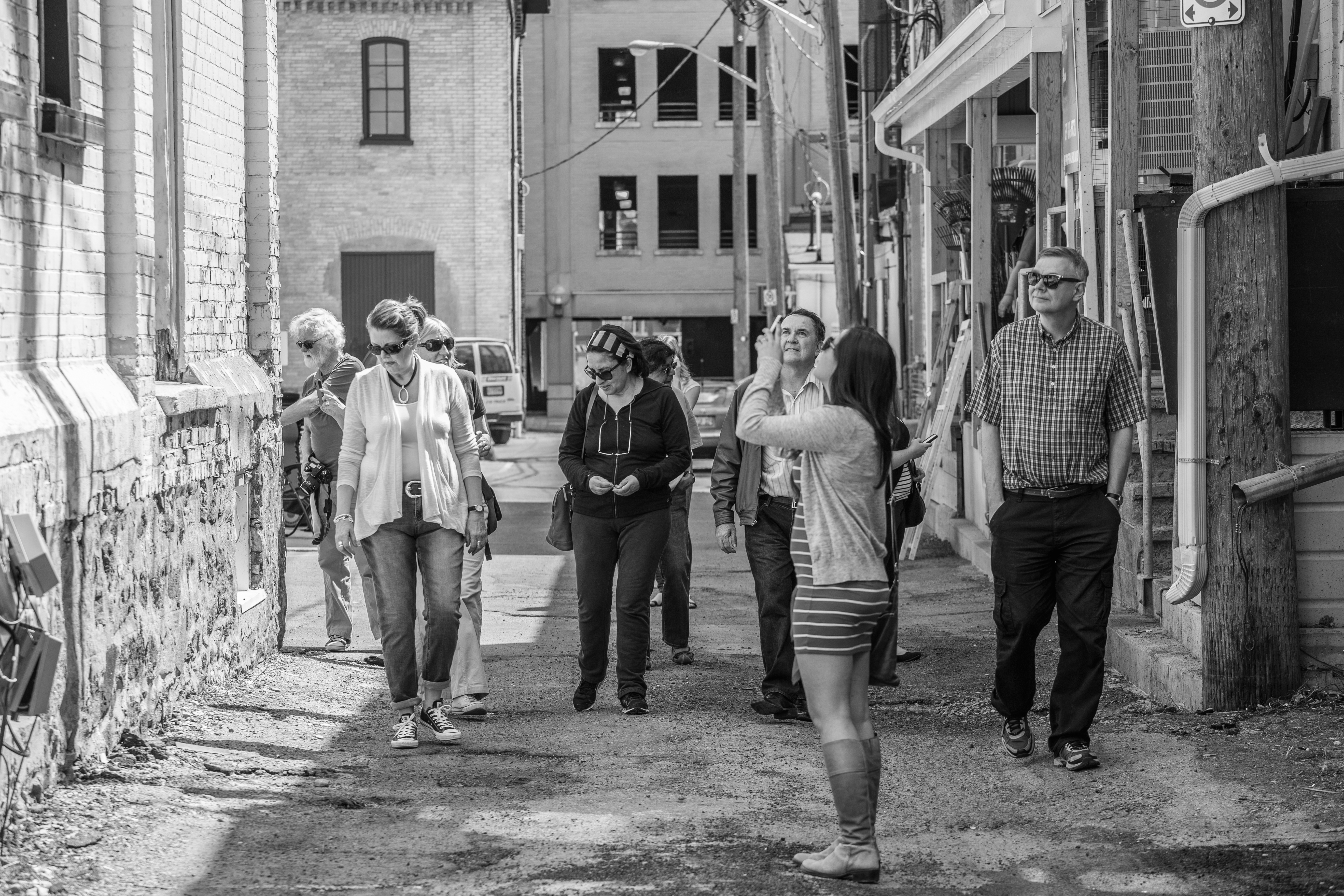 Jane’s Walks are free, locally organized, citizen-led walking tours that encourage people to observe, reflect on and re-imagine the places in which they live, work and play.

Jane’s Walks take place in more than 100 cities world-wide. The first walk was organized in 2007 to honour the legacy of Jane Jacobs, an urbanist and activist who advocated for a community-based approach to city building. Jacobs was instrumental in stopping the expansion of highways in New York City and Toronto.

In her 1961 book The Death and Life of Great American Cities Jacobs reacted to the urban revitalization movement of the 1950s that gave rise to the demolition of historic city centres to make way for new infrastructure. Jacobs opposed this form of urban planning and became an advocate for cities. For Jacobs, successful city planning and design featured mixed use space, older buildings, smaller blocks and higher population density.

Jane’s Walks are not traditional walking tours. They are about storytelling, conversation and community. Some of this year’s walks in the region are titled “Secrets of Amos Weber,” “Rock around Kitchener (with Peter Russell),” a “Fairy Walk on Brubacher Street” and “Growing Up in West Galt.”

Tricia Siemens, former co-owner of Words Worth Books, is leading her walk “Waterloo’s First Neighbourhood” for the third time this year. When asked how she became involved with Jane’s Walk, Siemens cites Jacobs’ influence on her life.

“Jacobs’ ideas have shaped the kind of person I have become,” says Siemens.

“The impact of her vision can be seen worldwide, not just in my little corner of Waterloo, but in countless other cities around the world.”

On a cold and rainy Saturday in 2014, 45 people attended Siemens’ walk. Last year the number jumped to 67 attendees.

“People are keenly interested in finding out about their community.”

Speaking about the food forest, McKlusky said that “the city buy-in has been great, they’ve been super supportive but we want to get people out and see what we’re doing. This is just the beginning.”

Starting at the Forest Heights Community Centre the walk culminates with attendees planting a pollinator fedge – don’t worry, that’s not a typo. A fedge is a hedge that produces food for native pollinating insects.

A Jane’s Walk is intended to be a conversation about your community, not a lecture. Whether you’re a walk leader or an attendee, you are being brought together by your shared passion for your community, and the idea that you never truly know your community until you get your feet on the street and start walking. Jane’s Walks celebrate walkable communities and champion the idea that one’s sense of community and belonging is strengthened by walking. Walking through your neighbourhood gives you a different perspective. You get to know your neighbours, their habits and rituals. You start to share little pieces of your life with your neighbours, like the woman and her dog ‘Banjo’ that I greet every morning on my way to work.

The Region of Waterloo determines walkability scores based on residential density, the number of intersections, variety of places to visit, and the design of retail stores. While neighbourhoods like uptown Waterloo, downtown Kitchener and Galt are the most walkable, no matter where you live you can enjoy the benefits of walking. Whether you start walking your kids to school, go for a walk after dinner or take a new route with your dog, there’s plenty to explore in every community.