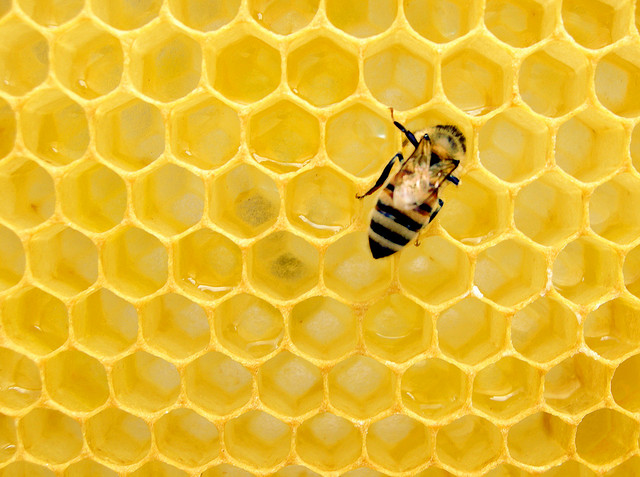 Building resilience: On the politics of pollination

Janine Benyus, renowned natural sciences writer, said that “in the natural world, life builds from the bottom up, and it builds in resilience and multiple uses.”

Surveying the dead or damaged limbs, splayed bushes, and generally bleak look of everything in my garden these days is an exercise in hope. Winter is a great test of resilience, for nature and society.

How can we build a resilient life? Understanding our fundamental need for community, food, water, air and how it interacts with the complex, technological urban life we have created and generally enjoy, will help. Building resilience is neither convenient, nor cheap, but it far outweighs the costs of not being prepared for the inevitable unknowns.

“Building resilience,” the Community Edition’s newest column, will navigate both local and global issues to consider how Waterloo Region citizens can learn from experience.

At the St. Jacobs Market, the honeyseller cannot be missed. His corny sales pitches are a near guarantee; “how about some honey for your honey?” or “life is sweeter with honey!” But the bees behind this vendor’s business aren’t as guaranteed as they once were.

Agricultural and chemical advances often come with unintended consequences. In an effort to fight harmful insect infestation, honeybees are taking a hit, too.

Bees, irreplaceable pollinators, are increasingly exposed to neonicotinoid-treated seeds, causing mass-dying of colonies in the spring. This has been documented in Italy, Germany, Austria, Slovenia, the USA and Canada. While bees are not necessary for growing grains, corn and legumes, they pollinate 84 per cent of commercial fruit, vegetable and nut crops. Nature’s efficient and effective pollination system is at risk, and calling for resilience.

Neonictinoids, created in the late 1990s, are systemic pesticides, 20 times more effective than DDT. Technologically advanced — they are not just used on plant leaves, they are taken up by the plant and transported to all the tissues (leaves, flowers, roots, stems, pollen and nectar). The decade old pesticide gained such popularity that, in 2008, “neonics” made up 80 per cent of all seed treatment sales worldwide. Evidence for bee colony collapse soon followed. By 2011, global sales for neonic treatment was over US $2.63 billion, solidifying their place in modern agricultural practice.

“If we lost our pollinators, it doesn’t matter if you live in the city or the countryside, we need to work together to find ways to protect both the wild and native pollinators, and our honeybees,” says Susan Koswan, founder of the Grand River Environmental Network (GREN).

Balancing economy with sustainability is no easy task. Powerful interests too often dominate the discussion, leaving a passive citizenship with hopes that government will make decisions with “the good” in mind.

But some individuals in Waterloo Region won’t wait for this imminent collapse of bee colonies.

Local groups concerned with WR’s bounty of bees have partnered with the Sierra Club of Canada to protect the pollinators.

“Pollinators such as bees, butterflies or any other insects, are such an important part of our ecosystem, and especially important for the production of our food and the food of many other living organisms,” says Anne Morgan, biologist at Waterloo Region Nature (WRN) and Protect the Pollinators event organizer.

Farmers’ market phrases promising a “honey of a deal” are common place to any regular, bringing out smiles and wallets. But it also raises issue worth discussion in Waterloo Region, and an industry in need of great resilience. When it comes to building a resilient food supply system, ignorance is not bliss. Protect the Pollinators, a discussion on neonic effect on bees, will be held at Princess Twin Cinema on April 7 at 6:30pm.