On Making Art that Makes Itself

The ambiguity of nets, curtains, veils, drapes—means of concealing that can also reveal—permeates the large-scale works by Barbara Hobot currently on exhibit at the Kitchener-Waterloo Art Gallery (KWAG). On the wall hangs a piece of faux leather vinyl cut and flared like a skirt; on the adjacent floor lies its aesthetic relative, partly draped over a wooden dowel. The two untitled pieces are part of Our Mutual Friend, an exhibition of new work by five locally based artists. The new pieces have been created in response to and are shown alongside objects from KWAG’s permanent collection as the gallery celebrates its 60th anniversary.

“I’m interested in [the] potential energy of objects,” Hobot tells me as we chat in the KWAG lobby outside the exhibition. Indeed, a central question that propels her studio practice, as she’s written in the artist statement accompanying her work, is, “Can an artwork make itself?”

“I’m determined to reach beyond my own intentions, as seemingly preposterous as that may sound,” the statement continues. “Searching for a creative sentience within objects compels me to keep making.”

As we talk about this somewhat paradoxical approach, I’m struck by her openness to sharing her thinking and her willingness to entertain my interpretations of her work. Our conversation flows around her fascination with archetypal tools that “do a hell of a lot,” like nets, knives, and wedges; how grad school helped her let go of some self-imposed rules in her practice; and the desire to limit her own subjectivity, which has led to processes such as using previously made artworks to make new pieces. A broad overview of her work suggests a  sort of developing family tree, with genetic or evolutionary relationships across mediums. 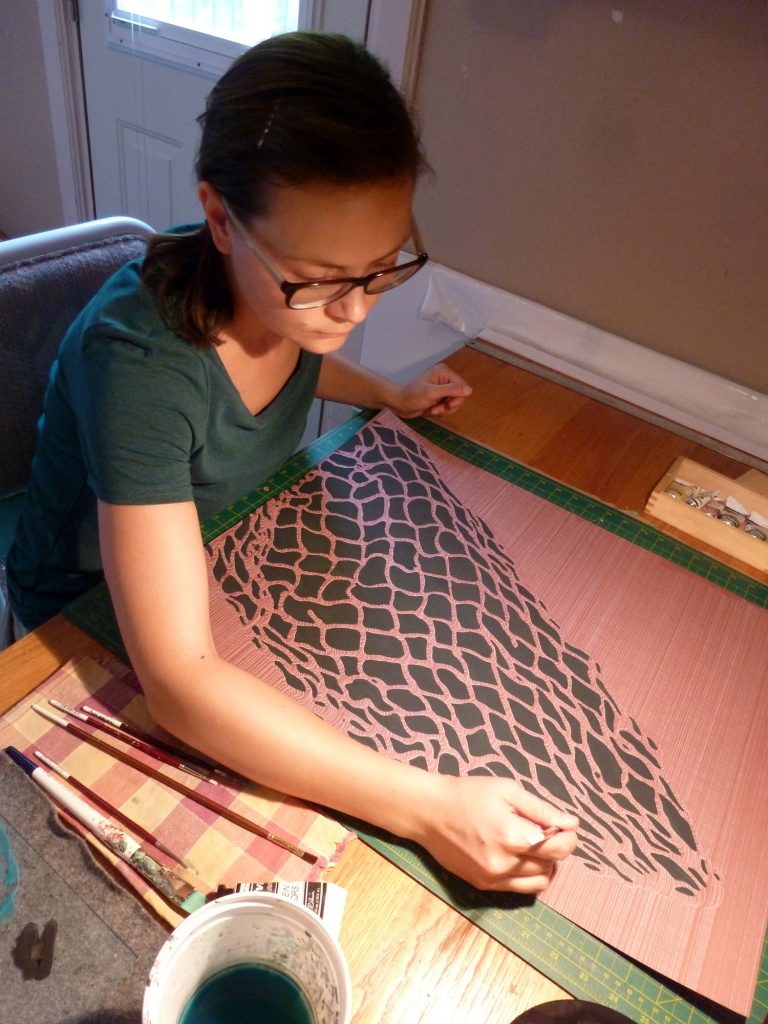 For Our Mutual Friend, Hobot found resonances with her own artistic practice in a piece by An Whitlock acquired by KWAG in 1982, a textile-like sculpture of latex and rusted steel wool eerily reminiscent of flesh (also, appropriately, untitled). During an artist talk on June 8, Hobot relates that after choosing Whitlock’s piece from among the 4,000 objects in the collection, she and gallery staff were uncertain as to how it should be displayed—it had never been shown to the public before. KWAG’s senior curator, Crystal Mowry, says that with such a sizable collection, there are inevitably a large number of pieces that have not yet been exhibited.

“Staff has been intensely involved in exploring the gallery’s collection,” she states, in order to fill in some of the gaps in knowledge about the history of the institution and its accessions, particularly those from more than two decades ago. Founded in 1956, the gallery’s creation myth features a lowly bicycle shed as its first home, and a group of visionaries who wanted to bring contemporary (and often risky) art from a variety of sources to the regional public. Many of the original founders have passed away, but the collection they started now includes works by Picasso, Dalí, and most of the Group of Seven, as well as newer artists like Edward Burtynsky.

Mowry sees the collection as a research tool, something to be actively used. For Our Mutual Friend, she invited artists who already have an engagement with research in their practice, a process that manifests in diverse ways.

“Artists are allowed to set their own rules and develop their own methodologies,” Mowry says. “Part of my curatorial capacity is to find out why artists do what they do.” Each of the five artists in Our Mutual Friend has their own particular approach to discovering the themes and problems that drive their practice. For Hobot, the connections between An Whitlock’s work and her own are both material and conceptual, focusing on investigations of processes outside of the artist’s control, tensions between the manmade and the “natural,” and the ambiguity created by things that resemble curtains.

Hobot studied fine arts at the University of Waterloo, followed by a stint in arts administration and curation at a variety of institutions prior to pursuing an MFA at Western University. While she has maintained a consistent artistic practice since her undergraduate years, participating in exhibitions and residencies across North America and Europe (including CAFKA.11, for which she and partner Patrick Cull—also represented in Our Mutual Friend—did a mobile knife-sharpening performance), she has more recently dedicated herself full-time to this pursuit. She works out of a studio in Kitchener and this year has had a solo exhibition at the University of Waterloo Art Gallery and a group show at Cambridge Galleries, in addition to Our Mutual Friend.

“I like being in group shows because it gives my work context,” she says.

The current exhibition is interesting in that relationships are formed not just among old and new (as the exhibition’s subtitle, “A Conversation with the Collection,” aptly conveys) but among five sets of old and new. Hobot is the only one of the five to focus on a single object from the collection, and the only one to employ sculpture in her own work as well as in her choice of “friend.” The arrangement of Hobot’s two pieces and Whitlock’s one thus becomes a dynamic, three-dimensional counterpoint to the drawings, paintings, and video work on the adjacent walls. 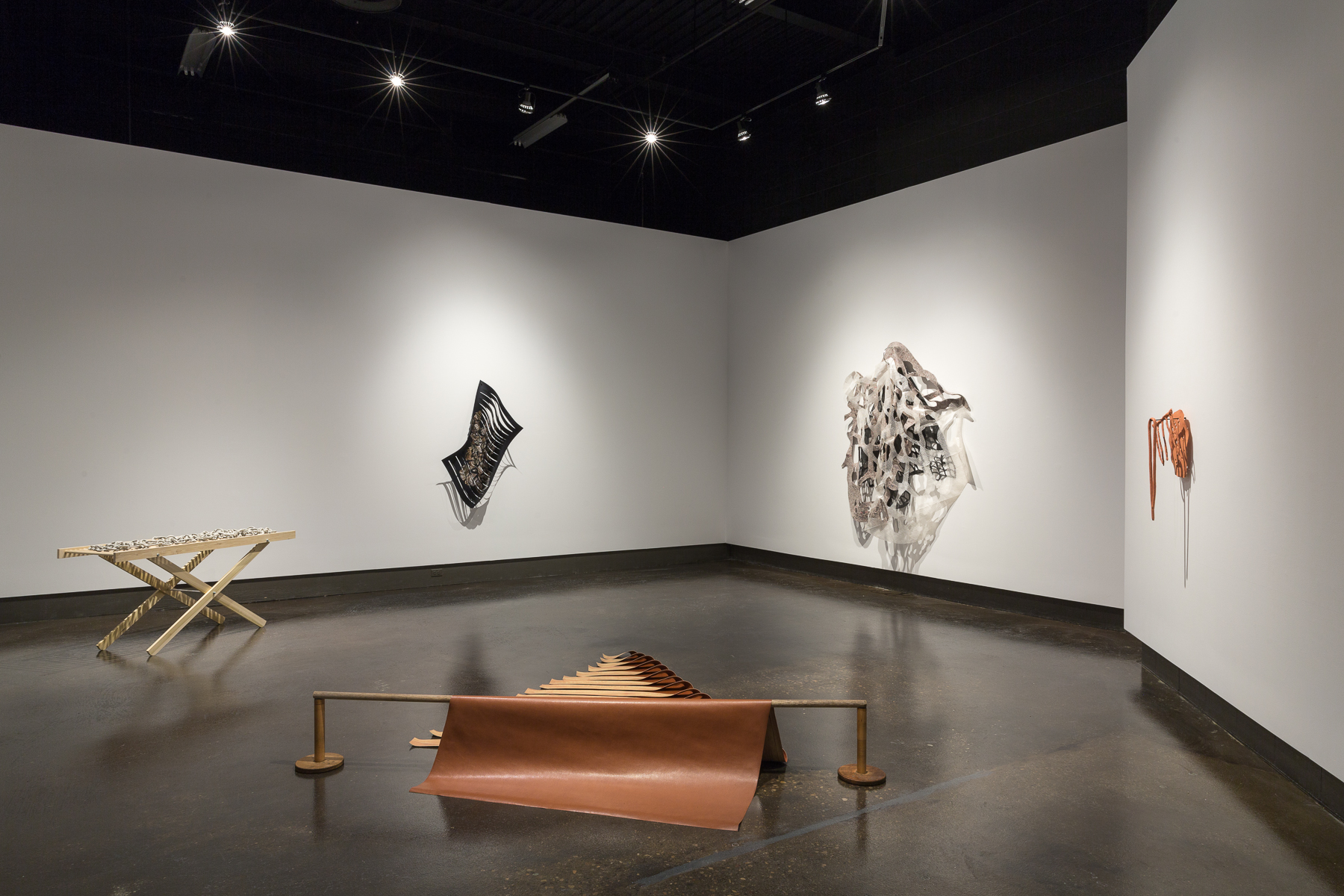 The problem of how Whitlock’s piece should be exhibited—on the floor or on the wall—was solved by the artist herself, who lives down the Grand River in Paris. But the uncertainty resonated with Hobot—her own wall piece was originally a floor piece that ended up wanting to be hung. Whitlock also stipulated that when installed, the latex and steel wool sculpture should have a looseness to demonstrate what the material is capable of; a slight drape at the top lets in light, emphasizing its translucency.

This sort of attention to details of materiality is another affinity between the two artists’ work. In Hobot’s pieces, cuts in the dark blue vinyl are splayed and folded to reveal an underside that has been treated as a canvas. On it is painted a semblance of wood like one might find on a stage set, obviously artificial and meant to trick the eye from a distance. Yet Hobot does not work from a design, instead taking cues from the materials as she works with them to bring an object into being. It is in the object itself that viewers must search for any meaning that may be obscured or revealed through this process.

Up next for Hobot is a research project as part of a Chalmers Arts Fellowship and a solo exhibition in December at Olga Korper Gallery in Toronto, which represents such eminent artists as the late photographer Robert Mapplethorpe and the artist/architect Will Alsop. As Hobot prepares for this major show, focusing for now on a substantial series of drawings, the idea of giving objects power “keeps meaning revolving and rotating” in the studio.

“I wish I could know what an object wanted,” she muses. “This is what keeps me motivated.”