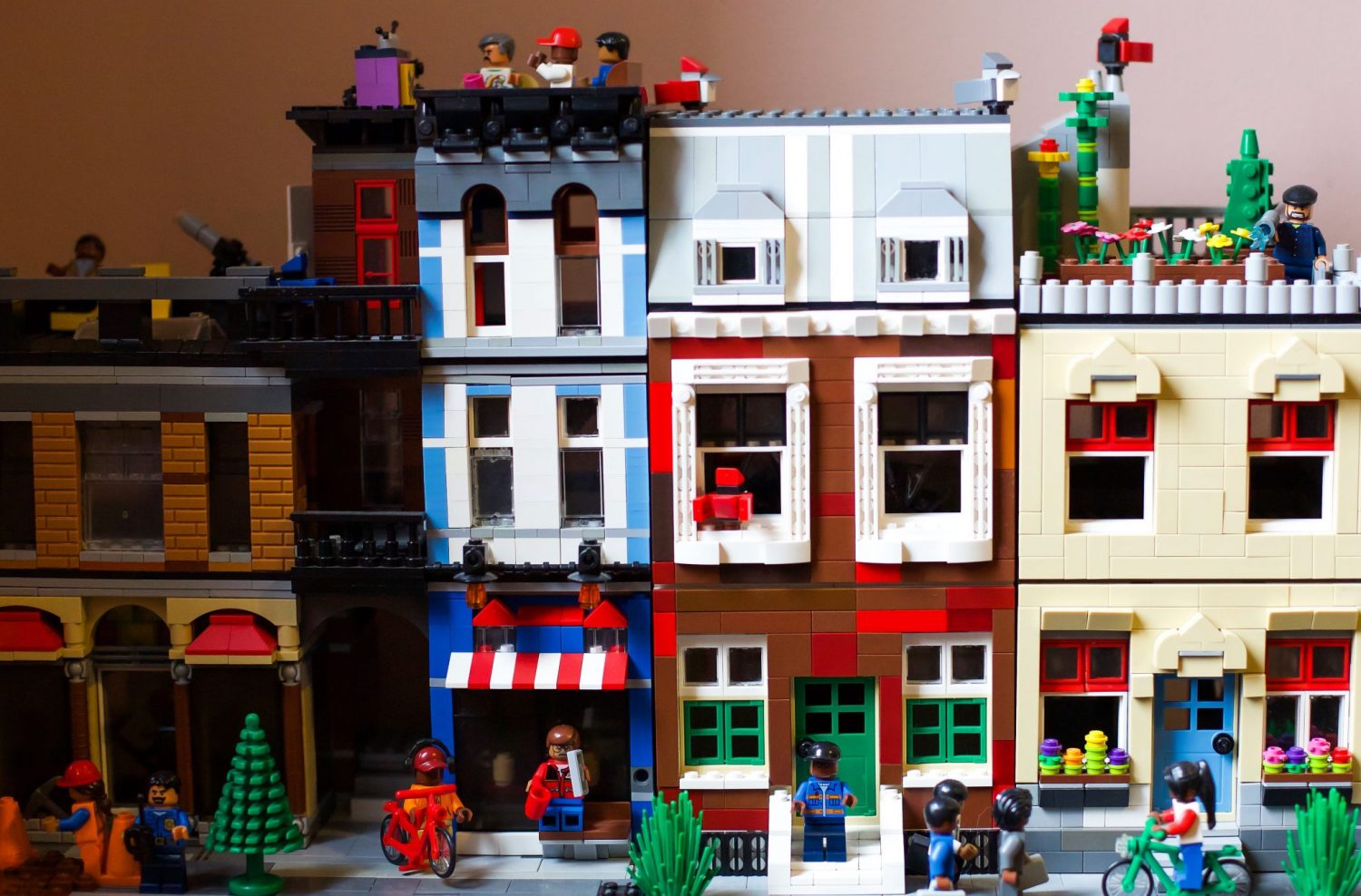 Grace Stemp-Morlock refers to her time before becoming a Lego artist as her “crazy year.”
“It began with six weeks in the psych ward in KW. It ended with suicide attempts, there was self-harm, there was more hospitalization and eventually I moved out,” she said.

The Kitchener resident has struggled with depression, anxiety, self-harm and mental illness all her life. In recent years, however, she has found an unconventional expressive outlet and therapy tool: Lego.

The tiny colourful bricks that are generally associated with childhood have a much deeper meaning to Stemp-Morlock. As a Lego artist, she uses Lego to build structures and scenes that depict some sort of social commentary, whether that be about race, poverty, sexuality or mental health.

Finding Stemp-Morlock in Queen Street Commons wasn’t difficult. When I walked up to her, the table was covered in Lego, where she sat, quietly clicking the bricks together and building nothing in particular. 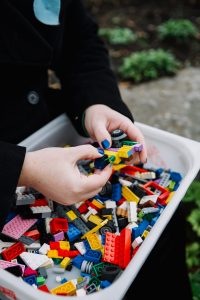 She explained that getting back into Lego as an adult was mainly influenced by her children.

“My kids got really excited by the Lego Movie and so I was able to start getting Lego again and as it came back into the house, I realized that they enjoyed it, but I loved it,” she said. “I would often find myself in the toy aisle checking out Lego sets, when I had no intent whatsoever of buying it for them. I was looking at it for myself.”

When Stemp-Morlock’s mental health worsened, Lego started to become more of a therapy tool than just a toy she and her kids played with.

“I found that it could calm me when I was frantic or anxiety ridden; I found that it had a sensational component. I could touch it, I could hear it, I could even smell it. That helped ground me in reality, pull me out of my head,” she explained. 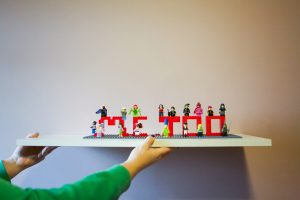 “It’s hard to be very self-reflective in a negative way when you’re building something. It pulls you out, in a way that watching TV or playing a video game doesn’t, necessarily. You’re actually constructing something. I started to realize that Lego itself was my therapy and I was reminded of my time in the psych ward and wished that I had Lego as a tool, then.”

The Lego sets we see today in toy stores are fantastical; with the partnerships Lego has made with franchises such as Star Wars or Harry Potter, you can build fictional sets in your own home. While Lego can act as a means of escapism, like reading or watching movies, Lego is tangible. That Star Wars X-Wing does actually exist in your hands. You’re using your imagination to make something that actually exists. For Stemp-Morlock, this is a huge part of the therapy.

But for her, it isn’t just building the sets that come with the instructions. 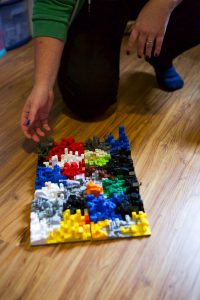 While she was in the psych ward, she began drawing pictures that depicted mental illness. She claims she isn’t much of a drawer, so after her time in the hospital, she decided to build depictions of mental health using Lego. This started her “Out of My Head” series — a series of heads built out of Lego with the top removed, so you can look into the person’s brain. One brain is on fire, one depicts a tornado going through a town, one shows a person standing on a rock in the middle of an ocean with sharks circling. Each head acts as a metaphor for mental health, something we can experience, but something we can’t really tangibly see.

“I started building with mental health in mind, and started to create it, and I realized that this was my new art form,” she said.

She’s a self-proclaimed “loud-mouth” and she’s using Lego to poke at the unjust aspects of the world we live in. 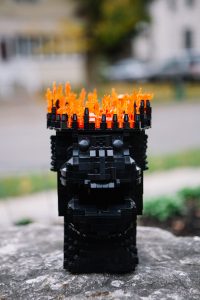 “Exploring mental illness with Lego got me started on a process that made me realize that this is a great art form, and for me, social justice is a huge issue. I’m a loud mouth, I’m an advocate. That’s basically what I do,” she said.

“I like poking at things. I’m a shit disturber.”

Stemp-Morlock has since made other scenes out of Lego that have some sort of social commentary. She made a neighbourhood scene and populated it with only people of colour. She explained that Lego characters have recently been whitewashed and there was very little representation of people of colour. To her, that was a huge problem, especially given that Lego’s target audience is children.

“The things that I build, for me, reflect parts of society that you can’t ordinarily see. So, if you said show me racism, how would you show that? Can you grab it? Can you hold it in your hand? Can you bring it to me? Children are very literal minded and they like things they can hold. In fact — all of us do,” she said.

She also built a scene that commented on poverty. She asked her friends to send her their broken Lego — the pieces they felt they had no use for. She built a neighbourhood out of these broken and unwanted pieces that resembled an impoverished community that she displayed at Toronto Brickfete, a Lego convention that she attended this past July. Amongst beautiful, expensive Lego displays, was Stemp-Morlock’s ghetto, built out of scraps and Lego junk that no one wanted anymore: a reflection on the fact that not everyone has access to brand new Lego sets. 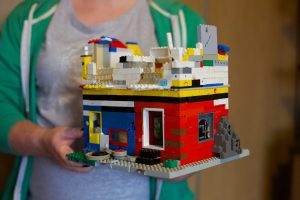 As Stemp-Morlock became more involved in the Lego community, she realized that she was not alone — other people were using it as a therapy tool and art form. Motivated by these shared experiences and the different ways people engage with Lego, she created a Facebook page earlier this year called “Lego Saved My Life.” The page acts as a safe place for AFOLs (adult fans of Lego) to speak freely about their trauma and how Lego has assisted in their healing.

Stemp-Morlock explained that the page started because she posted a photo of one of her builds on Facebook that got a lot of attention.

“I built an arm [out of Lego.] And I’ve done a lot of self-harm over the years, so my arms have scars all up and down them. I built an arm to replicate that out of Lego and I posted that picture and I talked about self-harm and a lot of people connected and I thought, there needs to be a place where we can support each other and where we can talk about this issue, and there wasn’t. So, I started it.” 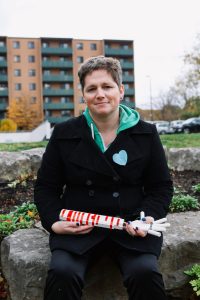 Although relationships through social media can feel disconnected, Stemp-Morlock has actually mailed Lego to some of the members when they find themselves in a time of need.

“When members of the group are struggling or celebrating, I will contact them and say, “Hey, do you want me to send you some Lego?” and I’ll send them just a small package of Lego,” she explained.
“Because, in my mind, having been suicidal many times, it’s hard to have something to look forward to or live for, when every second feels like an eternity of pain, it’s like making it through today is big. For me, knowing that I had Lego in the mail, I’d stay alive for that.”

She told me a story about a woman in the group who was struggling due to an upcoming anniversary. Stemp-Morlock asked her if she wanted her to send her some Lego, and she said yes. The Lego arrived on the day of the anniversary, and Stemp-Morlock later learned that this was the anniversary of the day the woman’s spouse tried to murder her. Years later, this woman was using Lego as a coping mechanism.

“They felt safe enough to share, because of plastic bricks. And that blows me away that this has that much power and I don’t truly understand it,” she said. 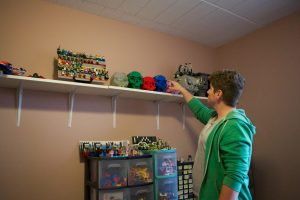 I hadn’t played with Lego since I was a child, and to be honest, I hadn’t really thought about it, either. When I told her this, she pushed some bricks towards me. I clicked them together as we talked, building a tiny tower that took zero effort at all. It made sense to me, how this could be calming. Lego’s intimidation factor is low and its association with childhood is comforting.
I asked her what her plans were and if she saw more in her future with Lego.

“I want to be engaging with this in a public forum,” she said. “As an artist I believe that’s the greatest calling you can have and sort of an obligation to engage with the public and challenge people’s perception of what is going on, and so I will do exhibitions whenever possible.”

This past summer Stemp-Morlock was at Brickfete and Open Streets, displaying her art. She was also at Makerween at the end of October and even has a conference planned with teachers in York Region to talk about what Lego can offer kids in terms of wellness.

“I’m really lucky that I found this medium and I know I am, because for a long time I really struggled trying to find something. Something to give my life purpose, something to allow me to be me and express the things that are inside,” she said.

As we left Queen Street Commons, she pushed the little tower I made towards me.

“Keep it,” she said. “And next time, try building something different.”

The little tower now sits on the corner of my desk and has been broken down and rebuilt, by not only myself, but other people who pass through my office. Who would have thought that something as simple as Lego would signify something as powerful as resilience, strength and the ability to have conversations about topics that are silenced far too often.