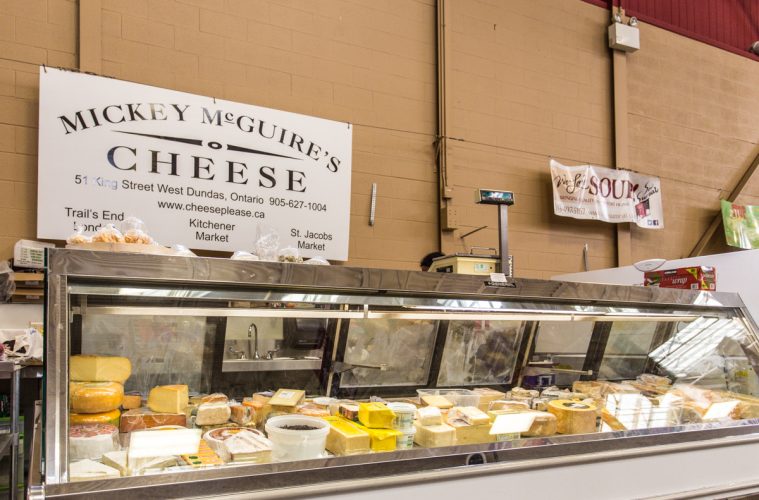 LEARNING WAYS OF CURDS AND WHEY

“Think of Brie Du Meaux. The first documentation dates back to the year 774, during Emperor Charlemagne’s reign. You’ve got Taleggio, out of Italy – dates back to the 10th century. There’s a sheep’s milk cheese called Ossau-Iraty, named after the Ossau Valley and the Irati Forest in the Basque region of France. That variety has been manufactured for more than 4,000 years.”

It doesn’t stop there. McGuire’s knowledge of this indispensable dairy product bounds beyond specific varieties.

“The Romans are credited with perfecting the method of cheese making that we use today. They developed the process of using calf rennet and were the first to add salt.”

“All the Roman Legionnaires received a ration of somewhere between two to four pounds of cheese a week. High in protein, travelled well and kept reasonably well. They took that technology to the whole of the Roman Empire. We still use all those same methods today.”

McGuire’s own history with cheese goes back to 1975 in Aylmer, Ont., when he and a friend, Gil, got into the bulk food business.

“Gil was selling a little bit of cheese and was doing a terrible job at it, and he knew it,” said McGuire with a quiet chuckle. “So I took his equipment, a small cooler, and cleaned it up. He gave me the name of his supplier and I went and saw him and bought some cheese. I was in the cheese business.”

From these beginnings, McGuire has built his own small empire that spans a popular brick-and-mortar location in Dundas, and regular attendance at St. Jacob’s, Trails End and the Kitchener market.

“I’ve always been in the market business,” he says proudly. “All my life, even before I had my driver’s license, I was selling at farmers’ markets.”

For McGuire, there’s something about vending at the market that he doesn’t get at the store.

“I really enjoy the market” he shared, affectionately calling it a “carny atmosphere.”

Always searching out new product to offer his customers, McGuire sources his cheese from a combination of distributors and manufacturers.

“How many varieties of cheese are there?” he asked rhetorically, “the only limit on the variety of cheeses is the imagination of the cheesemaker.”

As one of the few cheesemongers at the Kitchener Market, McGuire encourages customers to shop around. “We’re one of two or three vendors at the market. Go try them out. Try everything that’s there and pick what you like.”

Passionate about his product, McGuire encourages his customers to explore the world of cheese. He gladly hands out free samples to marketgoers.

“I don’t care whether it’s the least expensive, or the most expensive, if you don’t try it, you’ll never buy it,” he said, before quickly adding with a laugh, “just don’t come for lunch.”

Mickey McGuire’s Cheese sets up shop at the St. Jacob’s, Trails End and Kitchener Market during regular operating hours. The store location can be found at 51 King St. West in Dundas, Ont.