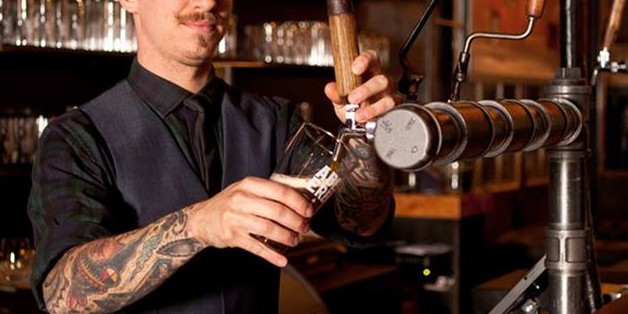 In November, a brewpub opened in uptown Waterloo bearing the name of the city’s founder, Abe Erb. It’s a bold move to take on the name of a local historical figure, as it gives you a lot to live up to.

I avoided going in for the first little while, giving them time to work out the kinks and to make sure their Founder’s Beers were available (they were frequently sold out shortly after they opened). I’m happy to report that I finally made it in, and it seems like they’ve done old Abe proud.

Abe Erb sells their own beer, brewed on site, that they call their Founder’s Beers alongside a well-curated guest tap list. When I was in, the home brews they had on tap were the Buggywhip IPA, Das Spritzhaus, which is a hefeweizen, and Whiplash, an Imperial IPA.

As a fan of IPA’s, I was prepared to be disappointed by the Buggywhip. If you try to make an IPA that has a wide appeal, you’ll often end up with something that is less hoppy and flavourful than I would like. Buggywhip isn’t super hoppy, but the hops are plentiful, and the overall flavour is quite good. Rather than just a thin body with a hit of hops, this beer has a nice full body.

After the Buggywhip, I have to say I was a little let down by Whiplash. Imperial IPAs are usually hoppier and more flavourful than their non-Imperial counterparts. While this one was, it just didn’t take it as far as I would like to see, based on the flavour they brought out in the Buggywhip. It’s probably more palatable for your average drinker, but I wanted more.

My beers accompanied a delicious burger, with fries that tasted fresh from a chip truck. The look and feel of the decor is executed well, and creates a great atmosphere. Overall, Abe Erb is doing things right and I look forward to going back soon.

Have a question for Jon? Email us at communityeditor@thecord.ca