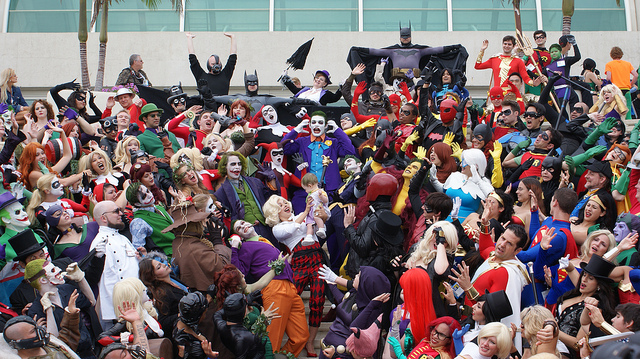 In the pantheon of geek culture, few things are more celebrated then the holy grail of all events, Comic Con. What started in San Diego as a celebration of all things comic book, has now evolved into a pop culture mecca. Every year, celebrities and fans from all walks of popular culture – movies, television, and video games, descend on San Diego to partake in the culture they love with other like-minded fans.

On Feb. 28, comic lovers can stay home instead and visit Kitchener city hall. As Kitchener Comic Con aims to emulate what fans have come to expect and love from similar events around the world.

“We had Oktoberfest, we had the Blues Festival, but it seemed like the “geekier” culture was kept under the rug. With Con-G (a con that ran for 6 years in Guelph) wrapping up… it left us with Toronto, Niagara Falls and Hamilton as our closest options,” explained Dennis Claveau, media organizer for KCC.

For the organizers of Kitchener’s first Comic Con, community involvement is their driving force.

“We’ve been focusing on highlighting local artists, local cosplayers, local businesses and showing just how talented Waterloo Region is,” said Cleaveau. “We want to support local entrepreneurs and talent, because they make this city and region what it is.”

So far the community has responded with nothing but positivity. Claveau explained that first time con-goers are sure to find something new to experience or purchase.

“Attendees should expect to be wowed and tempted by the amazing original artwork, brilliant original comic books and crafts that our vendors are selling. We do have vendors that are selling unique licensed merchandise (Pokemon Plushies, etc.) as well.”

Dressing up as favourite characters from comics, cartoons and movies, better known as cosplaying, is a large part of any convention and the KCC will be having a costume contest for crafty fans.

The other main draw of any con is a roster of guest speakers. While none have been announced yet, Claveau assures that they’ll have speakers that will impress both older and younger fans.

There’s still time to snag a table if you’re a vendor looking to get involved.

“We are still accepting applications for vendors and volunteers! It’s one of the best ways to get eyeballs on your talents.”

Despite this being the first time an event of this type and size will be happening in KW, Claveau is nothing but optimistic.

“I can’t tell you how many people told me that a convention would “never work” in this area and well, we’re proving that wrong! We’re building it, and they are coming.”