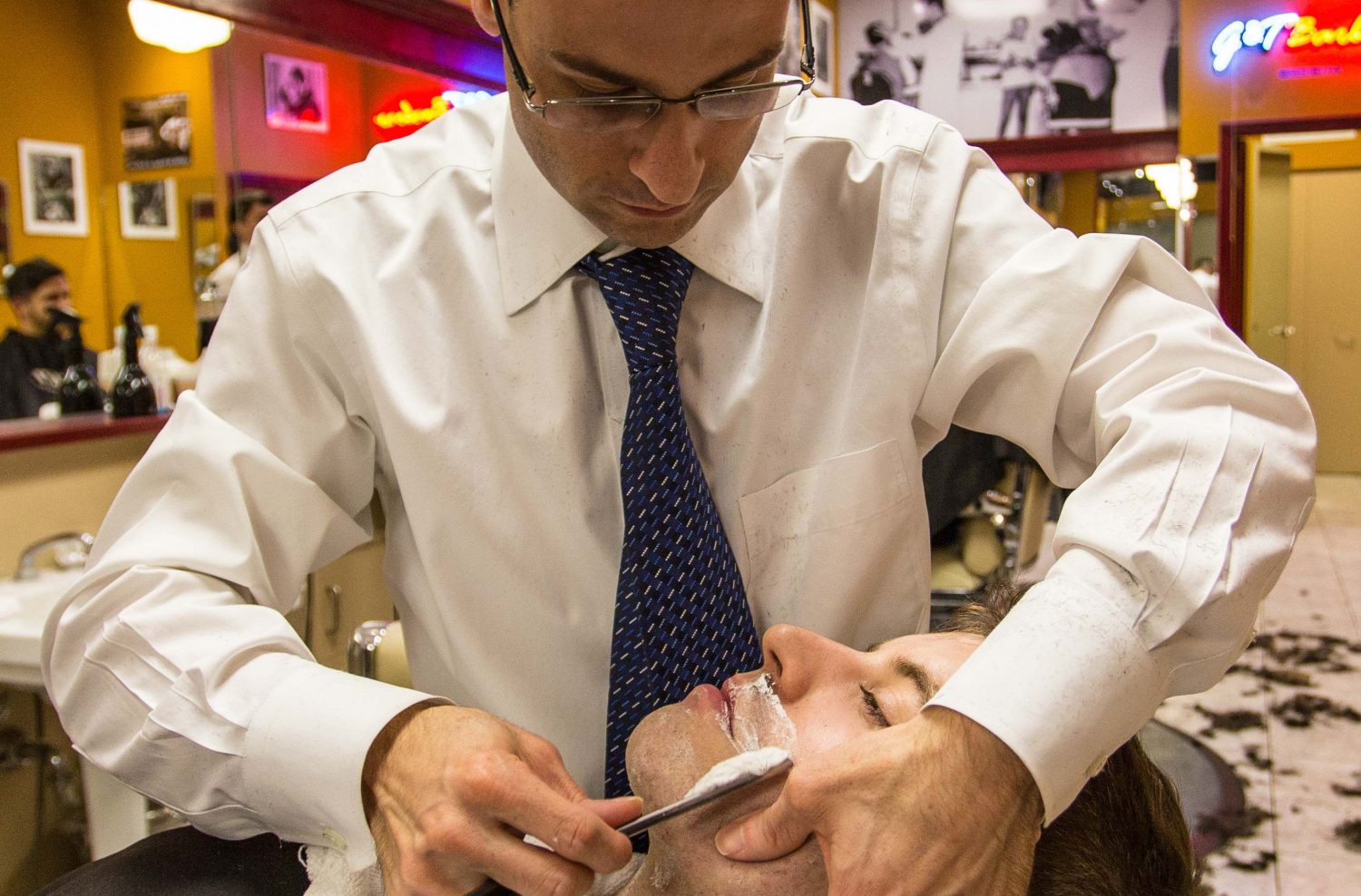 Walking into a traditional barbershop, it’s instantly familiar. In the age of supposed interconnectedness, it is one of the few places that force us to come together and share a common, inescapable experience; everyone has hair that grows. The profession has changed over time, but modern barbershops remain inviting, timeless and distinctly cool. Uptown’s G & T Barbers and Men’s Hairstyling is no different.

The shop opened its doors in 1971 and the interior drags the decade with it. The chairs, workstations, décor and employees are charming and accumulated after many years in business. Pictures of old-time movie stars smile across their frames to contemporary athletes, both mounted on sunshinecoloured walls of old. The barbers themselves span several decades, conveying a certain timelessness of the trade.

Modernity has snuck past these vintage barbershop watchdogs and into the shop. TVs, usually set on sports, hang from the wall and there are phones in the hands of some waiting patrons. Most prefer company and conversation to their phone screens – in this place anyway.

One of the most prominent offerings of a bona fide barbershop is a straight shave – a traditional shave with a single blade that typically folds up into its handle. Straight shaves are synonymous with the barbershop experience and speak to the skill-level of the shop. Like so many others, I trust G & T with my hair. On this day, I hoped to put the shop’s degree of skill on display and opted, with some apprehension, for my first straight shave.

Eddie is my regular barber so naturally I approach him for my first time under the blade. Eddie, and the other barbers, are consummate professionals, coordinated in black shoes, black pants, white shirt and dark tie.

Eddie looks at home here and that’s because he has been here a while.

“I’ve been at the shop for about 13 years,” Eddie explains. “My father used to work here and then I got into it.”

Eddie’s connection to the shop goes far beyond his time at G & T. His father worked here for 21 years before passing away.

“He used to take me in when I was a little kid and I used to watch, watch, watch. Clean the shop, sweep, you know what I mean.” 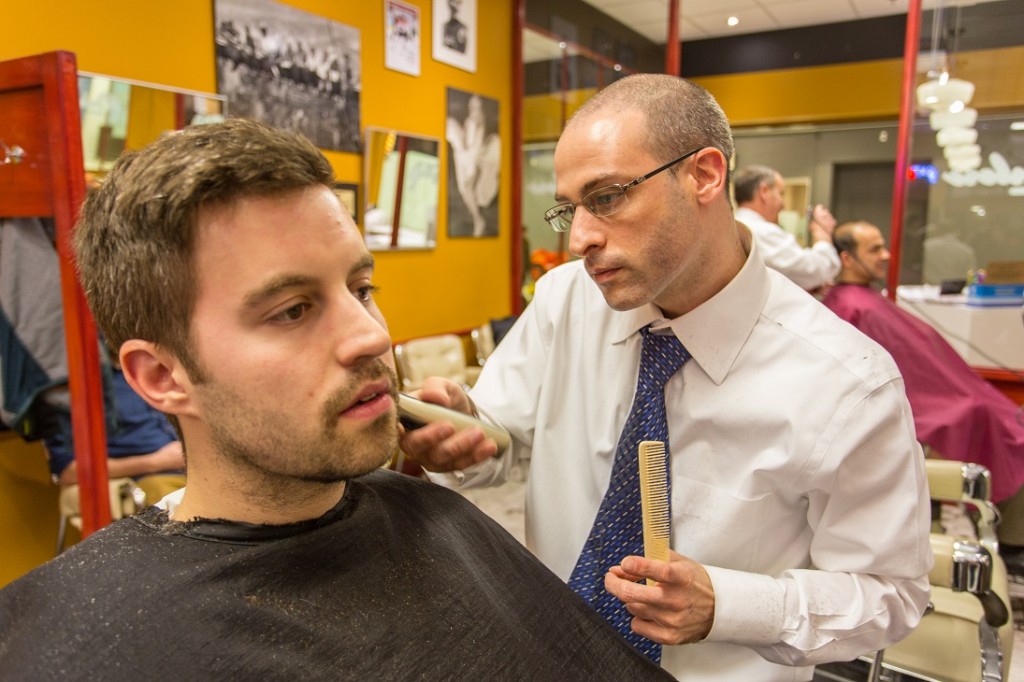 Eddie is small, wiry and intense. His eyes are alert through his glasses. He is friendly, speaks quietly but clearly and has one of those voices that forces you to listen. He has a scant, uniform layer of stubble on his face and head, not unlike a petite Jason Statham and with a similar assuredness.

Eddie moves quickly and with purpose and often. When making the familiar trip from chair to work station for a sip of coffee or to exchange tools, he slides to a stop rather than stepping. Working Monday to Saturday, Eddie must slide across this same patch of floor thousands of times. Something about the way he does it suggests it’s one of those things – like the job itself – that never gets old.

As I approach the chair Eddie checks in to ask, “Have you had one of these before?”

I tell him no, not really and that I’d had a straight-shave trim a few years back to shape my beard. It seemed far too long an answer in the space of assuredness and tradition.

“Do you just want to shape up around the beard or what do you want?” Eddie asks.

“We can just take it all off.” I respond.

“Oh, even better” he replies.

Eddie quickly takes a trimmer to my short beard to reduce it to a more manageable stubble.

Eddie slides away again to get towels, I’m sure he’ll wear the floor thin on the oft-treaded path.

As I sink into the chair and await Eddie’s return, I take in my surroundings. Golf is on the television and the topic of conversation. While the technology has changed, the barbershop conversation could have been from any decade. Several newcomers join those already waiting.

Eddie returns with the necessary tools and puts a rolled towel at the rear of my neck. Doing his best Sweeney Todd, Eddie cranks the chair back and I go nearly horizontal in preparation for the shave. 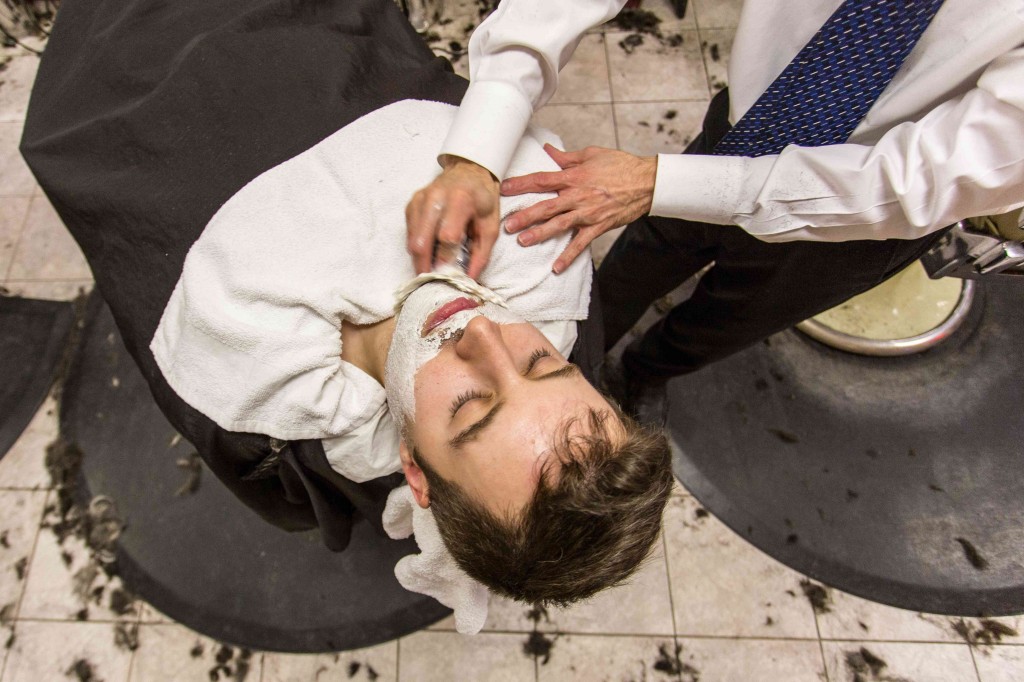 Neither of us exchange words as Eddie continues to prepare and the comfortable silence is reinforced by a hot towel being wrapped around my face. Under my chin and then up around my face to my forehead, Eddie moves the towel in rhythmic motion I’m sure he’s performed thousands of times. He rotates hot towels for a few minutes, getting one hot and wet while the other one rests on my face. The first two are surprisingly hot. The next two are much more soothing.

I lose track of my count but my face is wrapped and unwrapped at least six times.

Eddie quickly gets rid of the towels and starts into the shaving cream. It feels like there is hot water mixed in there but my eyes are closed as he starts to massage the mixture into my skin with a brush. It’s wildly relaxing.

The massage lasts a few minutes but it’s easy to lose track of time in the chair.

Eddie puts the brush away and brings the blade close to my right sideburn, indicating the shave is about to begin. 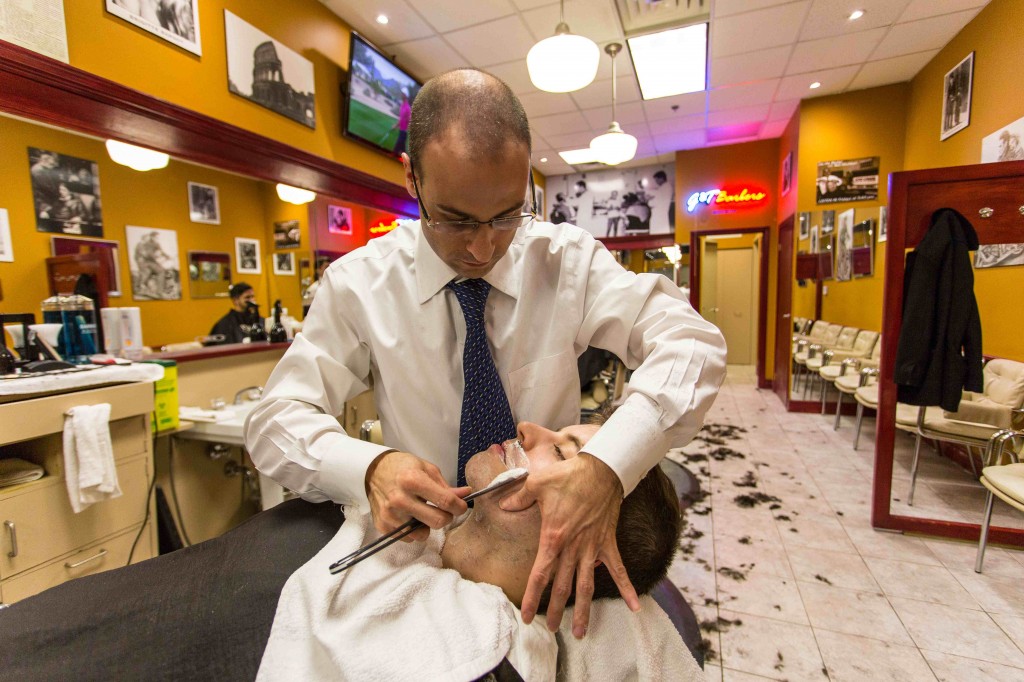 “This is going to be a little rough, because, you know.”

With that, Eddie begins to remove the hair from my face; first my cheeks, then around the mouth – another confident rhythm in Eddie’s memorized motions. He goes with the grain and then against it, smoothly transitioning from one direction to the other. It isn’t painful but he was right, it isn’t smooth. From around my mouth he moves to my neck and then above my lip.

A chair over, a small group enjoy an audio clip of an angry caller in Saskatchewan, phoning in to complain about the weather report.

He shaves under my nose and then replaces the cream on my face before going over my entire face again, in what I think is same order as the first time. I hadn’t considered it initially, but I realize now it takes a certain amount of trust to let someone near your neck with a blade. 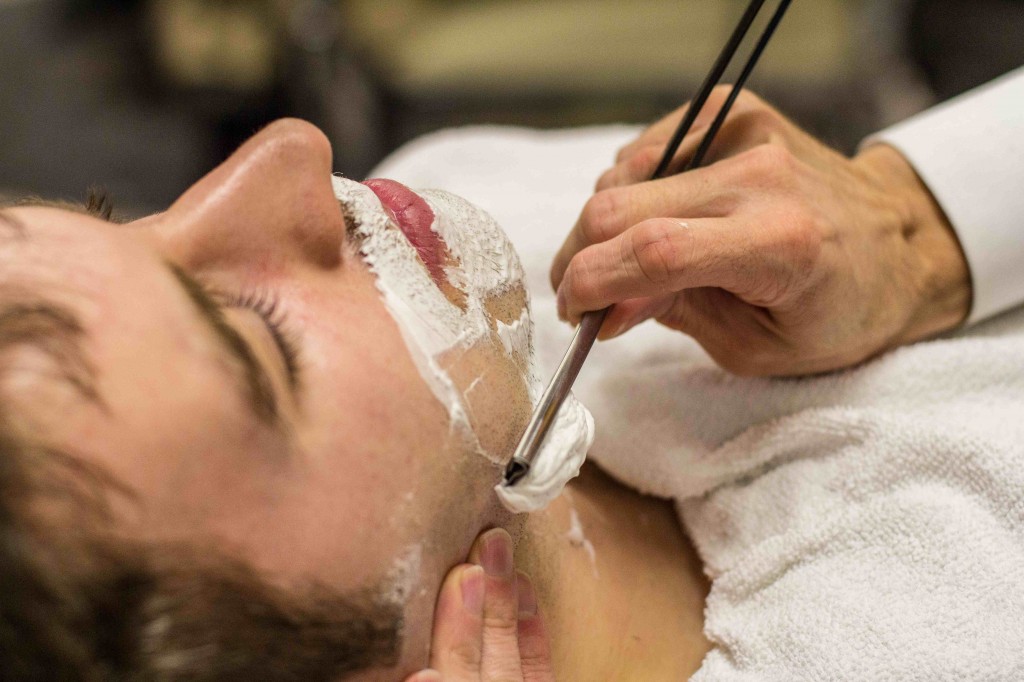 As Eddie drags the blade upward from my chin to under my lip, the shaving portion of the ritual concludes. By the last stroke, I’ve lost all track of time.

The carousel of rotating towels begins again, starting warm and ending cold to close up the pores and help the skin. My face yearns for more cold towels as Eddie removes the last one. Instead, he grabs what appears to be a perfectly formed ice cube (what I now figure was an alum block) and begins blotting my face. It stings like a paper cut each time it makes contact with my skin.

Soon, Eddie switches from blotting to a full on massage, rubbing the rock all over my face and neck. The affected area appreciates the cold. 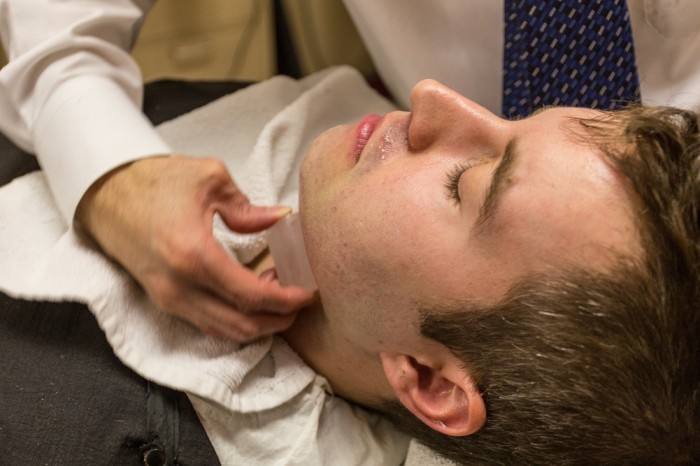 “It’s good for your skin”, Eddie reassures me, and despite the sting, my face does feel better after.

One final towel greets my face and Eddie returns me to 90 degrees in the chair. He takes this opportunity to remind me of my imminent return to the familiar seat.

“You’re due back soon for a haircut, how long has it been?” he asks.

“About three weeks,” I reply, “maybe a little less.”

“All right, that’s it,” says Eddie as I get up from the chair. I’m rushing to get to the cold winter air for my confused face, which hasn’t been clean-shaven in some time.

“Thanks very much Eddie.”

I exit the shop baby-faced but instilled with some kind of accomplishment or nostalgic step to manhood. I’m already looking forward to seeing Eddie again in a couple weeks.

A reliable barber is hard to find, taking the time to revert to tradition is even harder. Reducing to fewer blades, one to be exact, is the first step on the path to the lost art of a straight shave.