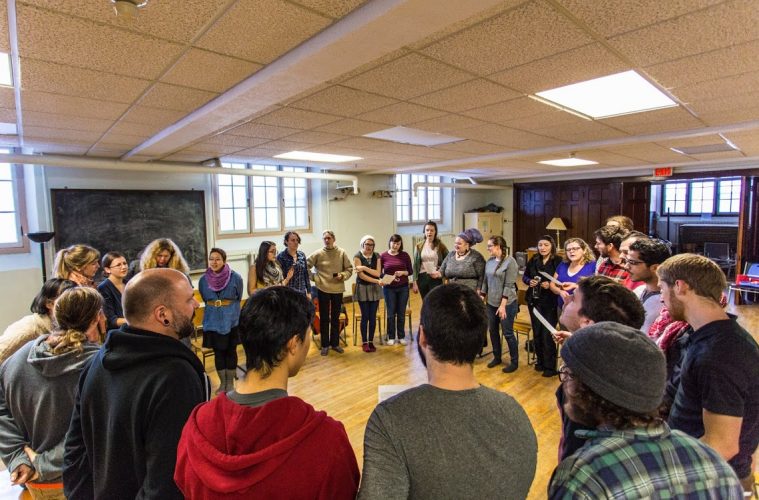 WILL SING FOR SOCIAL CHANGE

I’ve never been the kind of person who holds signs on the street to encourage social change. I’m more of a ‘tweet angrily from bed’ kind of girl – a cheerleader for those who actually go create social change. However, this being a new year and all, when I caught word that Kitchener’s Radical Choir was banding back together and having a new members meeting, I jumped at the chance to go and see what the hype was all about.

I had my expectations going into the meeting – guitars, wool hats, cozy sweaters; an eclectic bunch of 20 and 30-somethings who want to use singing to deliver a message.

I’m happy to report that when I joined them during their first meeting on Sunday, Jan. 25, at the Church of the Good Shepherd in Kitchener’s civic district – I found just that and a great deal more.

Radical Choir originally came together and had a good run between 2008 and 2012, before falling by the wayside of busy schedules. The group sang covers and originals of politically themed songs that pushed for social change both locally and globally.

Laura McDonald, an alumnus of the original choir was back in action on Sunday, with high hopes of rebuilding the momentum the choir originally had.

“Radical Choir was a massively formative period in my life, so I’m looking forward to having that again. The big thing for me is that it was a really reinvigorating experience – coming together every week and having a joyful time – it really refreshes the spirit.”

Like me, there were a lot of people who were experiencing Radical Choir’s unique community for the first time.

I say community because within 15 minutes, we were together in a circle, chatting, warming up our vocal chords and any feelings of apprehension had long since evaporated.

Singing your name to 30 or so strangers is a really great way to jump into the fire.

The bulk of Radical Choir’s first practice was focused on making everyone feel at home and comfortable. We broke out into smaller groups of five to discuss what brought us to practice, what we love about singing, our favourite type of music. During this chat I met Emma Dines who was checking out Radical Choir after missing out on its first iteration due to a busy schedule.

“I saw the choir perform at a city event a few years ago and thought it was pretty cool,” said Dines. “I would have liked to join a professional choir but can’t afford the time commitment. I really like the ethos of this group and what the choir sings about is closer to my interests and heart – so it’s a double whammy.”

Our breakout groups had to report back and present our findings through speech, song, or of course, dancing. My group chose to do a rendition of Destiny’s Child’s “Bootylicious” given, a variety of factors and a collective early 2000s adolescence.

As our practice went on, we learned more about Radical Choir itself, from the two individuals who brought us all together – Richard Garvey and Janice Lee.

Most people know Garvey from his silk-like, folk performances across Waterloo Region. Lee, also a folk artist, is likely best known for her story telling and poetry. Both are fixtures within the local art ecosystem and are the perfect culmination of passion and talent to reignite the choir. They would be first to tell you that they aren’t really in charge. Radical Choir is led by everyone.

Beth Murch, another poet and spoken word artist – and fellow alto – had her first taste of Radical Choir alongside myself.

“I heard rumours of the Radical Choir and then I saw it was resurrected on Facebook so I thought I’d be in it this time around,” explained Murch. “I like singing and I appreciate that it’s people coming together who share similar concerns for the world and our community. It’s nice that it’s noncompetitive, that it doesn’t matter if you’re a super star, and that it’s about relaxing and having a good time”

Towards the end of the session we started diving into songbook content.

As an easy introduction, we tackled Bobby Darin’s “Simple Song of Freedom” in four-part harmony.

While it proved to be an exceptional task for our group at first, by the time our session was ready to come to a close, we sounded pretty close to on-point.

As we wrapped up, I started to realize how lucky I was to have had the chance to witness a community forming around me. The members of Radical Choir are not standoff-ish; they are warm and welcoming. They are not judgmental; they are passionate.

This group of 20 and 30-somethings is much more than guitars, wool hats, and cozy sweaters. They are a group of funny, talented individuals, who want to raise awareness about issues that are important to members of our local and global communities.

If you want to sing for social change or want to learn more about Radical Choir they want to meet you.