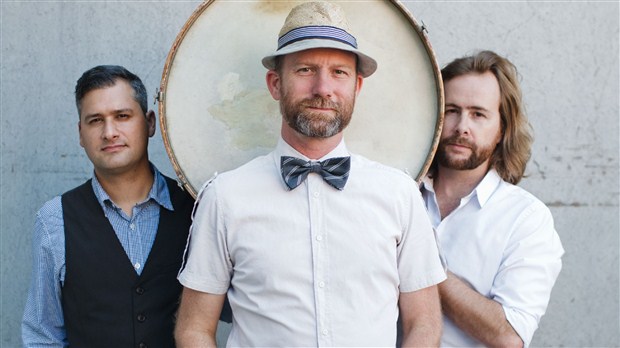 Coming off the success of winning the 2013 Juno for roots and traditional album of the year for their third album Days Into Years, Elliott Brood are back with a new album, ripe with all the Canadian alt-country twang that you can handle.

The album, entitled Work and Love opens with “Little Ones.” It’s a song that has the guts of Bruce Springsteen style heartland rock, combined with piano and slide guitar to elicit even more emotion.

The following track, “Nothing Left” pairs the raspy Jason Shevchuk-esque vocals with a melody that would make the deepest of folk-punk ballads jealous.

Delving deeper into the album is one of Brood’s most ambitious tracks to date, “Mission Bell.” It features a backing trumpet line that brings on visions of spaghetti-like Western films. Never ones to shy away from breaking the mould, the trio quickly has you biting into a clichéd “face melting” guitar solo.

Followers of Elliott Brood’s earlier work on Mountain Meadows and Ambassador will recognize that their following album Days Into Years was a different, more mature sound. It’s safe to say that Work and Love is no exception to a continued evolution, as they find themselves in a far more pop laden sound. Don’t worry though – purists will still find plenty of the interesting treats that gave Elliott Brood the genre nomenclature of “death country” in the first place.

That said, the most shining example of hooky, pop radio-friendly sound would be on the uncharacteristically upbeat “Jigsaw Heart.” This is arguably the stand out track from the album; “Jigsaw Heart” really pushes the envelope as far as Brood’s Canadian indie radio success goes. This song seems like it draws influence from the entire gamut of today’s biggest Canadian bands, from The Strumbellas to The Arkells, while still maintaining that signature twang that only Elliott Brood could provide.

It’s safe to say that Elliott Brood’s Work and Love is another impressive notch on the belt of the Toronto band, which is slowly becoming a Canadian mainstay. With an album such as this, it’s safe to say that they’re sure to put on a fantastic show when they come to the Starlight on Feb. 26.