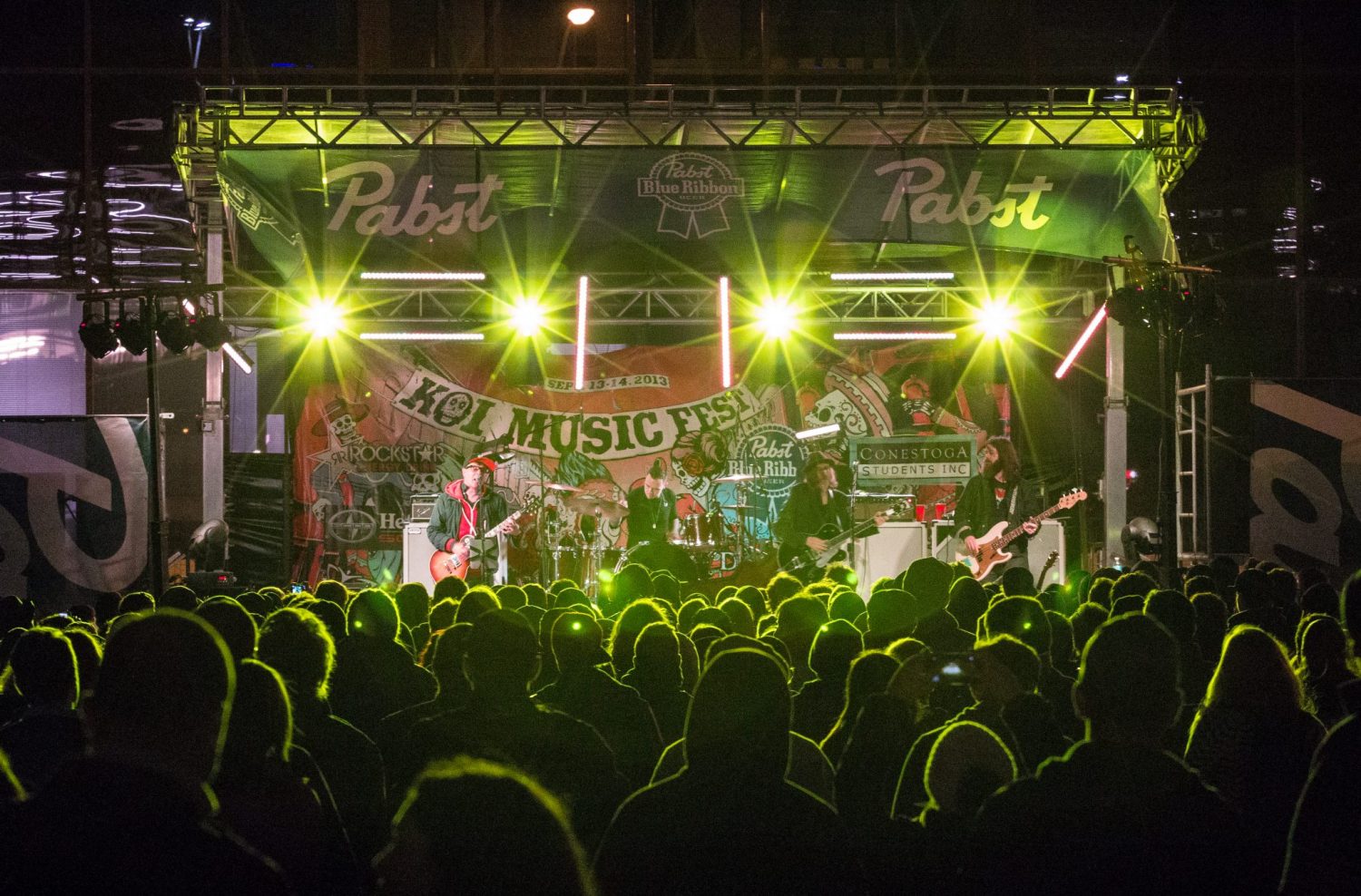 In 2010, Kitchener-Waterloo experienced its first ever KOI Music Festival. Since then, the festival has changed size and shape every year — starting out as a rather large festival that took over the downtown core, to a smaller show in 2016 in the Centre in the Square’s parking lot.

This year KOI will take place over the course of two days at Maxwell’s Concerts and Events in Waterloo on Sept. 15 and 16.

“KOI Fest stands for Kitchener Ontario Independent Music Festival and we are a music festival dedicated to bringing in the best local and touring alternative music,” Kyle Wappler, co-organizer of the festival said.

Last year, KOI took the form of “KOI Fest at the Parking Lot,” featuring Sam Roberts Band and Tokyo Police Club — artists that are well known, but not necessarily in the “alternative” scene that KOI strives to celebrate.

The theme for this year’s KOI  is “Rebirth” which is nonetheless a nod towards getting KOI back to it’s roots.

“This year was kind of a rebirth year — going back to the old format,” Wappler said.

There were several factors that contributed to taking this year’s KOI off the streets of downtown Kitchener and into Maxwell’s. Wappler explained that much of that decision had to do with getting a later start with the planning process. Currently, downtown is in a state of uncertainty, with the LRT construction and various road closures. Wappler said that the process of bringing KOI back to it’s original roots as an outdoor festival was far too complex. Applying for grants, hiring security and obtaining permits were all roadblocks that contributed to choosing Maxwell’s as this year’s host.

“This is like a ground up festival starting all over again, starting out of our pockets and just doing it because we want it to keep going.”

After last year’s hiccup, the changes made to this year’s KOI appear to be pushing the festival back to where Wappler and his partner, Curt Crossman, envision in to be. The festival’s line-up is more in tune with the “rebirth” theme, with headliners like Silverstein and Cancer Bats, bands that heavily influenced the harcore scene that arguably hit its peak 10 years ago.

“The lineup that we put together, I can say Curt and I are both stoked on it. As much as we are promoters and organizers, we’re fans, too. We like the bands that we’re bringing in. We enjoy seeing them,” Wappler said.

Popular KW based band Kingdoms, who called it a quits in 2010, are also getting back together to perform at this year’s KOI, along with Necrocarcass and Two Liner, two other bands hitting the stage for a reunion show. Kingdoms played a reunion show at Maxwell’s this past December, which brought together KW’s hardcore scene, a group of people that were once one of the liveliest communities in KW.

So, is the “Rebirth” theme trying to bring back what KOI used to be, or is it trying to resurrect an entire community that was alive and well 10 years ago when hardcore music was (arguably) the best it’s ever been?

“The scene bred some people who gave a shit about music and who gave a shit about one another and the community. Over time, there was this really bizarre transition, especially in metal hardcore and alternative types of music and [KOI] has a great vision for it, and I think that’s an awesome thing, but the real question is, is it sustainable?” Hutton Wierzbicki, frontman of Kingdoms said.

“That’s kind of the reason why we agreed to do it. It was kind of like ‘hey, we want to do this thing, and we want it to be an homage to the way things were.’”

Kingdoms started in 2008, before playing their final show at The Wax in 2010. During those two years, they toured, creating a small fanbase that is still excited to see them now, seven years later. For Wierzbicki, the KOI show is all about nostalgia.

“When [Wappler] came to us, he knows that I have a rose coloured glasses sort of version of how I think the scene should be,” he said.

For Wierzbicki, the KW hardcore scene was about a lot more than just music. For him, and for many other young people in KW, it was about finding a group of likeminded people that you could call your family.

“You go to those shows when you’re 14 and 15, you’re young, you’re super impressionable, and you look up to those guys and you go ‘wow, this is amazing,’” he said.

“I remember Geoff Rickly [of Thursday] on stage being like, ‘If you guys are out there, and you’re looking up here thinking, I could never do that, just do it. Start a fucking band. Contribute to your scene.’ He went on this five minute diatribe about how important it is to be a part of something, but when you’re 15, that hits you in the chest.”

And that’s when Wierzbicki got into music. He went from being an impressionable audience member to the frontman of a local band that would make an impact on musicians and fans younger than himself.

“Our bands were shitty, but we started them,” Wierzbicki said.

So what happened? It’s no secret that popular music comes and goes in waves. The rap we listened to in the ‘90s isn’t the same rap that the kids are listening to now. While there are still younger punk bands in KW, like Goldfinch, a Waterloo based band consisting of guys in their early 20’s who will also be playing at KOI, the scene just isn’t what it used to be.

Somewhere along the line, Wierbicki noticed a shift. He believes that going to shows was no longer about assembling a community of likeminded people.

“What happened was, we were always outsiders to that popular norm. It was called alternative music for a reason [and] as we started playing, and as we starting getting more popular, shows really started to change. Going to a hardcore show wasn’t about community or unity anymore, it was about who had the dopest Nike’s on and who had the freshest flat-brimmed cap.”

Wappler, too, is cognizant of the fact that the scene experienced a shift, yet still stands by KOI’s ultimate goal.

“It’s a different climate, for sure. I don’t necessarily know if it was any easier at that time, to quote-on-quote make it, or go far, but there was definitely a lot more people in that community to kind of support it and push it forward. Now it’s a very niche market. But, at the same time, it seems a little more connected. Everyone knows each other now,” Wappler said.

“The community’s still there, I just guess we’re getting older.”

So is KOI’s target audience only directed to people in their early 30s? The nostalgia vibe appears to be the main selling point.

“I think [KOI is] going to be largely an older group of people. That show in December was like a big family reunion. I saw people I hadn’t seen in a long time,” Wierzbicki said.

While the idea of a “reunion” is something everyone can support, this still begs the relevance of Wierzbicki’s initial question — is it sustainable? Is it profitable? Will we see KOI back for another year? Do the young people of KW care about this kind of music anymore?

Wappler assured that KOI is looking forward just as much as they are looking backwards.

“At the same time, we’re looking forward to the future, so we’re bringing in brand new acts and showing that we’re still adapting. We’ve got newer bands like Gideon, who are just killing it right now.”

Nonetheless, KOI Fest appears to be alive and well. They may no longer have the massive capacity that was downtown Kitchener, but they are still giving a group of people in KW a gathering place. Whether it’s about the music, or friendship, or community, or “dope Nike’s,” KOI will continue for another year, to give the fans what they want.

“I just hope people come out and people are still interested and support it,” Wappler said.