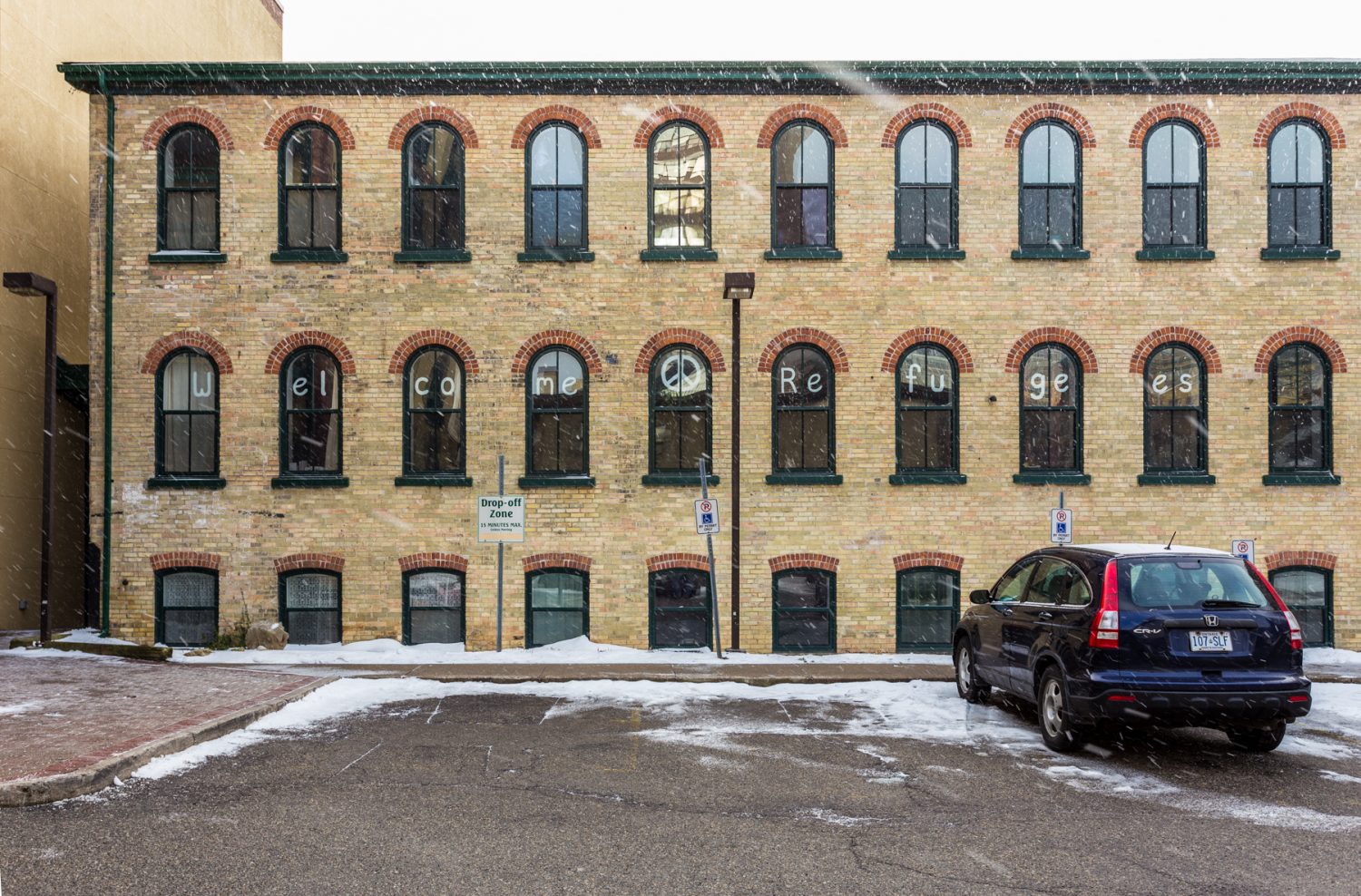 It Takes A City: Refugee Resettlement In WR

“I love Kitchener-Waterloo,” Jawad Ghabra says with a smile, while we chat in his restaurant, Shawerma Plus. Ghabra came to Canada to help his Syrian family run their now award-winning restaurant, and as the aroma of falafel wafts around us, he explains that “once you love a place, you want to give back.” So when a friend came into the restaurant one day with the idea to sponsor a refugee family, Ghabra immediately agreed. “I’m in, 100 per cent,” he said. 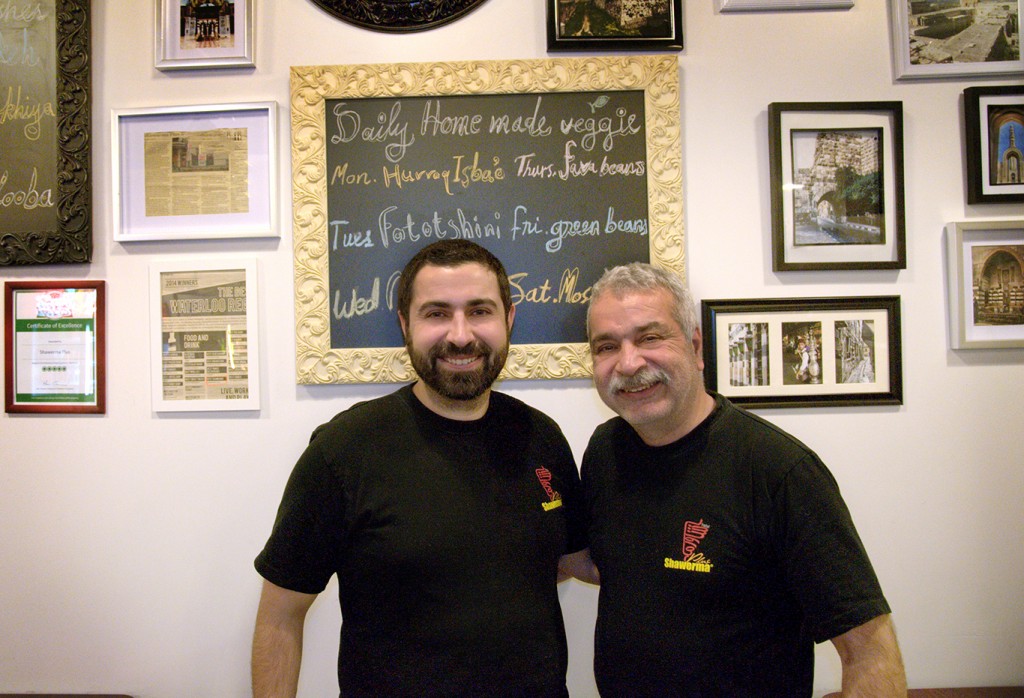 Jawad’s and Asem Ghabra in their restaurant in Waterloo.

Media coverage of the arrival of Syrian refugees reflects our collective excitement, along with fear and uncertainty and anticipation. Yet the history of local refugee resettlement can ground us. Instead of asking, “how will we do it?” we can consider, instead, “how have we been doing it?”

People fled to Canada long before the label “refugee” became a legal way of categorizing those in need. Unless you are indigenous, you or your family arrived and had to integrate in some way. Often, this resettlement work is informally shouldered by those who once made a similar transition. Many of those unofficial settlement workers assisted others simply by being members of a community: by stepping in to translate because they knew the language, by helping find employment, by explaining the bus system, or where to find the best injera.

Shamrose for Syrian Culture has been doing this work for years. “We try to build bridges here,” says co-founder Tamer Jabbour, who immigrated in 2005. Shamrose raises awareness about the Syrian conflict and culture, while helping establish newcomers. They run a children’s Arabic language school at Trinity United Church, and fundraise to support the relief work of Mennonite Central Committee, a partner of theirs since the group’s beginning in 2012.
Helen Ala Rashi, co-founder of Shamrose, also supports refugees through The Working Centre and Mennonite Coalition for Refugee Support. She estimates that volunteer interest tripled after the photo of Alayn Kurdi made international headlines. “It seemed overnight everybody wanted to get involved,” she said.

Ala Rashi knows from her own experiences that competent translators are a key element in the settlement process, and says the language barrier negatively affected her mental health and ability to integrate. She did not speak English and had no translation support when she arrived 11 years ago, during the last few weeks of her pregnancy. She couldn’t go to English school until her newborn was 18 months old, and isolation during the transition quickly led to depression. “But I was lucky,” she recalls, “I was connected with the Early Years Centre where I could volunteer five days a week with my baby. I was always thankful for this place to allow me to volunteer without English.”

Shamrose provides translation training sessions for Arabic speakers. “We train for confidentiality,” Ala Rashi explains, emphasizing that it is important for translators to know “how to control yourself, especially when providing sensitive health information, and expressing beliefs.”

The organization also has a matching program for anyone wanting to get involved. Young families are matched with other young families, with whom they periodically meet to shop at the market, play soccer in the park, cook dinner, or study. 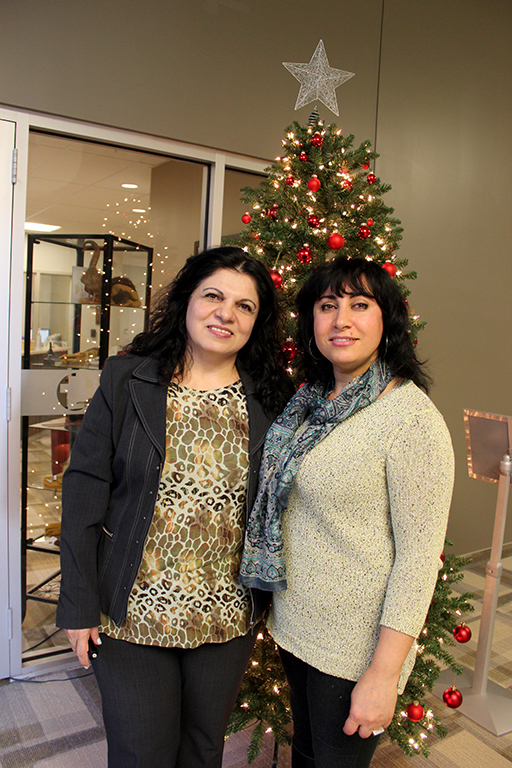 Many new refugee families will also need help getting around the city. Accessible transit currently comes in the form of subsidized bus passes, for which many wait six to 18 months. “You have all these services existing in the community: food hamper programs, employment services, housing. [But] if I don’t have transportation, how do I access them?” Ala Rashi asked rhetorically, reiterating that “the best thing would be for the Region of Waterloo to give a bus pass for the first three months at least.”

Access to subsidized transportation is a problem for many people living on a low income—refugee or not—and there are other challenges relating to resettlement that are not exclusively resettlement problems. For example, the influx of refugees has seemingly prioritized public conversations about our significant lack of safe affordable housing. As groups press for short-term housing for refugees, they could make our cities healthier in the long-term.

Our community commitment to settlement has brought other, less material, incidental benefits. “We all have different networks, backgrounds and viewpoints to contribute. And we were able to put these together for a common cause that we all believe in,” says Laura VanderGriendt, who with her husband organized a sponsorship group. “We intentionally wanted to bring together people from different aspects of our lives,” says her partner, Curtis. “It forced us to think intentionally through values and motivations as a group,” she added. Ghabra’s sponsoring group includes local academics, businesspeople, and the mayors of Kitchener and Waterloo. “It’s an awesome group,” he says.

“Unfortunately Syria can’t be home today. It’s only in our hearts and memories. But we don’t give up,” says Ghabra. Indeed, home is worth working towards. “You can’t do everything. But you can do something,” he says. Perhaps the new year will open a new chapter, where diverse, active, and engaged communities foster a home where all are welcome. 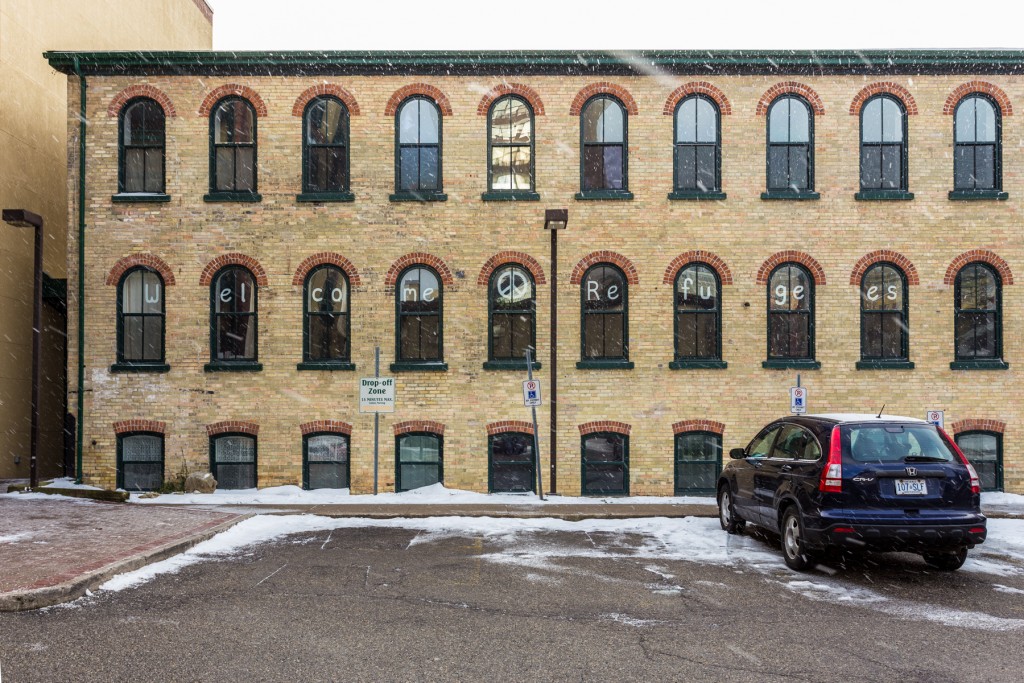 After a few residents at Bread and Roses Co-Operative Homes shared these welcoming words, the Co-Op decided to reserve an empty apartment for a refugee family in 2016.