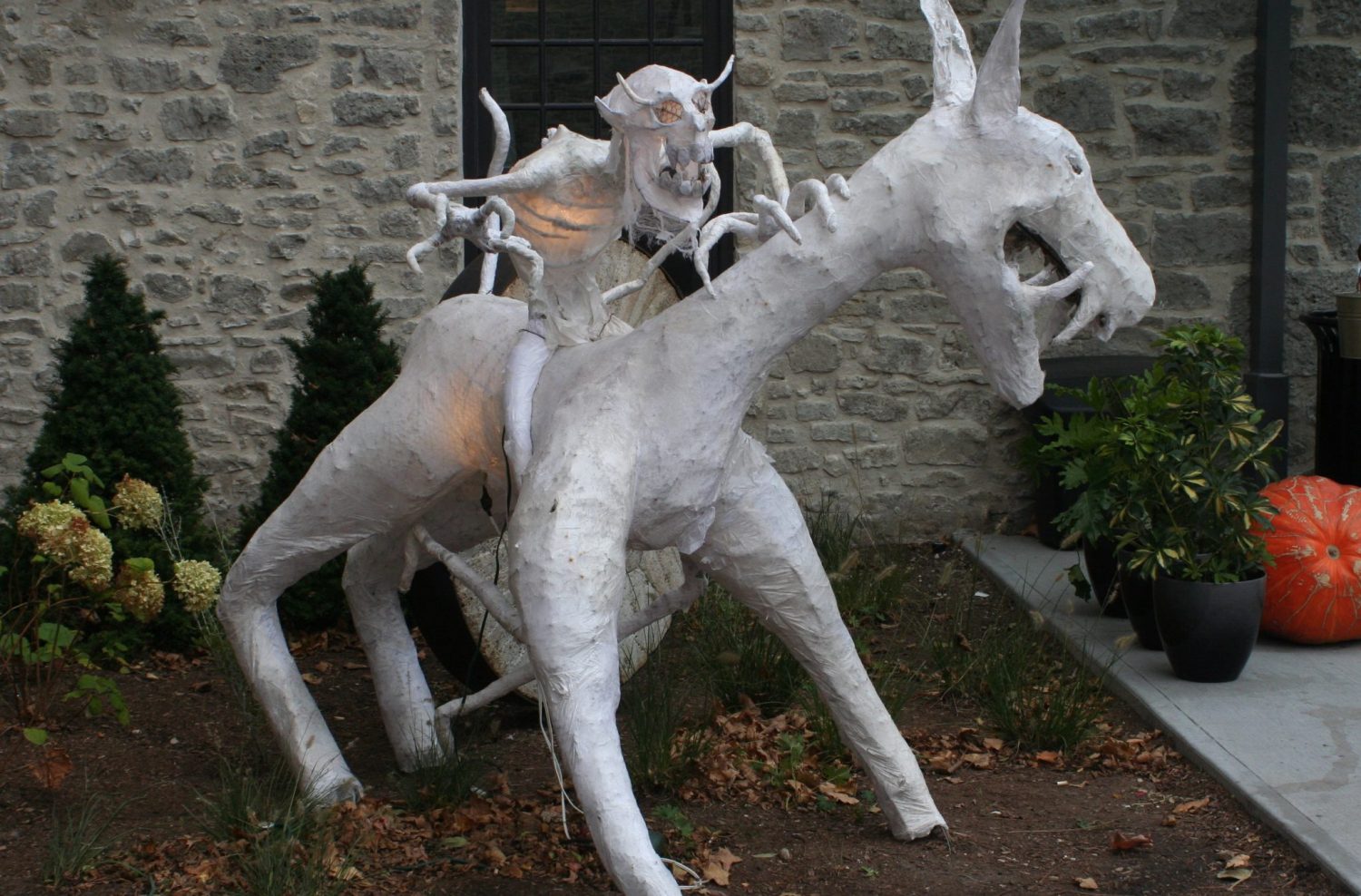 Here is October, with its early and suddenly dark evenings. Throw in the rustle of dry leaves and glossy shadows after an autumn rain, and the elements create a perfect atmosphere for Elora’s Twilight Zoo and Monster Month.

Every night during the month of October, the Twilight Zoo decorates the streets of downtown Elora with a sculpture collection of illuminated phantoms, ghouls and creatures. An avian beast with giant talons perches outside a shop door. Fiendish monsters with animal heads and forked tails dance around a cauldron in an open green space.

Witches, and maybe a few warlocks, hide under mushrooms the size of large leaf bags and a creepy spider peeks over the edge of a rooftop, waiting to pounce on an unsuspecting victim.

More than anything, the glowing forms made of wire, papier mâché, gauze and glue cast a whimsical, magical stage to explore a town known for its artistic community. Only 30 minutes north of Kitchener-Waterloo and 50 minutes from Cambridge, Elora is your October destination for an evening or weekend of monster-y fun.

The Twilight Zoo is the work of artist Tim Murton, an Elora resident who grew up in England. What began as a few “lantern sculpture” creatures in 2002, grew to become a collection of 140 pieces, large and small, by 2017. As the sculpture collection expanded, so too did a series of events hosted by local organizations, prompting what is now known as “Monster Month.”

In 2015, Sensational Elora, a local festival non-profit, assumed responsibility for organizing the Monster March, which took place at the end of the month. When Murton no longer wanted to organize the Twilight Zoo, Sensational Elora raised enough funds to purchase the entire collection so that it would stay in Elora where it is loved. They now host the volunteer committee that organizes Monster Month.

Most popular of the Monster Month events is the non-motorized Monster March Parade. It’s easy for anyone to participate; all it requires is a creative costume and a group of friends to venture out with on a Saturday night.

Last year’s Monster March Parade kicked off with superheroes rappelling from a downtown Elora building spire. McElwain is planning for another parade surprise this year but won’t reveal the secret.

“I guess you’ll just have to be there,” he said.

The month of monsters also includes several nighttime lantern walks in Elora and Fergus, a charity ‘Soup-Off,’ a magician’s show, psychic readings and Monster Mash, the post-parade Halloween party at the Legion.

Restaurants and area merchants are part of the action too, as many offer themed events or specials. Every monster detail is listed on a dedicated website, www.monstermonth.ca.

Art should never be confined only to galleries and museums, nor should it be so precious that monsters and ghouls can’t be considered as art. Elora’s Twilight Zoo proves that papier mâché skeletons, spiders and a trippy mushroom forest are much loved art because it is connected to the place where it was created and lives on every year in its own special outdoor exhibit.