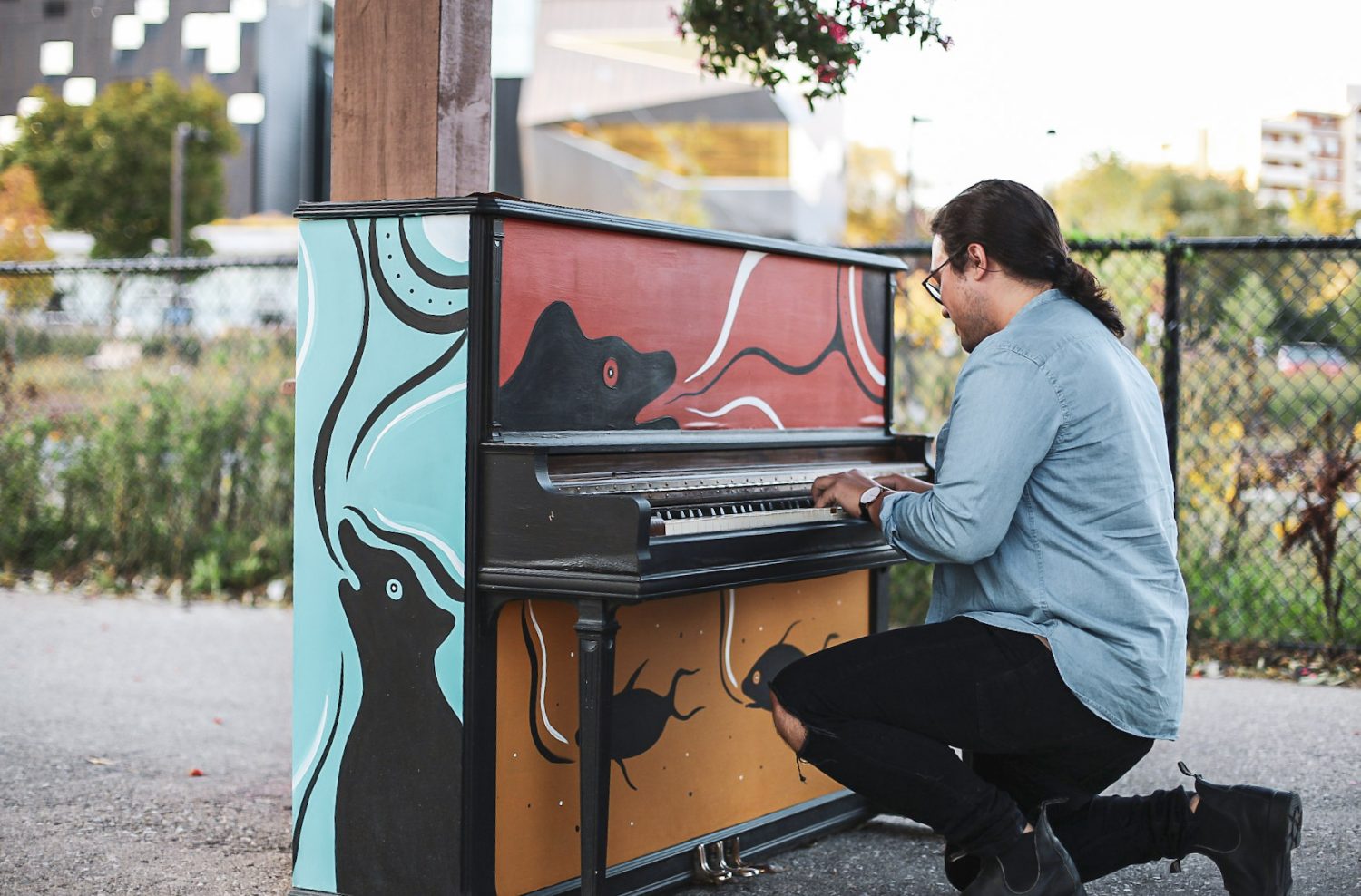 The Side Hustle: Luke Swinson

You may have noticed Kitchener-Waterloo beaming with a little more colour and culture as of late, thanks to several local artists, Luke Swinson (@lukeswinsonart) being one of them. As a full-time freelance digital illustrator, Swinson is intrinsically driven by his artistic passions, which are largely inspired by traditional Anishinaabe art.

Increasingly, opportunities to share these expressions with the greater community have presented themselves outside of his graphic illustrating career, and Swinson has invested a very personal energy into creating public art.

“The last five years or so, I’ve been really focused on reclaiming my own Anishinaabe culture – learning, exploring – and the easiest way for me to do that is through my art,” Swinson explained.

“Growing up, I was always inspired by Indigenous artists – specifically their Woodland art. Adapting my art to mimic that style has allowed me to feel much closer to my heritage. I’m learning more and more about it every day and I want to share that with everyone. This is the way that I know how.” 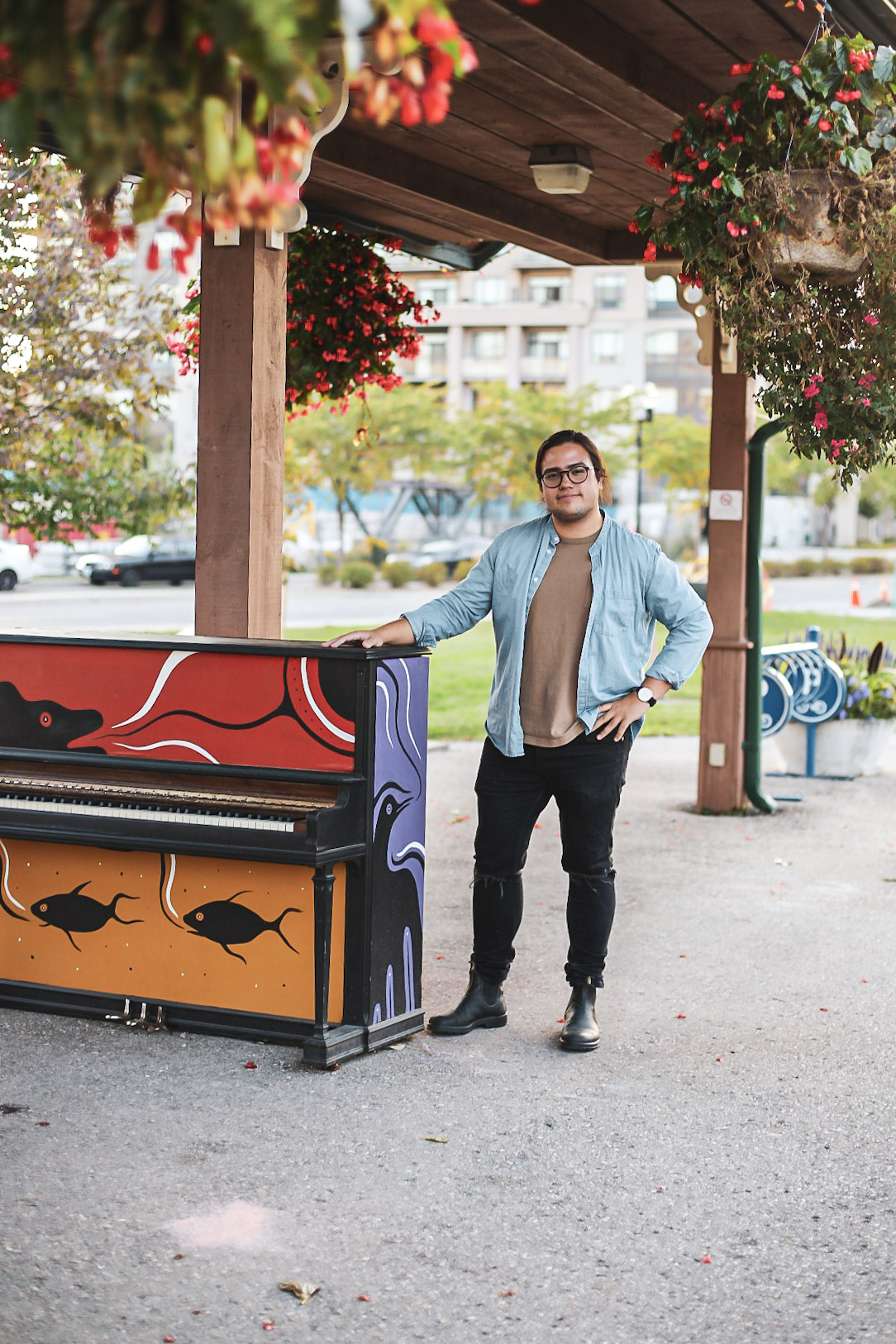 Given the chance to take on projects outside of his day-to-day work such as the National Indigenous Day mural in Waterloo Public Square, painting the public piano located outside of the old Waterloo train station, and various others, Swinson seizes each one with ambition and curiosity – learning about his culture and exploring different mediums along the way. He’s even had the experience of being a live muralist at a tech event.

Pushing himself to paint more frequently has been a rewarding challenge inspired by his familial connection to the craft. Not only is Swinson’s father an artist – whom he has learned a great deal from – he is also eager to experiment with the medium as it is one most commonly practiced with his Anishinaabe culture.

“A lot of people look at my artwork and wonder what it means. Some of them do have more abstract meanings, but most of them are so literal. For example, the National Indigenous Day mural my Dad and I did in uptown last year was an otter, and it’s called ‘nigig’ which means otter in our language … that’s sort of reflective of the level of education I have of Anishinaabe culture right now,” Swinson added.

Swinson went to Sheridan College for digital art, where he took a fundamental art class which classically trained him in hands-on mediums, like painting.

“Painting isn’t really my thing naturally, but when I do paint, it just works out to be a totally different style than I produce digitally. I’ve come to like both [styles] equally, and they complement each other so well,” he said.

Swinson also noted that as of right now, he is focused on seeking opportunities to collaborate with other artists, as well as with local arts and culture organizations such as Create Waterloo, who have provided him with a lot of the opportunities he has come across so far.

As a freelancer, Swinson has the flexibility to create his own hours, which now determines his availability to take on public art projects on the side, as well.

“It requires a lot of self-motivation, which in all honesty, is something I struggle with at times. I think everybody does. My advice is to try to accept jobs that you are honestly passionate about, as much as you can. Continue to work towards getting to a place where you can be selective about what you do,” he said.

“It would be nice if eventually my public art became less of a side hustle and more equal with my digital illustration. I would love to see them become less separate than they are, and I hope they will begin to overlap in time.”