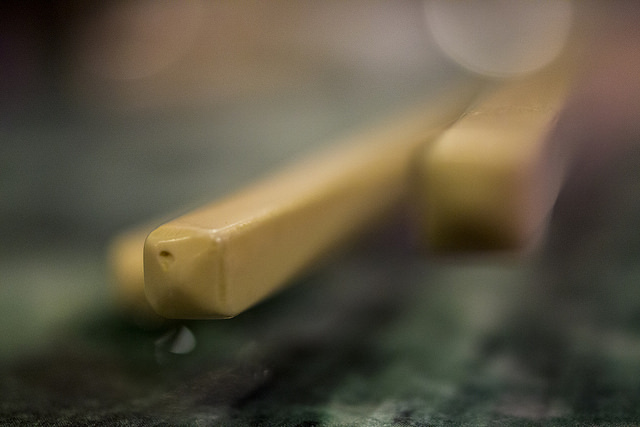 I’ll admit, I was a little skeptical before trying Hungry Ninja. I love burritos, and I love sushi, but sushi burritos? Are these really worlds that can collide into something palatable?

Hungry Ninja is located in an old house on Regina St. that has been split into two businesses. The south half of the building hosts The Unravelled Self, a haven where you can fulfill your “gyrotonic” exercise needs (which  I’m almost positive does not involve gyros).

The interior of the north side of the building could generously be described as minimal; you’ll find two DIY wood bars painted green against each wall of the room with about five chairs for enjoying your fare. This set up definitely leans toward the take out crowd, and I wouldn’t recommend it for your next romantic date night out.

A very friendly employee helpfully walked us through the menu. The two main options are your first decision point: sushi burrito or sushi bowl?

The sushi burrito replaces the typical tortilla with seaweed, akin to a large uncut sushi roll, while the bowl piles the ingredients on top of rice, with shredded seaweed on top. Each comes with rice and a few standard items such as avocado, cucumber, pickled ginger and tempura bits.

Next up, you choose your filling – we were told that the shrimp tempura and ahi tuna are favorites – with an enticing signature sauce. My husband chose the ahi tuna bowl with sesame vinaigrette ($12) and I chose the veggie tempura with spicy miso ($11). My husband was also pretty excited to have a hard-to-find Cherry Coke.

We waited just a short time for our food to be prepared, a lucky occurrence as I was approaching the hangry zone when we arrived. (I may have run to the counter once our food was called out.)

My husband’s sushi bowl had great flavors. The ahi tuna was nicely prepared and the sesame dressing accented the tuna very well. The tempura bits and shredded seaweed added a nice crunch and flavor to the bowl. I was worried my sushi burrito would just taste like a giant piece of sushi, but it was more on the side of burrito with sushi flavors. The rice and tempura were good, but what really knocked this burrito out of the park was the spicy miso sauce. I can’t believe I don’t already own a bottle of this myself, and am a little sad thinking of all the food that I’ve eaten in the past that could have been enhanced by some spicy miso.

I will definitely be returning to try some of the other flavour offerings, and recommend this as a good place to grab lunch uptown.