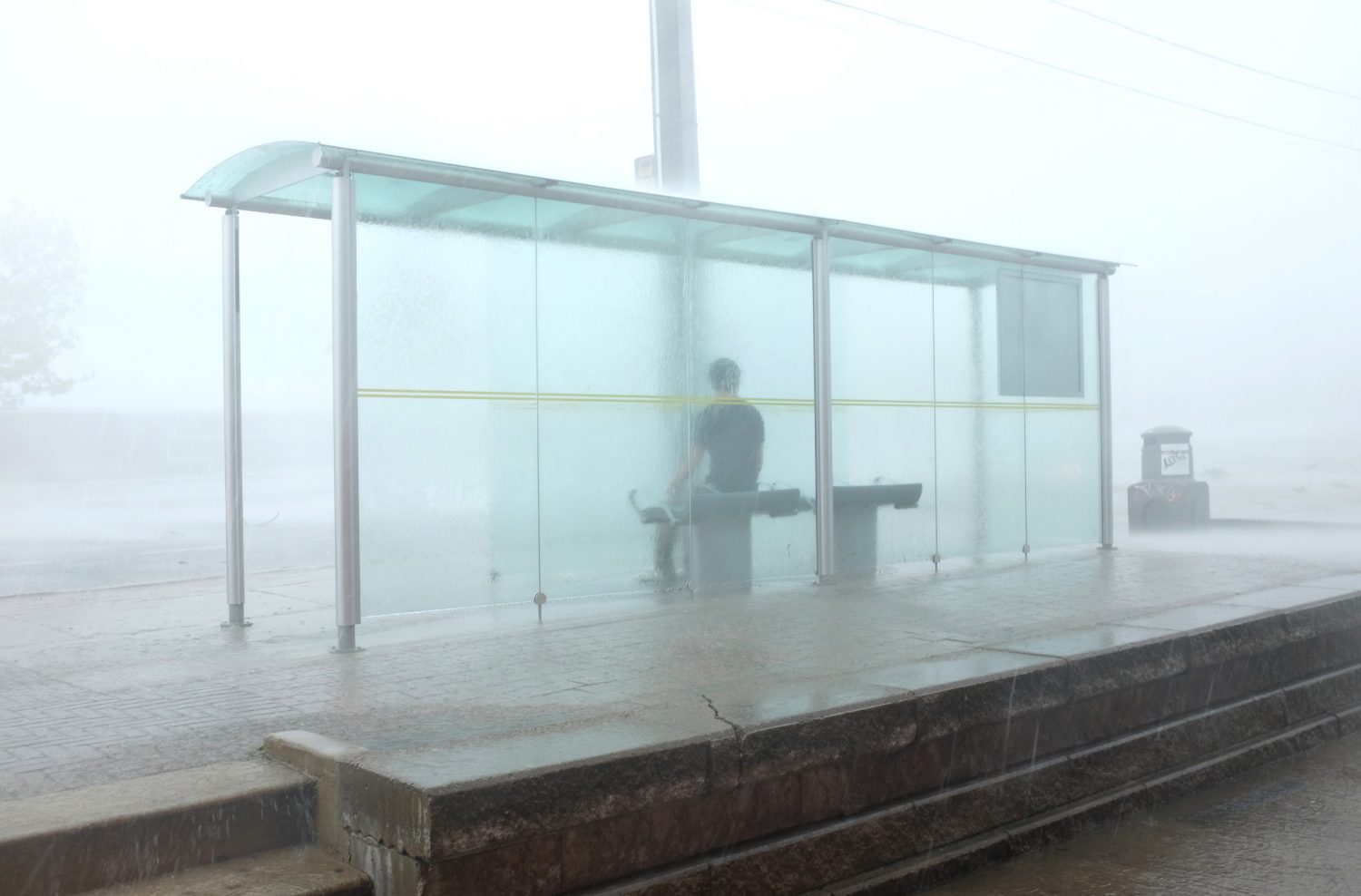 A Waterloo resident waits out the July 19 storm at a bus shelter at King St. and University St. Weather experts advise that this could be the new normal. • NICK LACHANCE CCE CONTRIBUTOR

With wild weather becoming the new normal, Waterloo organizations are trying to get people prepared

While the city continues to tend to the damages and tidy the mess that July 19’s storm pitched upon Kitchener-Waterloo, we have to wonder how long it will be until the next big weather event demands a similar response.
Paul Parker, a professor of Environmental Management at the University of Waterloo, suggests that it’s not far off.

“We always like to start by saying one storm does not prove anything,” he said. “But if you look at the trend over time, we are seeing the increased frequency and increased intensity that was predicted by climate change models.”

This emerging pattern calls for community action in order to both prevent and adapt to the inevitable.
“It stands to reason that if a one in 20 year event becomes a one in two year event, we plan for it differently,” said Johanna Wandel, a professor of Environmental Management at the University of Waterloo who specifies in areas of adaption. “We have to consider flood and storm water management.”

David Roewade is the current environmental sustainability planner with the Region of Waterloo and has overseen the funding of several initiatives within the region that work towards the management of excessive rainfall.
“The Region works with the three cities around storm water management plans because, as we saw with recent storms, they put a lot of pressure on storm water systems and there has to be changes made to the size of culverts and certain sewer piping to handle that kind of water,” said Roewade.

REEP Green Solutions, a local environmental non-profit, commenced their RAIN Program last year with aid from the local environmental action fund through the City of Kitchener. This program encourages the community to assist in reducing pollutants from entering Ontario’s lakes and rivers via storm sewers, while improving quality of storm water flow and limiting quantity.

This program assists homeowners with the modification of their homes and gardens to allow the capture of storm water and prevention of system overflow.

“That’s the challenge with climate change; what we saw recently with these storms is that there can be a lot of rain in a very short period of time,” said Roewade. “That overflows the system so if we have a way to manage what we do if a lot of it does fall then the damage can be lessened significantly. And it has the further benefit of conserving water.”

Roewade also suggested that an evaluation of the health and location of trees around the area should be conducted in order to prevent the damage to power and properties that took place during last Friday’s storm.
“[The storm] raises issues of how power lines or communication lines and structures like buildings and garages are in proximity to these large trees and large limbs,” he said. “It gives us an opportunity to learn from this and plan differently.”

Parker feels that it is not enough, however, to plan solely to adapt to increases in climate variability.
“The other option of course is to continue mitigation effects to slow down that rate of change,” he said. “So in other words we can take actions to reduce our carbon emissions and therefore change the steepness of that curve.”
Over the past five years, Sustainable Waterloo Region has been working with businesses across the area to advance their environmental sustainability and sequentially improve their performance. Sixty organizations, which make up 13 per cent of the workforce across Waterloo Region and occupy 16 million square feet of heated space, have collectively committed to reduce their carbon emissions by 45, 000 tons to date.

“It is critical for individual organizations that we increasingly respond to reducing the effects of climate change while at the same time adapting,” said Mike Morrice, founder and executive director of Sustainable Waterloo Region. “Because both those things are a better investment than simply paying to clean up afterwards.”
Both Morrice and Roewade sit on the steering committee of ClimateActionWR, a community action plan aiming to reduce carbon emissions within the greater Kitchener-Waterloo region by 2020. This plan has been in the making for four years and will be voted on by the city and regional councils later this fall.

“Whether it’s climate change mitigation, greenhouse gas mitigation or climate adaptation, you’re only going to really make a big difference with that kind of collaboration,” Roewade concluded. “You can bring in different perspectives, different expertise and work together towards broad solutions.”

Roewade does not believe, however, that such solutions are close at reach. “There is a lot more work to be done,” he said. “This is not a short term endeavor; obviously this is something we will have to chip away at over time.”