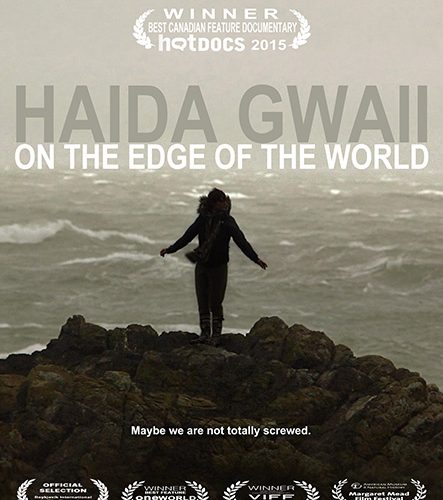 Haida Gwaii: On the Edge of the World is a breath of fresh, ocean air. The film is alternatingly passionate, peaceful and brutally honest, sometimes in a matter of minutes.

Directed by Charles Wilkinson, this Canadian documentary looks closely at the people, land, and history of Haida Gwaii. The island, known to many by its prior colonial name, the Queen Charlotte Islands, is 160 kilometres off the coast of British Columbia. The film presents Haida Gwaii as a microcosm of how the world could be.

The Haida have lived in this archipelago for over 13,000 years. Despite colonial attempts to shrink their land-base and to culturally assimilate them, the film illustrates how they have endured and flourished on the islands, where they still outnumber non-Haida residents.

The Haida believe that the land cannot be owned.

In the film, the Haida explain how they defend their land and their ways of life from those who threaten it. Citing a moral right to stop deforestation—on what grounds can we exploit what is not ours?—the Haida successfully blockaded logging trucks, and through their collective organizing were instrumental in the creation of Gwaii Hanaas, a National Park Reserve and Haida Heritage Site.

Since European colonists arrived on the Pacific coast, Haida Gwaii has been home to many confrontations: the documentary shows how many different people and groups have touched the archipelago, often with little regard for the Haida.

Haida residents explain their history throughout the film, describing how fur traders ravaged the Haida people with smallpox, and how the logging industry desolated the land of its trees. Starting in the 1920s, many Haida children were sent to residential schools as far away as Alaska.

So, while the Haida have shared in historical hardships characteristic of the colonial encounter, they have also worked extraordinarily hard to maintain their culture, and while many Haida remain connected to their history, they also continue to exist alongside and interact with the rest of us.

There is a Haida saying that “everything is connected to everything.” It’s easy to forget or to remain ignorant of the historical relationships between First Nations people and European settlers on Turtle Island. Wilkinson’s film creates a connection between the past and the present, and shows a part of our history that is often forgotten, but deserves to be remembered.