Every 13 Hours, An Opioid Death

A predictable and preventable crisis is unfolding before our eyes in Ontario, where one person dies every 13 hours from an opioid-related overdose. This crisis was the focus of a recent evening of programming at the Kitchener Public Library, where public health researchers, community mental health and addictions workers and documentarians gathered to educate and to open the minds and hearts of community members.

Violet Umanetz, a registered social service worker at Sanguen Health Centre hosted a free training on overdose prevention and intervention to start the evening. In her 40-minute workshop she shared about how to recognize the symptoms of, and respond to an opioid overdose, and handed out over 90 naloxone kits to participants. Naloxone temporarily reverses an opioid overdose.

Much of the rest of the evening focused on how future attempts to respond to this crisis should prioritize the lived experiences of people using drugs, and on the importance of de-stigmatizing drug use.

Larissa Ziesmann is currently a peer health worker at the Kitchener Downtown Community Health Centre, where she works closely with people struggling with their mental health and addictions. On the topic of stigma, Ziesmann, who abused opiates for 15 years, said that “we pass by people who may look a little more raggedy than we do and we have this instant judgement, [but] other people can feel that. If you saw me two years ago you would have no idea, I was a totally different person.”

“I could feel that [stigma], and it makes everything a little bit more difficult,” she added.

Ziesmann’s words were echoed by Allison Tierney, who produced the documentary DOPESICK that also screened at the KPL.

“This is the real moral deficiency related to drug use: It’s not necessarily those doing drugs; it’s those who judge someone’s use of substances without knowing what they’ve gone through in life.”

DOPESICK follows the lives of people in Alberta using and/or affected by bootleg fentanyls: a non-pharmaceutical, high-dose opioid that is being added into a variety of substances, often without the knowledge of the consumer. The documentary provides a glimpse into a world of substance use many of us hear about but never witness, and makes an alarming case for the ways our health care system and society discriminates against folks who use drugs.

Indeed, many have taken to calling bootleg fentanyl’s emergence a crisis within a crisis. In the days following the event at the KPL I talked with Michael Parkinson, from the Waterloo Region Crime Prevention Council.

“In Ontario there’s been more than 7,000 opioid deaths in 15 years. SARS had 44 deaths across Canada total and the response was so different. Anaphylaxis [has caused] 92 deaths in 25 years in Ontario. And it’s still a struggle to get Naloxone distributed. Epinephrine [is] no problem,” said Parkinson. 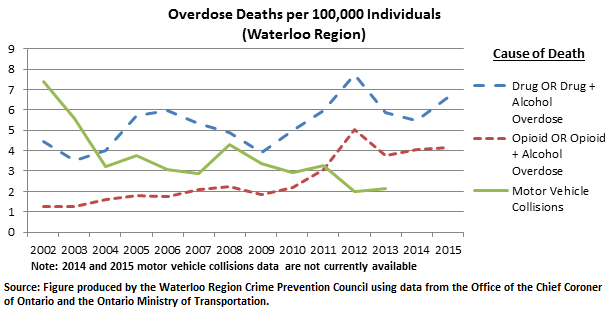 “It’s a crisis not a spectator sport, and despite the words like emergency and crisis and epidemic being thrown around the response has been anything but,” Parkinson added, before wondering aloud why it’s being left to politicians without any training in health or medicine to make the kinds of decisions that they do around policies and programs.

Tierney said that childhood trauma is a major root cause of addiction, and that part of the reason why we have problems with addiction in our society is our lack of mental health care.

Gabor Mate, a retired physician who worked in Vancouver’s downtown eastside, has also written about how opioids soothe pain — and so are especially attractive to someone who has suffered childhood trauma.

Here Ziesmann added that, while “treatment is necessary, less wait times is definitely necessary but housing as well, you cannot be expected to make it for an appointment if you aren’t housed – if your appointment is a two month wait when you are on the street: good luck.”

What else do we need to do as a community, and what is necessary to combat society’s own addiction of looking down on those in the margins?

Of course, the next steps are really up to you. Those I spoke with suggest moving forward with harm reduction training at schools and workplaces. Write to your local politicians saying you’re cool with having safe injection sites and harm reduction programs in your community. There’s a lot of stigma, and it needs to be addressed publicly. We need to start seeing naloxone in bars, nightclubs, and concert venues. It should be in first aid kits. Obviously controversial, legalizing drugs should improve their quality, and save some of those one-every-13-hours overdose victims. Finally, confront stereotypes when you hear people say nasty things about people who use drugs.