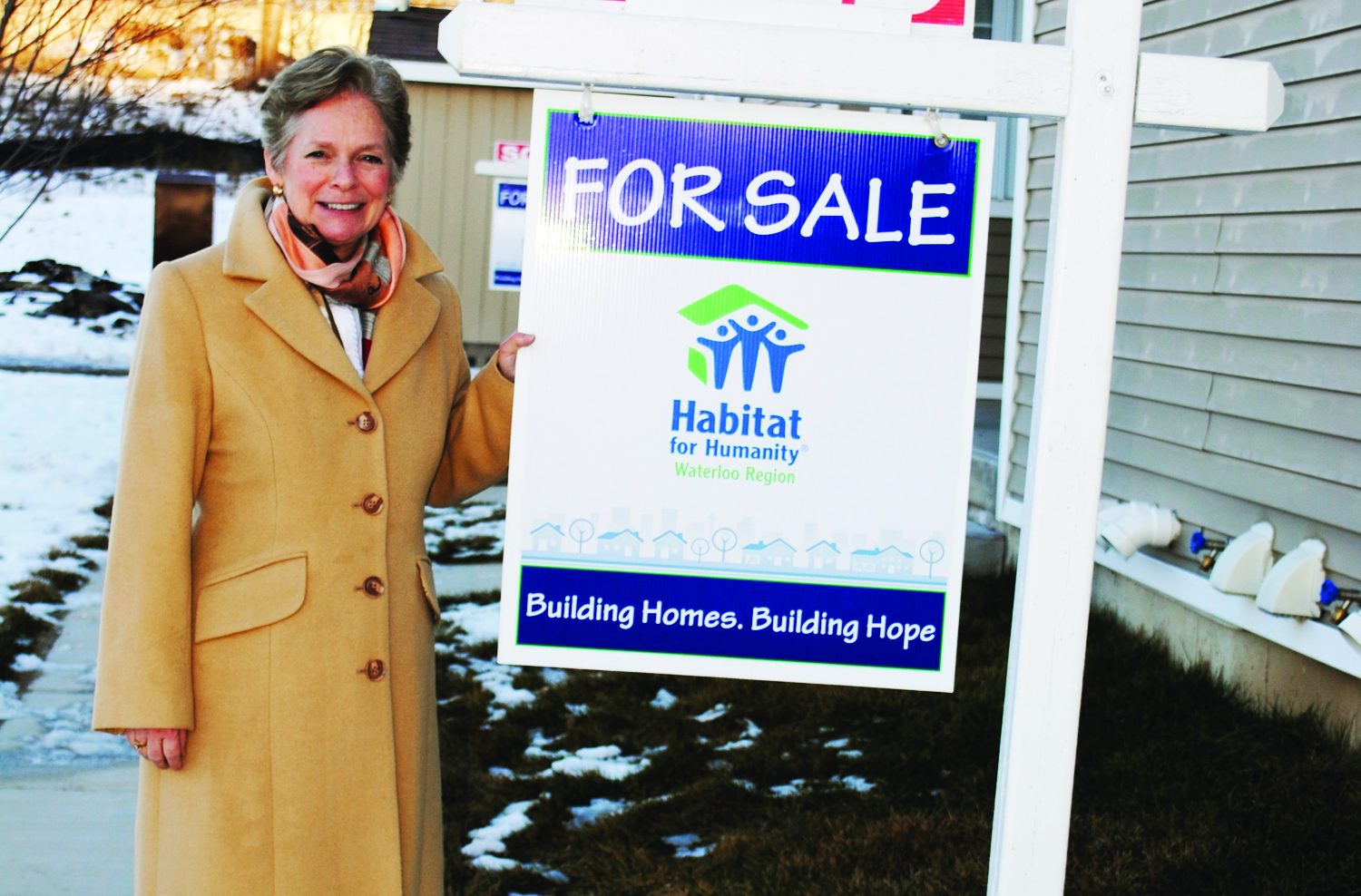 COMMUNITY CONVERSATIONS with Habitat for Humanity for Waterloo Region

Habitat for Humanity Chief Operating Officer Karen Redman stands with a sold sign at one of the townhomes built by the organization on Howe Drive in Kitchener.
• PHOTO BY HELEN HALL/KITCHENER CITIZEN

As the local chapter of Habitat for Humanity gets set to celebrate a pair of milestones, Kitchener Citizen Editor Helen Hall catches up with chief operating officer Karen Redman

This year is a big one for Habitat for Humanity of Waterloo Region.

Not only will it celebrate its 25th anniversary and build its 100th home, but it also has a very well-known face guiding it.

Former Kitchener Centre MP Karen Redman took over as chief operating officer of the charity in April 2012 when former executive director Ken Freeman had to take a leave for health reasons. He officially resigned earlier in January and Redman has agreed to stay until at least the end of 2013.

Habitat for Humanity is a nonprofit Christian ministry that believes everyone should have a decent, safe and affordable place to live. It builds homes for people in need regardless of race or religion. In lieu of a down payment, homeowners must put in “sweat equity” by helping with the construction of their home, and then must pay for the remainder of it through an interest-free mortgage with Habitat for Humanity.

Redman represented Kitchener federally from 1997 to 2008, and prior to that was involved in municipal politics and served on the school board. Following her defeat in 2008, she headed back to school to get her MA in political science.

“I decided to get some academic framework for what I had been living for the last 20 years.”

Former Wilfrid Laurier political scientist David Docherty, who is a friend of Redman’s, encouraged her to get her MA, joking that she had already “earned one on the street.”

Several political friends told her not to jump too quickly at offers she would receive to volunteer her services in the community, but to allow herself time to make a decision. However, Redman said yes “right away” when offered a seat on the Habitat for Humanity board in 2009.

“I’ve always been a huge fan of Habitat for Humanity,” Redman said in an interview. “I love their philosophy, I love the connection with the faith community. My faith has always been something that is deeply personal but very strong in my life, and this is such a manifestation of people caring for other people.”

Redman first worked with Habitat for Humanity many years ago on its very first “women’s build” where women were invited to volunteer their construction skills. The organization invites people from all walks of life to volunteer with the family that will be receiving the home during its construction. Many local businesses volunteer their employees for a day because they see not only the value in helping Habitat for Humanity, but also believe it is a positive team-building experience for those who participate.

Habitat is supported by corporate and private donations and by the funds it raises at the ReStore on Northfield Drive East in Waterloo.

The ReStore is a warehouse that sells donated construction items. Some are new and some previously used.

“I think Habitat for Humanity is so much like the old quilting bees,” Redman said. “Our community is so steeped in that Mennonite tradition. Everyone works together and makes small pieces, which don’t have value or as much value as when they are knit together.”

Redman said her only frustration is that some people are confused about what Habitat for Humanity does.

“The brand is strong but not always well understood,” she said. “We don’t give people homes, they earn their homes and they pay for them.”

Homeowners pay fair market value for their homes. The down payment comes from sweat equity, and the remainder is paid through an interest-free mortgage.

“We’re offering opportunity and we offering partnership with people, but we’re not giving away homes.”

Habitat will complete the final two townhomes on Howe Drive this summer, and will then begin construction on four units on Donley Street near Ottawa Street South and Kehl, including its 100th home. A huge block party is planned to celebrate the occasion.

“We obviously want to give people a decent place to live that has all the things we all want in a home, but at an affordable rate. To do that we found that the townhome was the model that would work in Waterloo Region,” she said of Habitat’s move from building single detached homes to townhouses. Celebrations are being planned during the next year to mark the organization’s 25th anniversary.

A gala is scheduled for October, but the exact date has not yet been set as they are waiting to hear if Governor General David Johnston can come. Johnston is from Waterloo Region and is the former president of the University of Waterloo. The gala will also feature the display of some unique art.

Habitat for Humanity has invited ten artists to choose up to $100 worth of material from the ReStore to make a piece of art. These items will be on display at the Habitat’s annual general meeting on Feb. 13, which is being held at the Restore, and will be up for auction until the gala in the fall. They are also hoping to have them displayed online for bidding.

While Redman is enjoying her time with Habitat for Humanity, she is not closing the door on returning to politics.

“It gets in your blood,” she said. “There’s still a draw there so I’m not ready at this point to publically say I’m not considering it,” she stated.