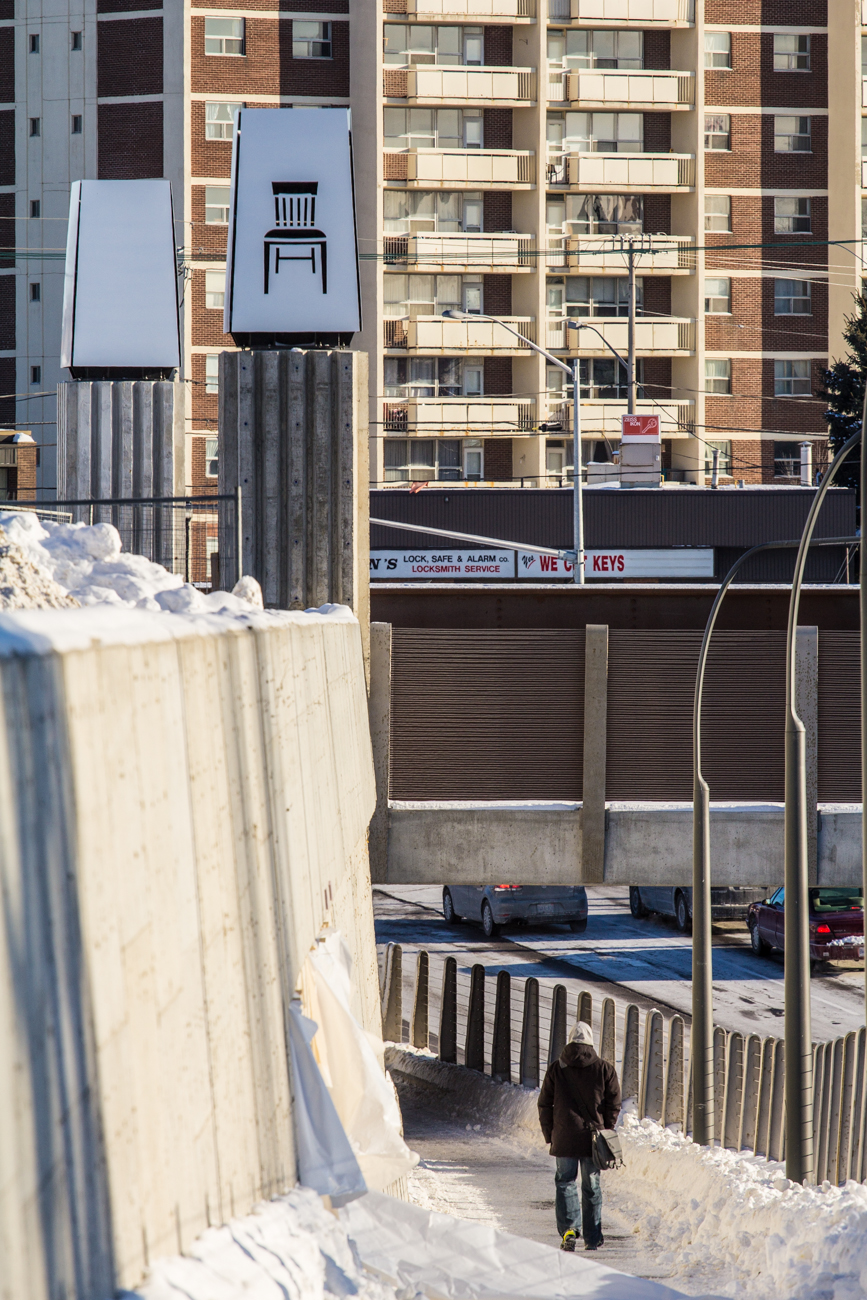 Summertime construction along Weber St. W. created more than a few headaches for drivers, as development teams built a new railway bridge in preparation of the King-Victoria Transit Hub. Now that the bridge is finished and the underpass is fully operational, four pylon-style gas lights have appeared atop the bridge, donned in art work representing the industrial heritage of the area. These pylons are part of a $600,000 public art project, implemented by the Region of Waterloo as part of its public art policy.

“The Region of Waterloo has a public art policy that applies to major projects like the Weber St. railway bridge,” explained Regional Councillor Tom Galloway. “A similar project is the Fairway Rd. bridge, if you’re familiar with it, which has $800,000 in architectural features.”

The Region of Waterloo Public Art Program was approved in 2002, during the construction of several major regional buildings. According to the Region of Waterloo website, “Regional Council agreed that public art enhances the positive perception of a community and raises its cultural profile.”

A public art reserve fund was created shortly after using money allocated annually at the discretion of Council. There is also a budgeted allocation from designated capital projects.

A variety of criteria have been set for public art projects, like the Weber St. railway bridge. Art must contain “aesthetic, historic or commemorative objects,” be of “high quality and unique,” and can be made up of “paintings, sketches, drawings, photographs, sculptures, carvings, metalwork, murals, crests, quilts, tapestries, special architectural and landscaping features.”

When projects are approved, the Public Art Advisory Committee appoints a jury to solicit proposals. For the Weber St. railway bridge, bids for the project were accepted from two studios in Toronto. The advisory committee is made up of one or two regional councillors, four community members representing the arts, education and the general public, a community services division representative, and a facilities management division representative. The jury must keep in mind “the unique characteristics of that site, judge submissions, choose the most appropriate and recommend it to the advisory committee.” Recommendations are presented and Regional Council makes the final decision.

“Whenever things are built, the region tries to ensure there is some public art on the property. For example, the region is currently taking bids through a studio competition to add art to the new county court house,” said Galloway.

In this case, the four gas light pylons, which can be seen atop the bridge, are only a small piece of the project. The fixtures will also be visible from entrances along Victoria and Breithaupt.

Each gas light pays homage to four of the sectors that set the foundation of Kitchener’s economy – food, clothing, luggage, and manufacturing.

“In addition, there will be larger elements at the pedestrian level along the underpass,” said Galloway. “There will be 3D fiber glass reinforced concrete panels, which will depict other industries from the past, such as the button industry.”

These architectural features add light and design to what would otherwise be a rather dreary looking piece of infrastructure.

If you drive by now, you’ll see that the western facing front of the railway bridge has been tagged with graffiti
– a task that Galloway says won’t be possible again now that construction has been completed.

“Yes, that happened while the bridge was still undergoing construction. People won’t be able to access those areas now that construction is complete.”

Galloway explained further that removal of graffiti is the responsibility of the contractor during construction and that the larger panels of art that are placed in the underpass will be coated with a sealer that will help with graffiti removal should any appear.

Kitchener is not known for having many underpasses, and when one is created there is always a conversation surrounding public safety. Galloway assures that the region is always looking for ways to make the city more pedestrian friendly.

“The underpass will be quite well lit. Already the railways and railings in the underpass contain elements that are decorative in nature to be more attractive to residents.”

The region’s public art policy and budget will extend somewhat to light rail station planning, as rail construction projects begin this summer. Galloway says that at this time it’s unknown whether that competition will be extended to local residents and neighbourhoods, or if they will go with a studio like they have in the past for projects like the Weber and Fairway bridges.

The large panels depicting parts of Kitchener’s industrial heritage will be installed in the next few weeks and will be available for viewing by mid March.

Anna believes in defying expectations when it comes to being a millennial that wears Raybans. She spends a lot of time wandering around town spending money she doesn’t have on things like tacos, coffee, and Moleskine notebooks. She will also walk your dog for free.