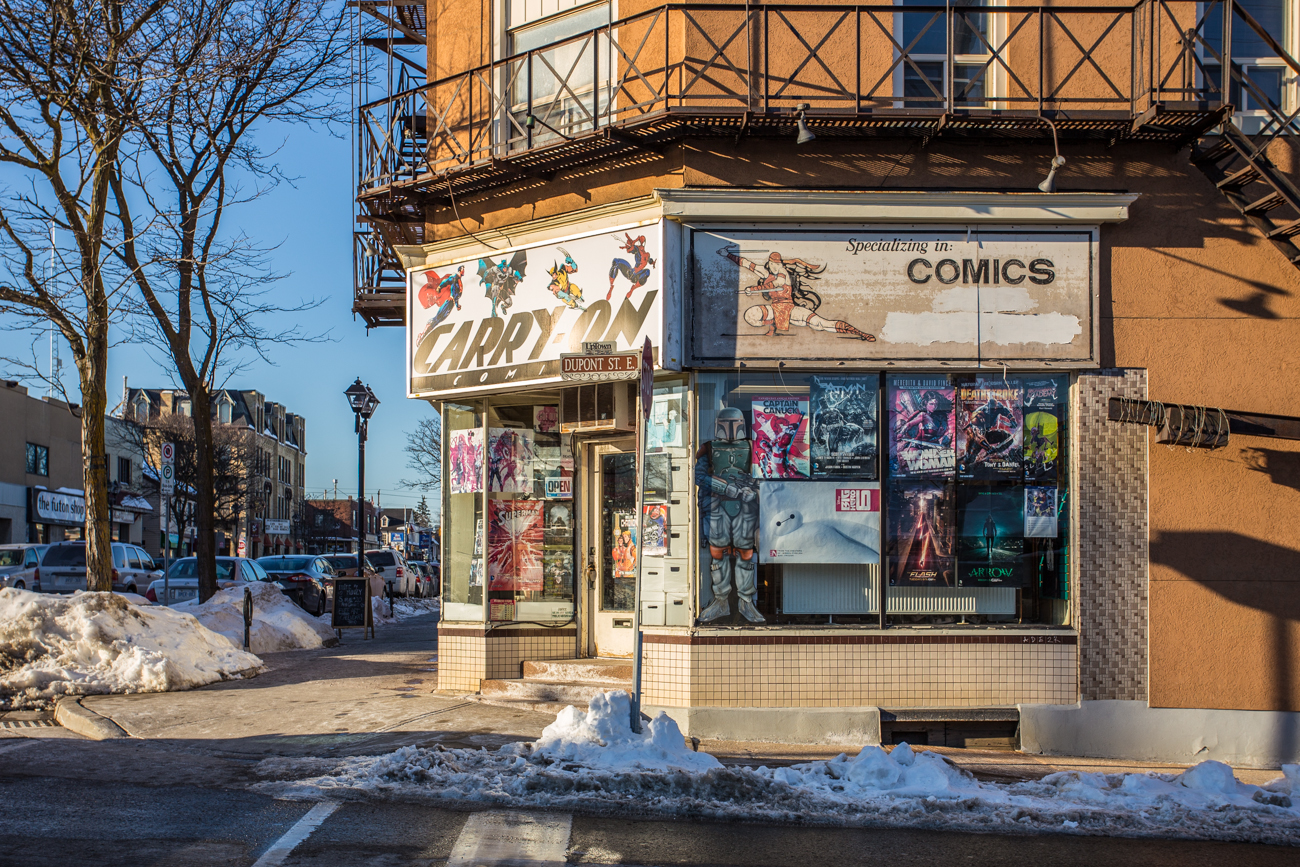 Andy Brast, owner of Carry-On Comics in uptown Waterloo, breaks away from our interview to greet two customers who have just walked through the door. They exchange greetings of familiarity while he catches up with them and instinctually reaches for their weekly haul of comics behind the counter. It’s a routine he’s done a hundred times in this cozy little comic shop.

Upon the walls of Carry-On is a diverse lot of goods to satisfy every level of comic book fan. Everything from the latest issues of The Walking Dead to graphic novels (paperback collections of individual issues) recounting the unforgettable adventures of pop culture mainstays, like Spiderman and Batman.

A fixture of the uptown landscape since 1980, Carry-On Comics was purchased by Brast in 1991 and he has owned and operated it ever since. But a lot has changed in the way consumers shop since Andy first took over the shop 11 years ago.

“When I first started you could sell anything. If you had it in the store somebody would come and buy it eventually. You could have posters, t-shirts, anything. You just had to have a little bit of selection,” he said. “Now it’s a little different because the business itself has shifted away from selling comics, memorabilia and other things like hockey cards. Now we sell graphics novels. Fifty percent of our business now is graphic novels.”

With more consumers adopting e-reading as an alternative each year, comic publishers have started offering digital versions of their material online. Comic powerhouse Marvel has even adopted the Netflix model, offering unlimited access to sections of their back catalog through subscription-based pricing.

When asked if this move toward a digital model affects his sales, Brast revealed that the exact opposite has been happening.

“We’ve actually gotten a few more sales because customers see it digitally and then came and bought the comic afterwards,” he explained. “I would say ninety-nine percent of the people who buy comics want to have the paper copy. We even have the odd person who comes in, who reads it on the Internet and says ‘Put me down for the series!’”

Brast believes that there is still value in having something tangible when evaluating whether or not to purchase.

“Customers don’t want to buy via the Internet and have it shipped to them not knowing what it looks [like] before it comes,” adds Brast. “I think the biggest thing is just being able to walk in and see the product. “

Local award-winning artist and comic writer, Scott Chantler, agrees that the shift to digital has yet to affect him.

“As others have said, rumours of the death of traditional media have been greatly exaggerated. It makes sense to be able to make books available in as many formats as readers want to read them in, but e-books make up only a tiny portion of my royalties. Maybe that will change in the future, but for right now, print is definitely still dominant.”

While Chantler prefers fans read however they’re most comfortable, he values the experience of paper.

“I don’t like the panel-by-panel “guided view” for ecomics, because the composition of the pages are meant to be meaningful, at least, if the artist is doing it correctly. They’re not storyboards for a film, after all.”

Carry-On customer, Jason Brodrecht, shares Chantler’s sentiments on the benefits of print storytelling. “While I definitely see the pros
to digital format in comics, for me, there’s nothing like turning pages in a storybook; to see and admire the detail that went into the art on paper,” he said. “Digital feels more like viewing pictures through glass in a museum. Look but don’t touch!”

“There’s also the display, the collection, the need to complete it and continue on. To share the beautiful covers with visitors to my home and completely ‘geek out’ on them about why I love this one or that one,” Brodrecht added.

Most of all, Brast attributes print comics’ continuing success to the traditional culture of reading books and the atmosphere his store curates.

“If you like comics, you like the physical aspect of the store, you like the people, it’s the one time you feel safe. Family, community; there’s so many different aspects that bring people in,” he explained.

It’s that sense of community that brings Brodrecht and many others back to the store each week.

“It’s an excellent place to meet and talk with new folks picking up their weekly stashes. If you see them reading something you’re interested in, you can ask them about it,” he said.

During the span of my interview with Brast, he breaks away many more times to engage with customers passing through his door. He’s always engaged, aware and ready to give advice on the next best read. When I recognize a few of the customers from my own weekly pilgrimages to the store, I smile and nod with acknowledgement. It’s part of the experience and charm of this store – when you’re here, you know that you share a common bond with everyone in the room. Whether it’s a love of reading, art or collectible items, it’s this very bond, according to Brodrecht, that makes the comic book shop so important to the culture.

“If we lose that human aspect, the interaction with one another, the feeling of belonging because everyone in the shop is there because they love this stuff, then we may lose a piece of our identity as well.”

Carry-On Comics is located at 32 King St. North in Waterloo.

Kurtis enjoys many fine things in life such as tacos, records, and Batman. He’s always trying to do new things by getting out of that pesky comfort zone. He usually has a beard, and almost always has his adorable smiling dog Kinsey with him.