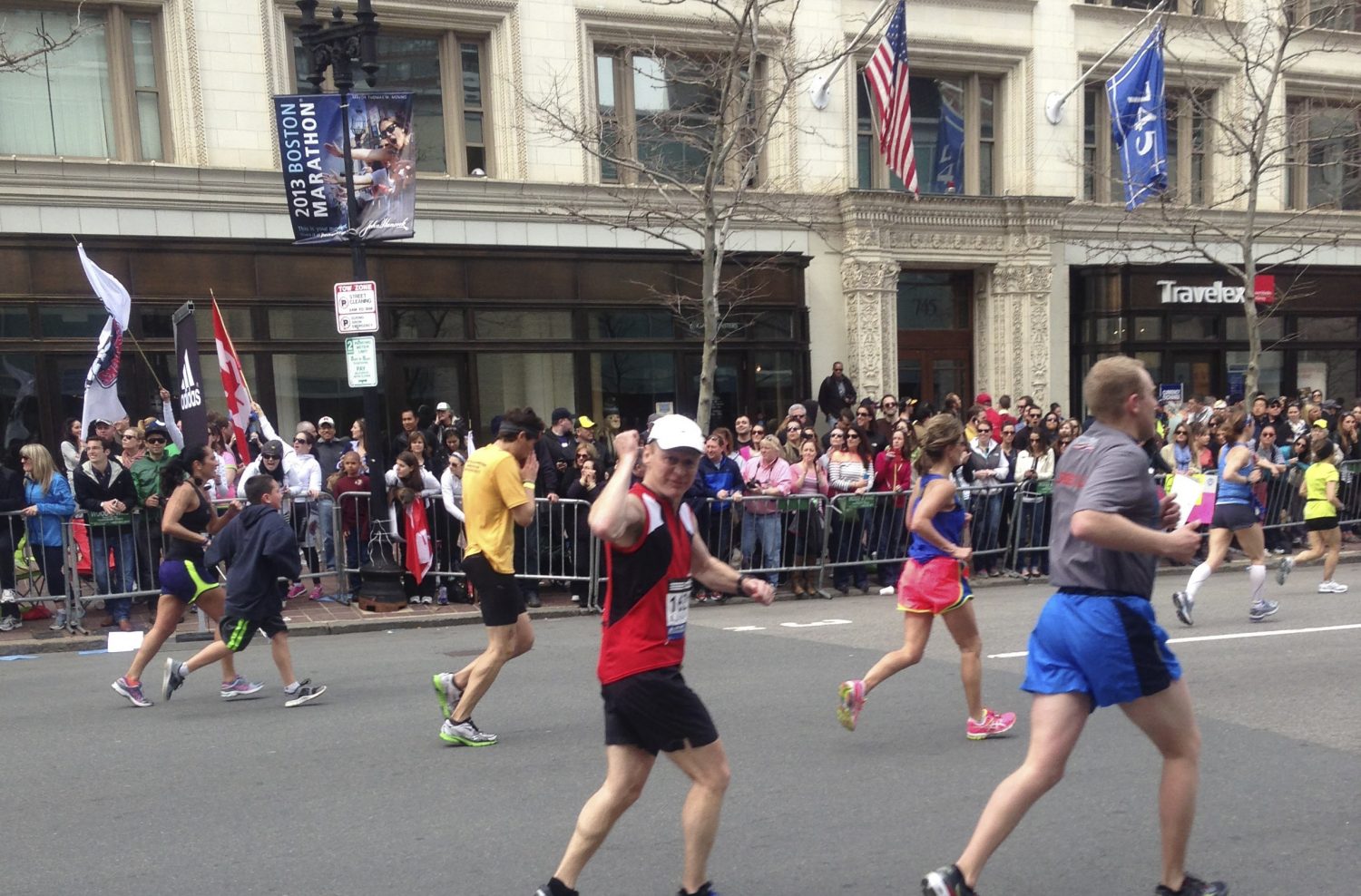 This photo was taken by Laurier student Meagan Suckling near the finish line of the Boston Marathon, about 10 minutes before the explosions that killed three and wounded over 250 went off. Suckling provided the photo to the FBI. • Photo courtesy Meagan Suckling

Local recounts the horror of this year’s Boston Marathon

Most people will always remember where they were April 15, 2013 when they heard that two bombs went off at the Boston Marathon. For Meagan Suckling, that memory will be particularly vivid.

Suckling, a masters student at Wilfrid Laurier University, had just watched her dad Peter cross the finish line on Boylston Street. 10 minutes later, she was walking in Copley Square on her way to meet her dad when she heard an explosion, followed quickly by a second.

“My first reaction was I thought it was maybe people setting off cannons because it was Patriot’s Day,” said Suckling. “People didn’t really panic until the second one went off… The second blast, it was really eerie after that. The whole city went quiet and people started to get panicky.”

Suckling and her mother had ran in the 5-kilometre run the day before the marathon. Her father was one of the thousands of runners taking part in the marathon. Just before the explosions that killed three — including an eight-year-old boy — and injured approximately 264, Suckling and her her mother had spent an hour right across the street from where the second explosion went off.

“We had an estimated time of when he [Suckling’s father] usually finishes and we usually show up about 20 minutes before that, but he was sick the three weeks prior to the marathon so his time was a lot slower than usual,” said Suckling. “So we were waiting there for a while.”

After hearing the explosions while walking through Copley Square, Suckling and her mother waited in the family meet up area, but her dad never arrived. After about 40 minutes, they realized that the runners were being diverted away from the meet up area.

Her father who, like so many of the runners that day, was without his cell phone during the race eventually called from Boston Common and the family met up at a statue of George Washington.

“It was a very long 40 minutes,” said Suckling. “There were rumours, you could here people talking about what it was. We were just trying to wait to see what it was and not freak ourselves out too much until we heard from him.”

Suckling recalls hearing rumours that there was a shooting at the finish line, or that a portion of the stands had collapsed, or that a speaker had blown. She could tell things were more serious when she started to see runners come to the family meet up area in tears. But it wasn’t until she got a text from her brother, who was still at school at Western University, that she heard there were reports of a terrorist attack.

However, some of the true horror of what happened didn’t really set in until Suckling got back to her hotel room and turned on the news coverage of the bombing.
“I did notice a rather potent smell in the air as I was walking back to the hotel,” said Suckling, noting how thankful she was that she didn’t have to witness the carnage at the finish line after the bombings.

“It wasn’t until after the reports that I realized it was the smell of burning flesh.”

Suckling and her parents spent a restless night in their hotel room watching news coverage, throwing around the idea of renting a car and getting out of Boston that night. The thought of what could have happened had Suckling’s father’s marathon time been slightly slower also started to set in.

The next day, the family left early for the flight, anticipating heavy security at Boston’s Logan Airport. But when they arrived the airport was largely deserted.

“It was eerie. I guess nobody wanted to fly out that day,” said Suckling.
After clearing security, Suckling’s father clad in his Boston Marathon jacket and medal, the family was stopped by the FBI asking for information. Suckling provided the one photo she had of her dad crossing the finish line.

“Now, it almost feels like it didn’t happen,” said Suckling. “I was nervous flying, but I was just really excited to get out of there and get back to Toronto
as quickly as I could.

“I wanted to see my boyfriend and my brother and my friends and just give everybody a big hug.”

Back in the safety of Waterloo, Suckling tried to jump back into her life, immersing herself in research for her impending major research paper proposal, while of course keeping a close watch on the news coverage following the situation as Dzhokhar and Tamerlan Tsarnaev were chased down by authorities.

However, being just over a week removed from what happened in Boston, the events have been understandably tough to put in the past.

“It seems extremely surreal at this point,” said Suckling. “I still get emotional about it sometimes seeing the people that have been so dramatically affected by it and thinking that I could have been one of those people.

“But I almost feel proud of the Boston law enforcement for everything that they’ve done and I kind of feel like I want to stay a part of it.”

After all this, would Suckling be willing to go back to Boston for next year’s marathon?
“Absolutely.”

“Boston’s amazing, the people are amazing and there’s a great sense of community,” she continued. “You can’t let something like this take away from what it truly is, a celebration of the runners.”