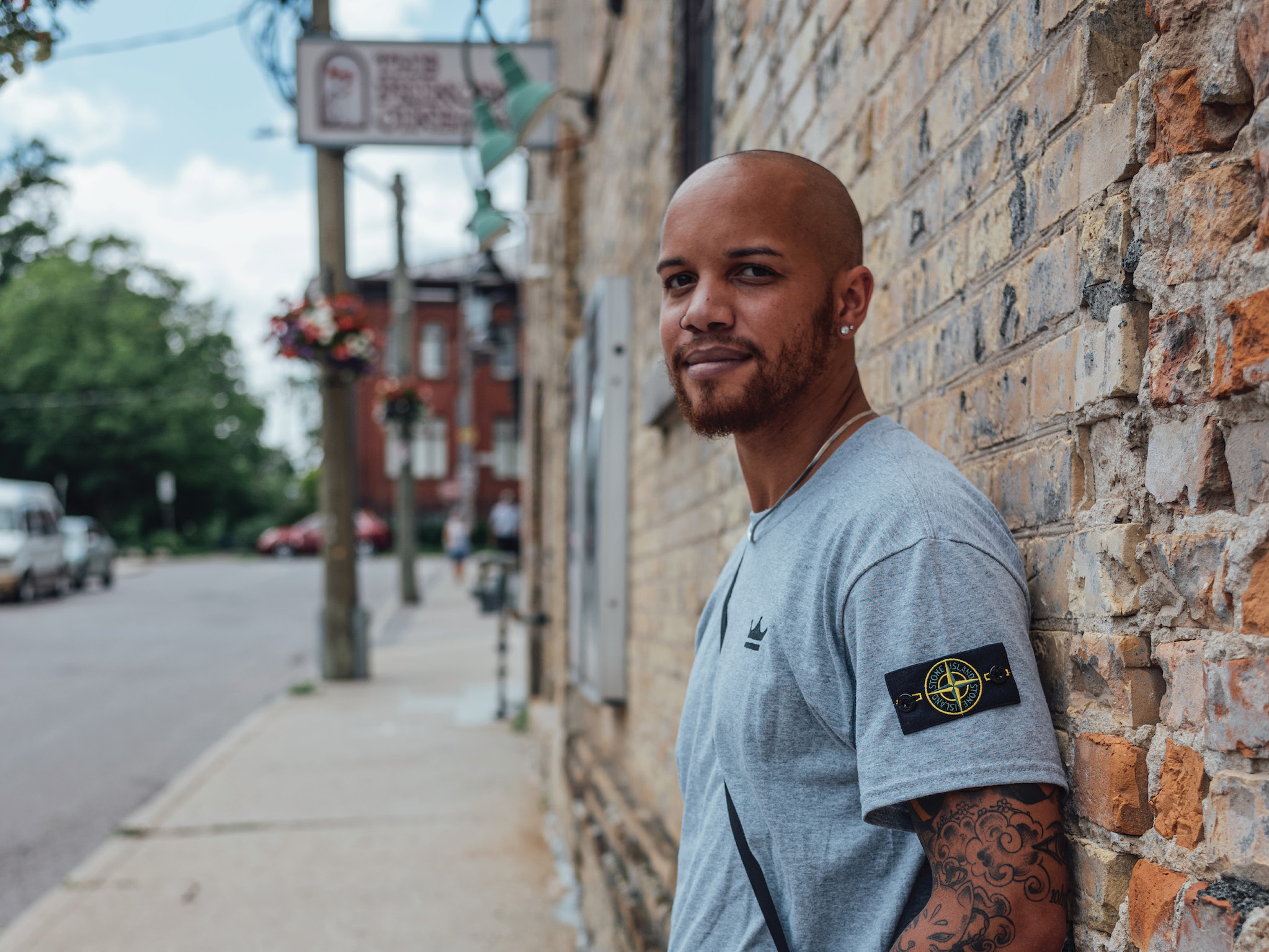 Abukar chose to not have his own photo taken but to elevate one of the local Black-owned businesses. The photo above is of Connor Bradley who created Essentixl Accessories. ERIK O'NEILL PHOTO

Faruk Abukar was born and raised in KW and has lived here his whole life. Growing up Black in KW, he didn’t see the kind of visual representation that Black youth require to feel they can succeed in a predominantly white community.

BIPOC, women and LGBTQ+ founders and entrepreneurs continually bump against the norms of the business world, which has long skewed to male and white — KW is no exception. Abukar aims to change that paradigm, and on June 9 he created an Instagram page called Black Owned KW to highlight local businesses that are Black-owned in the community.

“We really just want to grow the Black businesses in the community — by doing that we can make a drastic change in the landscape. A lot of people may not feel comfortable starting a business in the community but we want to change that,” Abukar said.

Within the first six days, his page hit 1000 followers. Black-led community organizations started liking and sharing and momentum grew quickly. With large local Black-owned businesses reaching out to collaborate, Abukar has exciting plans in the works.

“I see this being a collaborative effort with different members of the community to hold events, seminars and grow this project to not only businesses but also [show] …youth how to go about solo-preneur and entrepreneurship,” Abukar said.

According to Abukar, there are a lot of Black-owned businesses in KW that have been around for a long time that people aren’t familiar with. Although he’s lived here his whole life, he was unaware of what existed and was disappointed that he was not able to recognize and support them sooner.

“You see those staples you grew up with and unless you are shown or come across an advertisement or a friend refers you to another business, you don’t really know they exist,” he said.

Abukar believes that just one person can make a difference.

Growing up as a Black youth with East African parents, Abukar has experienced very different levels of visual representation in his community from public housing in Kitchener to the white-dominated suburbs in Waterloo.

“My experience has been everything from, everywhere I look it’s people that look like me, to [being] one of five other Black kids in high school. So for me specifically, especially with everything that’s been going on recently, and it’s nothing new but it’s just really out in the media for everyone to see, it’s definitely a time to say ‘hey eyes are on us, let’s start making some serious changes,” Abukar said.

He said that he brushed off a lot of the things his parents taught him about racism growing up, but he’s at an age now where he can look back and say that those conversations were serious.

“Those conversations are things that are being caught on video now. Whether it’s just an Instagram page or you’re out protesting, everything you do can have an impact on what I have to teach my kids down the line,” he said.

As a Black man, he’s personally experienced racism in our community and believes that others have as well, but that a lot of what happens locally is deflected to what’s going on across the border — that racism is an American problem. He says we need to address what is happening in Canada.

Abukar believes setting an example for the next generation can make a difference for Black youth growing up in our community. That’s why he started volunteering as a boxing coach for kids at the Waterloo Box Academy where he used to compete growing up.

“In KW as a black kid, you often can’t visualize what your future looks like because you are constantly looking at people that don’t look like you. If we don’t show kids visual representation, they won’t think that it’s for them,” he said.

Inspiring local kids is what keeps Abukar motivated to keep growing Black Owned KW. His goal is to get as much traction and visibility as possible on the Instagram page, especially for young Black students who are attending university locally.

“Black entrepreneurship is massive for the community. If they can visualize and see people that look like them that have these successful businesses then they can say ‘you know what, I can do the exact same thing,’” Abukar said.

Abukar believes that driving real systematic change will require more than just closing the gap to make things more equitable in our society.

“ …there also has to be an economic change and right now there’s such a disparity in economic power and wealth that we need to start spending money at home.”

“If I can buy something from KW I’ll buy it from a local business, but now more than ever is a time to say ‘hey is there a Black-owned business that I can buy it from?”

You can start by supporting Black Owned KW by going to the Instagram page here.