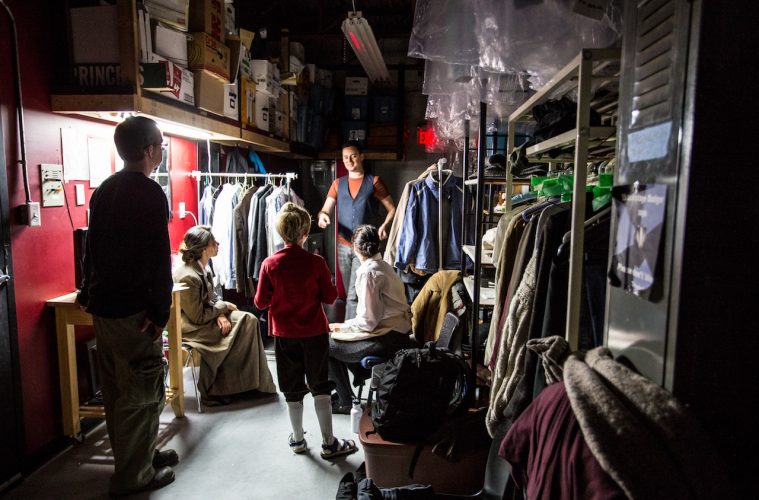 Behind the scenes at Kitchener-Waterloo Little Theatre

The Community Edition ventured backstage to bring you the performance behind the curtain at Kitchener-Waterloo Little Theatre. From rehearsal to opening night, the little space brings big-time heart to the Kitchener-Waterloo theatre scene.

Walking into the Kitchener-Waterloo Little Theatre – or KWLT as it’s more affectionately called – in Uptown Waterloo is a little bit like walking into the living room at Grandma’s house. With antique furniture and the scents of history and story telling in the air, it feels more like coming home then going to see a production. This month, I stopped in for a behind the scenes look at the theatre, as they did a tech run for this year’s holiday production, Yes Virginia, there is a Santa Claus.

The volunteer run theatre is small, as you would imagine with such a name as ‘little theatre’ but, what I found after spending the afternoon with Yes Virginia and her cast and crew, was my Nana was right when she said “the best things come in small packages.”

“Part of that home made, hand crafted feel comes from the theatre being a non-profit, 100 per cent volunteer run, and the rich history as well,” explained Elizabeth McFaul, producer for Yes Virginia. “We have actors who are in their first production and we have others who have been working with the theatre for 30+ years, and that’s where a lot of that community feeling comes
from.”

A cast of 14 members may not seem like many, especially when they are playing more than 50 roles during Yes Virginia, but in a tiny green room, these actors who range in age from 11-65, have learned the intricate dance of jumping over one another during costume and scene changes.

The green room at KWLT would liken to the storage room at Grandma’s, if compared to the living room like feeling of the theatre’s main foyer.

Costumes, jackets, and props hang from the ceiling. Storage lockers, and more antique furniture litter the floor. It’s in this back room where friendships seem to shine their true light and the camaraderie between cast members takes centre stage.

“This is a big cast for us and it can get a bit rowdy back here sometimes but, if you were to go and just sit in there during a production, you’ll make a handful of new best friends – everyone
is very welcoming,” said McFaul.

Yes Virginia is a production based off an editorial appearing in the Sept. 21, 1897 edition of the New York Sun. The feeling of frustration evoked by eight-year-old Virginia O’Hanlon in
her letter to the editor, and the answer she received, was developed into a radio play and further adapted for theatre. As a result, the story of Virginia and her family has become a popular part of holiday folklore.

Director Adrienne Steer chose Yes Virginia for their holiday show because of the story behind the story.

“I fell in love with the characters and the connectedness and reality of these characters. It’s set in 1897, but these are the same questions we’re dealing with today – how do you know what to believe in, how can you prove anything?”

The appeal to Yes Virginia lies in the fact that it is not a traditional holiday story. The depth and reality of Virginia and her family is something that all families can relate to.

The theatrical part of the show itself isn’t a traditional undertaking either. The set is minimal, the actors stay on stage, and well, it’s not good to give too much more away.

Yes Virginia, There is a Santa Claus runs at the Kitchener-Waterloo Little Theatre, December 4-6, and 11-13, tickets are $15.