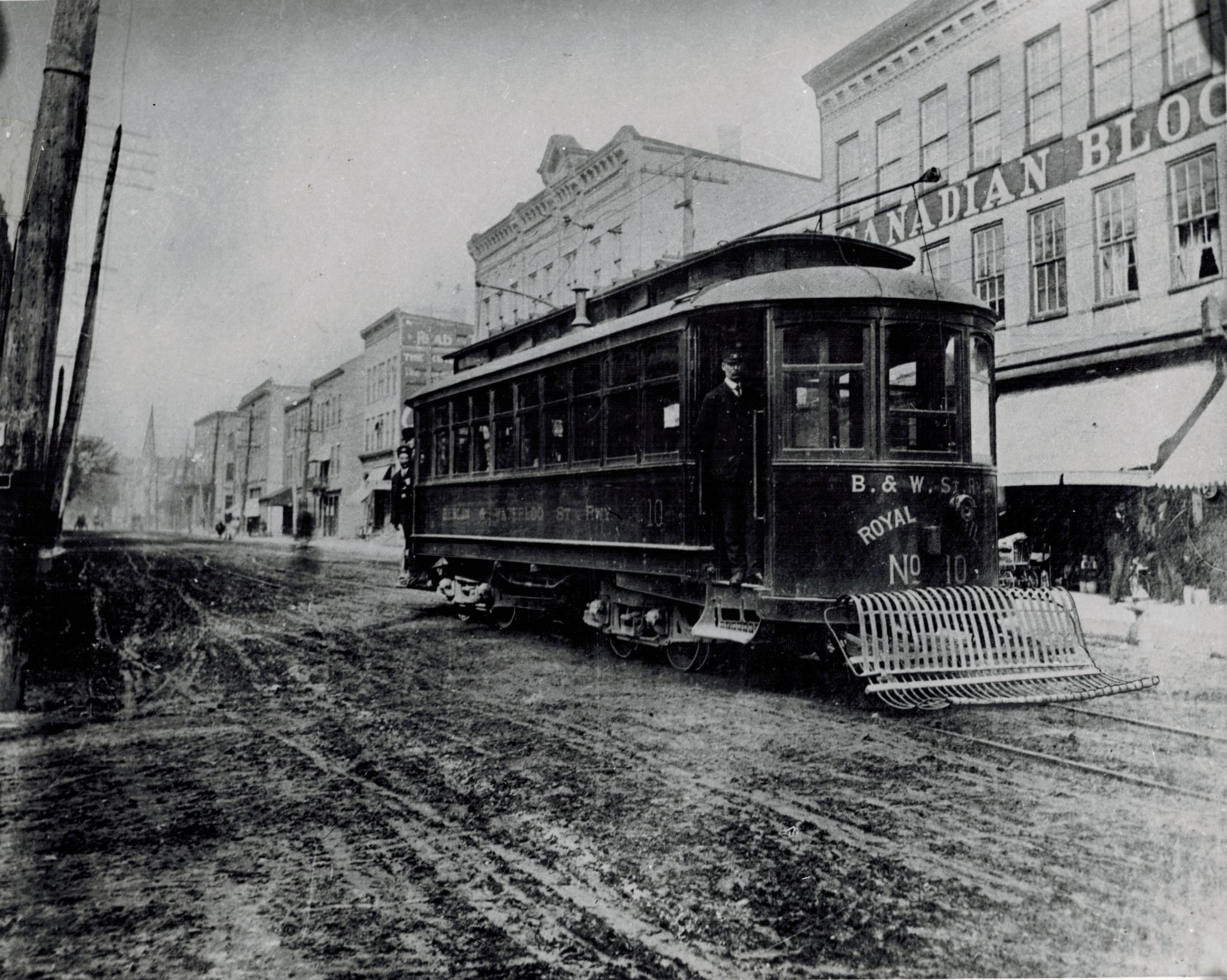 With state-of-the-art ION trains finally rolling through KW streets, it feels as if we’re entering a new era of public transportation in the Waterloo Region. But don’t be fooled, light rail is nothing new to KW. In fact, long before Google arrived along with the tech sector, before RIM and UW were popular acronyms, before Krug and Electrohome built teak stereo systems and oak chairs, even before the two World Wars, back one hundred and twenty eight years ago — when Kitchener was Berlin and Waterloo was, well, Waterloo — on April 4, 1889 a shipment of six Light Rail Vehicles (LRVs) arrived at the Grand Trunk Railway Station in downtown Berlin.

Seating up to 16 passengers, these LRVs were much smaller and lighter than Bombardier’s ION. Indeed, the original vehicles rolling down King Street over a century ago didn’t even have engines. They were powered by horse.

Seven years prior, three local “gentlemen” had motioned a private member’s bill in Berlin’s legislature: an “Act to incorporate the Berlin and Waterloo Street Railway Company.” They wanted to construct a street railway that could provide service down King Street for Berlin and Waterloo.

For the two towns’ combined population of 6,300, it was a bold proposal. Too much, at first, for town council to accept. But after a few years of deliberation, council approved the project and set out a charter for its operation (presumably to the chagrin of anti-LRT protest groups). Railway service was to operate at intervals of no more than an hour; the LRVs were to have front and rear lights for use at times of low visibility and a bell was to be affixed to the harness of the horses to warn pedestrians of an approaching vehicle.

By the time work on the railway got started, much of the company’s financing had been taken on by “capitalists” from New York City, albeit there was still partial local ownership. In 1888, an order for steel rails was wired to England and on June 30 of that year, the first spike was driven into the ground. But this was largely a symbolic gesture to satisfy the demands of the company charter. In reality, most of the real work didn’t begin until after the cars arrived in April next year.

On May 8, 1889, a team of forty construction workers began laying the railway line on King Street at Bridgeport in Waterloo. By May 30, the line was complete as far as Wellington in Berlin. It was a single lane of tracks with a bypass at the mid-way point. Service must have started before the railway was finished because, according to the first driver of the streetcars, Harry U Clemens, passengers started hailing rides in May, 1889. There were originally only two cars operating, powered each by one horse, either Joe or Kate the Grey Mare.

Once the the line was complete, it measured approximately 3.9 km running down King all the way from Bridgeport to Scott Street. Clemens reported that the cars usually carried 10-15 passengers at a time, totaling about 400 per day. Service started at 6:40 a.m. in the morning, departing from a horse and car barn located in Waterloo on the corner of Princess and King. The trip to Berlin took about 40 minutes, round trip back to Waterloo was 90 minutes. The last trip of the night left Berlin at Scott Street 9:40 p.m. On that trip, Clemens would attach a deeper-toned bell to the horse, so that any late night revelers knew it was their last chance to hitch a ride — otherwise they’d have to hoof it home.

Clemens also recalled that in those early days of operation some prominent Waterloo businessmen made a bet regarding how far, if unhitched and allowed to coast, the street railway car would roll from the top of the hill on King Street down into Waterloo. It was a hazardous test because of the slight curve King makes at the bottom of the hill entering downtown Waterloo — at the time there was also a deep ditch running beside the road ,there.

But Clemens was clearly not one to shy from a challenge (nor one to consider personal liability). He himself rode the car from the top of the hill to the place where it came to a rest in Waterloo. The car stopped at a point closest to the spot predicted by a man named Dr. Wells. He won the bet and took home the pool of money. May his name go down in history.

In 1895, the street railway was electrified, powered by the Berlin Gas and Electric Company, which was owned by the Breithaupt family. New electric-powered LRVs were purchased which could seat much more people. There were two types of cars, an open-style vehicle which was windowless, used in the spring and summer weather permitting and an enclosed car for colder or rainier days. Crowds of onlookers gathered to watch local politicians ride the inaugural run in May.

At that time, a single ride cost 5 cents, or six for twenty five cents. In the Grace Schmidt Room archives at Kitchener Library, there’s a small booklet from 1897 published by the Berlin and Waterloo Company titled “Conductor’s Rules.” Among its list of eighteen rules for the car operators, some protocols include: the use of “universal politeness” with all passengers, the delivery of large parcels to any stop for the price of one ticket and surprisingly, rules for the ejection of unruly passengers (“without violence” and only after a reimbursement of their cost).

After electrification, Joe and Kate continued pulling the older models down Water Street and Weber on a short connection to the train station until the two horses were finally retired in 1898.

Street railway service underwent significant updates and expansions over the next four decades until it was replaced with a trolley bus system in 1947. By and by, the old rail lines were paved over and forgotten, only to be rediscovered by LRT construction crews half a century later. So when the ION officially starts service spring 2018, just remember that Clemens, along with his two faithful steeds, Joe and Kate, were giving rides down King Street long before we were all born.

With a special thanks to Karen Ball-Pyatt at the Grace Schmidt Room in Kitchener Public Library for her help with the research of this article.