“Yo, the Hellcat got raided.”

The first message that Dylan F. Bravener sent me on Thurs. April 11 was more disappointing than surprising, to be honest.

This presented a challenge, as the popular Dundas band, The Dirty Nil, were booked to play the Hellcat’s ‘grand opening’ in just three days, on April 14.

The Hellcat is — I should say was — the brainchild of a network of musicians and friends involved in the music scene in the Tri-City area. Bravener and his friend/associate/bandmate Chris Walton — one of the people behind Snake Pit, Waterloo’s infamous and now-defunct underground punk venue — had spent the last six-or-so weeks preparing to launch the underground venue in collaboration with various community members. 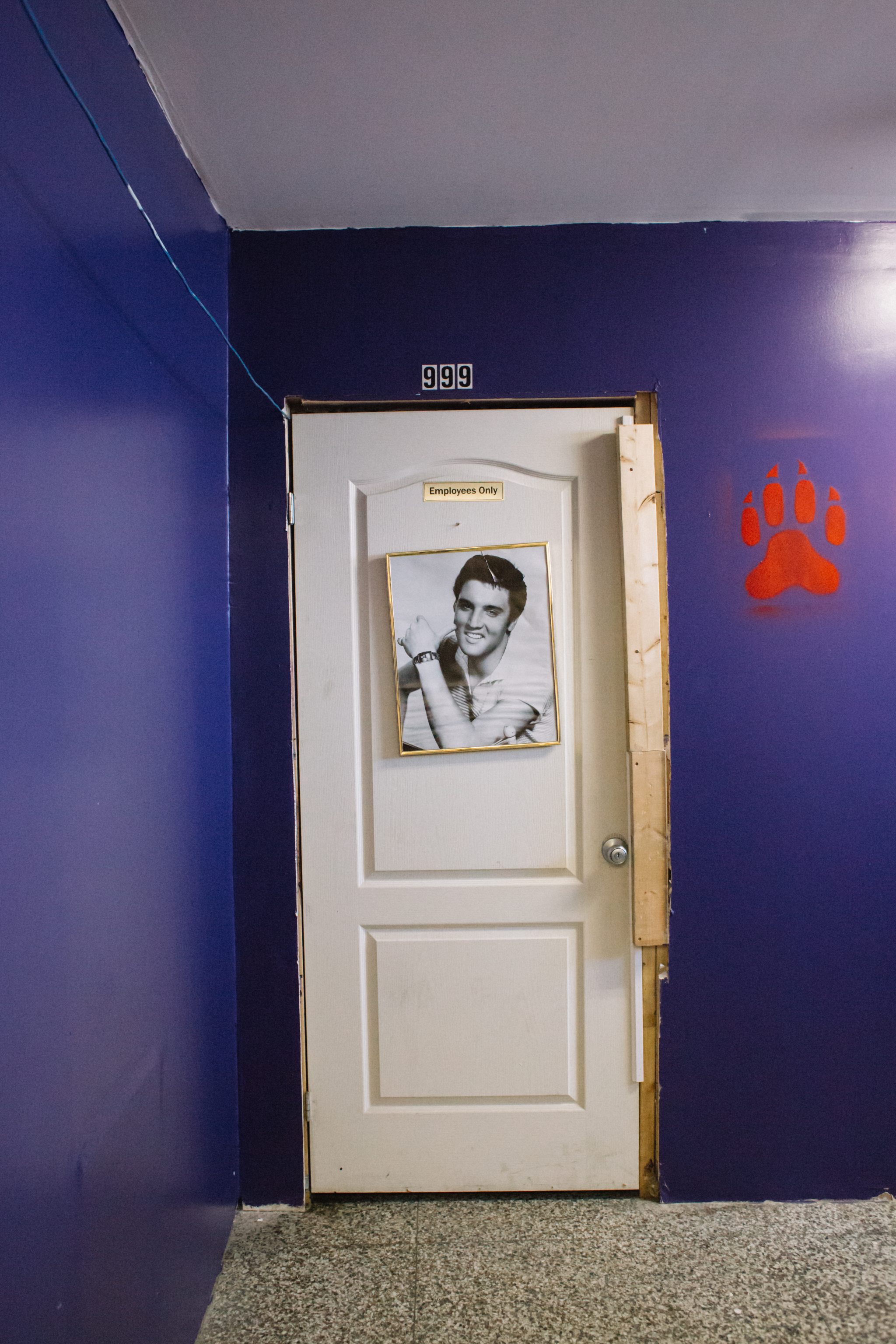 Bravener and friends stumbled upon the space that would come to be known as the Hellcat several months ago by chance. The space happened to back onto “Elvis Freshley,” a communal space for jamming and recording, shared by Bravener and his network of friends in the local music scene. With the impending demise of the Snake Pit drawing near, the collective dubbed the Hellcat KW’s newest DIY space. s the grand opening of the now-infamous venue loomed closer, it appeared that the excitement for the new, underground DIY space had grown out of control.

Posters around town were wrought with clues pointing to the existence of a new go-to place for locals involved in the underground music scene. “Ask a punk,” was the only hint of any location offered by various flyers and event postings circulating Facebook, but as the hype mounted, it seemed almost inevitable that a show featuring The Dirty Nil — the band that took home last year’s Juno for best emerging artist — would slip onto the wrong person’s radar.

Evidently, the local fire marshal showed an interest in the Hellcat. After authorities assessed the venue, long story short, it became clear that no shows would be happening at the Hellcat. Definitely not any time soon. 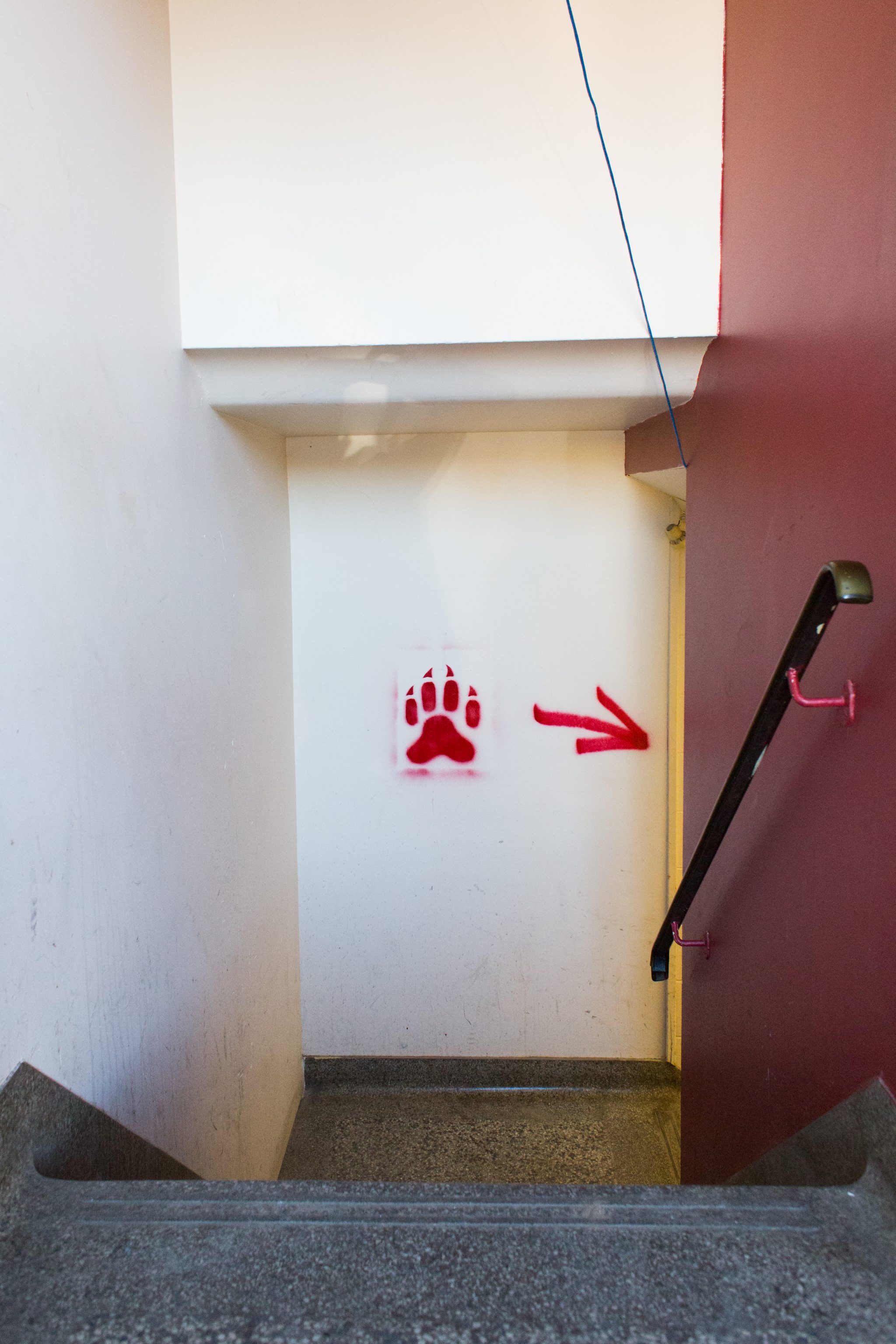 “Fuck,” was the only response that seemed adequate from my end, so I went to meet Bravener at the restaurant he works at to get the full details of the story. When I approached the bar, I sat down next to him and grabbed a bottle of water and a glass from across the sparkling black counter-top.

“At least they gave you a heads up and didn’t just raid the place right in the middle of The Dirty Nil’s set,” I offered.

There were roughly 100 tickets sold, after all, and the event had generated a lot of buzz.

The show must go on. That is something that is appropriate to say in this type of situation.

So Bravener continued to ignore me, offering an all-too-sincere, “thank you for being here right now, dude,” every now and then, between phone calls and Facebook responses.

Understandably, so; he had a lot going on. He had just three days to find a place for The Dirty Nil to do their thing, not to mention sorting out the host of other events planned to take place at the Hellcat.

“Moving to other venues was quite the feat but it worked out,” Bravener said. “People like Kyle [Wappler] from Have Hope [Shows] helped me out.”

Wappler had originally connected with Bravener to book The Dirty Nil in the Hellcat after he heard the band was looking to play a show in a fun, DIY space.

“I’ve worked with [The Dirty Nil’s] agent a lot for various things,” Wappler said. “I work with them a lot for KOI festival and I do other events for them quite regularly.”

“[The Dirty Nil’s agent] actually just reached out to me and asked if I knew any cool DIY spots that we could book The Dirty Nil in because they had some time off and they just wanted to play some really cool shows,” he said.

“So, we put it together at the Hellcat.” 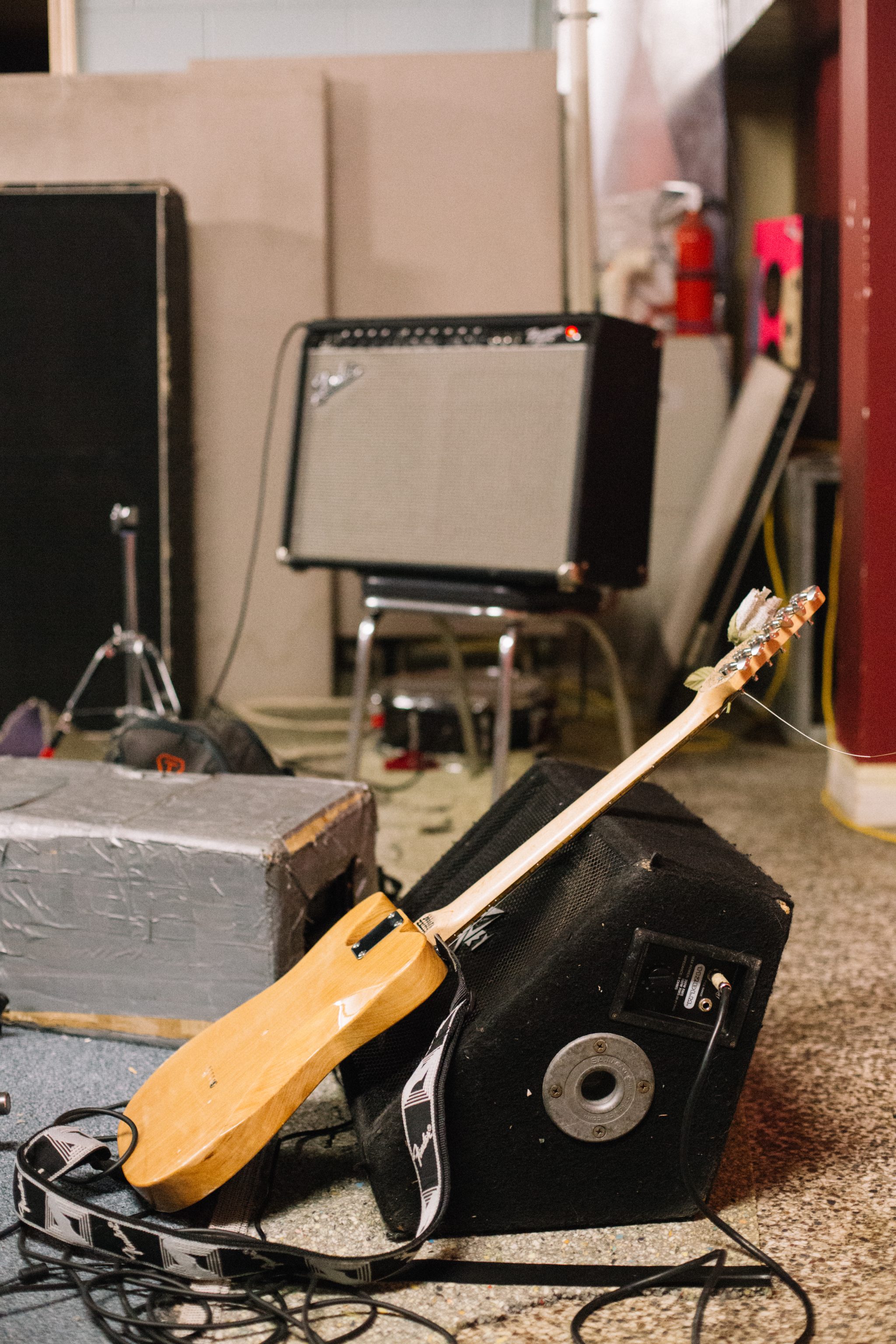 Unfortunately for The Dirty Nil, and the host of others involved, the Hellcat garnered too much notoriety. Luckily, there was just enough time to reorganize into a proper venue.

While Bravener and I shared a pizza, his phone buzzed constantly with notifications from Wappler, Walton and Wappler’s collaborator, Jamie Huenemoeder, as they scrambled to find a venue.

The four of them diligently made phone calls to various bars and clubs around the city, trying to find somewhere available for the ticketed event on short notice.

“I think we called about 15 different venues just trying to see who would get back to us,” Wappler said, after the fact.

After a few stressful hours, the group found a saviour for the event in Devon McKenzie, owner of Night School in uptown Waterloo.

“I gave him a shout and he gave me a call back and said ‘yeah, lets pull this off,’ so he pushed his DJ night back a little bit for us [to accommodate] and made it a floor show,” Wappler said.

“It made it easy for him, and easy for us, and we kept it punk rock for The Dirty Nil too.” 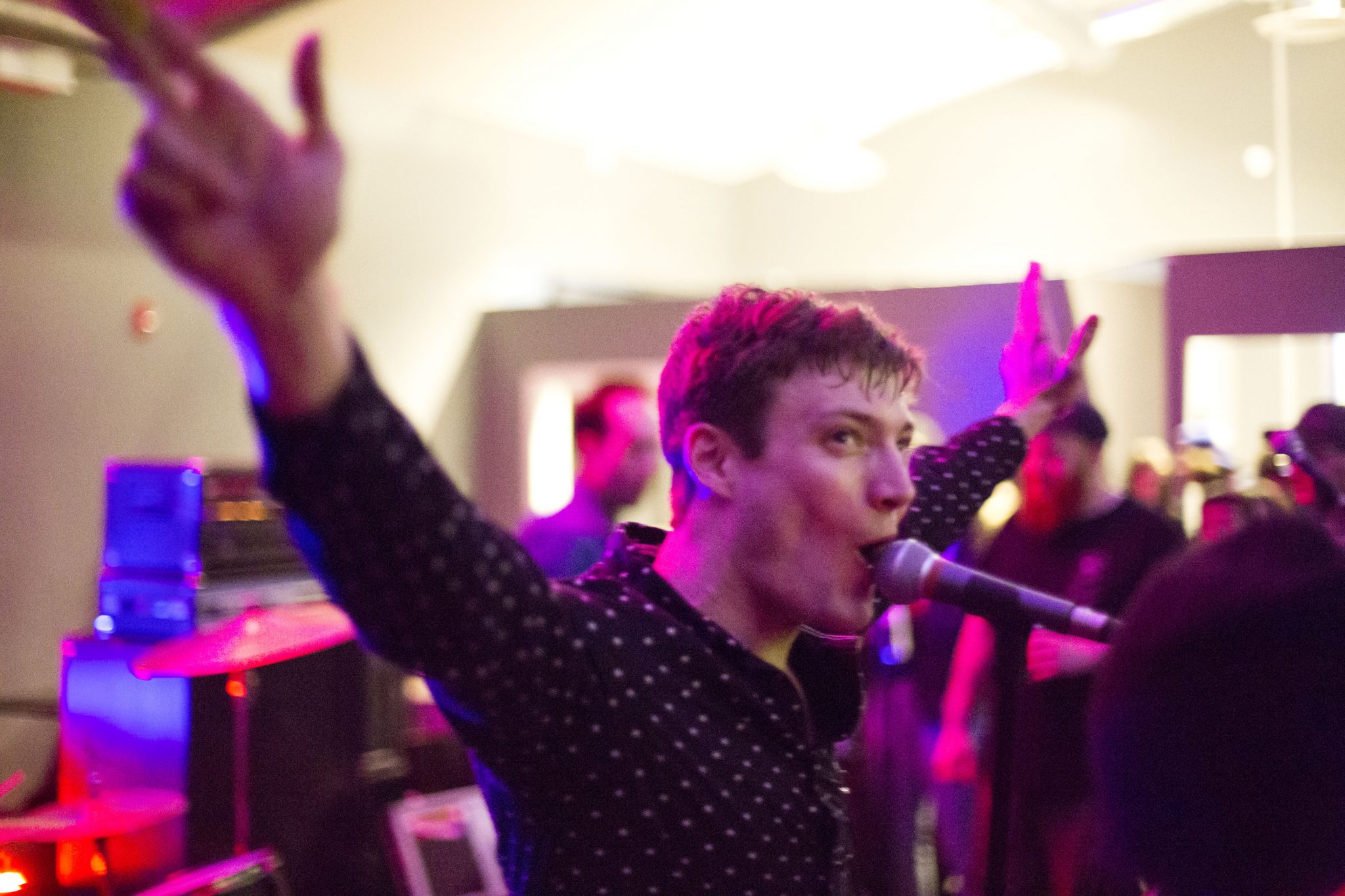 Though The Dirty Nil show went off without a hitch — their sing-a-long set was capped off with an energetic cover of Metallica’s “Hit the Lights” — a particular problem remained, that being what to do with the rest of the shows that Walton and Bravener had booked for the Hellcat.

Walton and girlfriend Stacie Jones had already begun to transition from booking bands at their house venue — the Snake Pit — to the Hellcat. Aside from the obvious legal liabilities that coincide with organizing house shows, the popularity of the Snake Pit meant that the venue was seeing more guests than ever anticipated.

“The progression of Snake Pit going into Hellcat was like, ‘I’m getting way too many bands, I can’t continue to do shows in my house,’ because my house has become larger than I have,” Walton said.

Walton began to experience increased interest in booking from bands across North America after appearing on the podcast Taker Wide with Steve Vargas.

“Ever since that podcast, all my shows have been so successful and well attended,” Walton said. 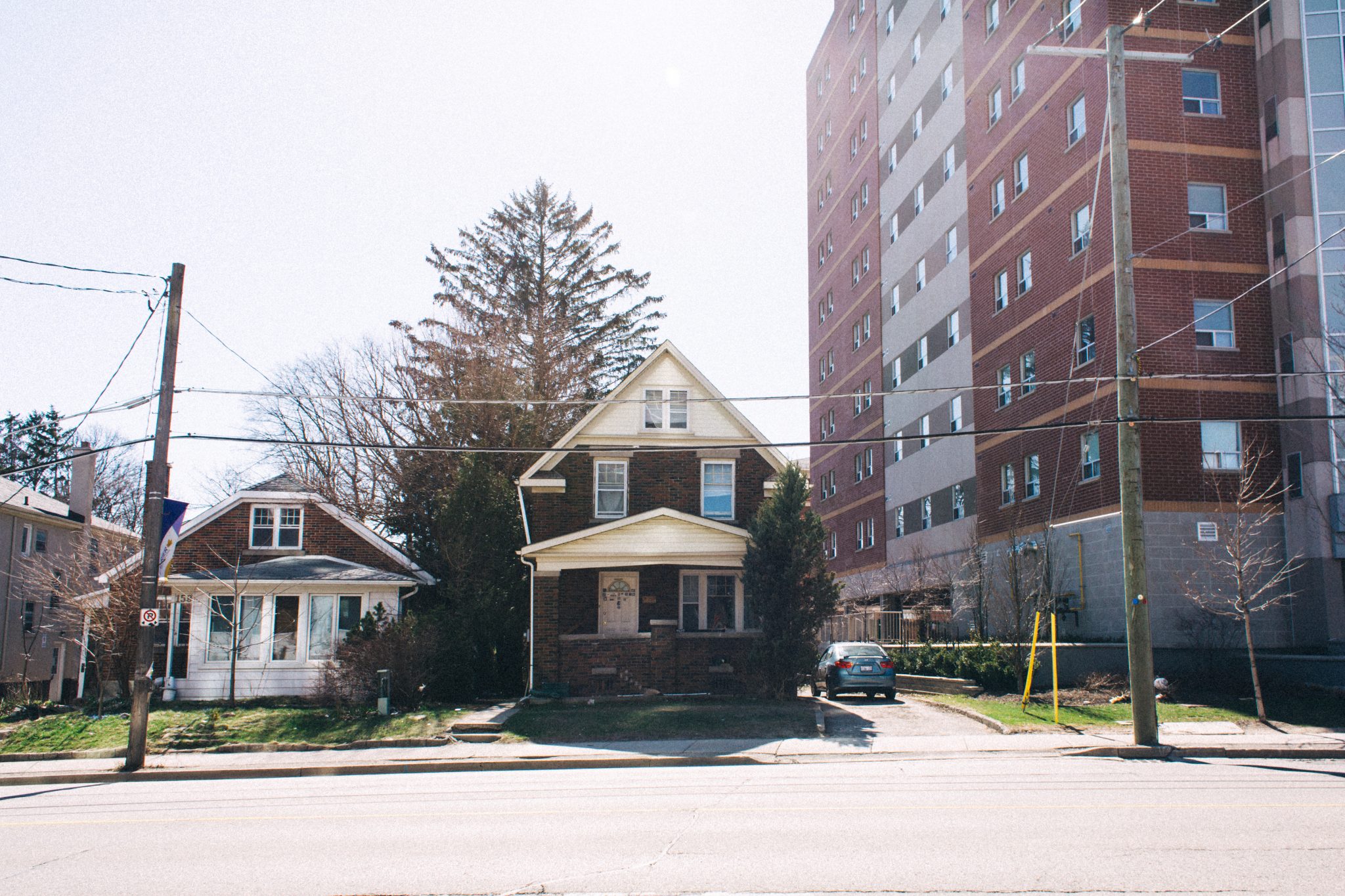 Though the Snake Pit has gained a strong following in the local underground music community, the house venue saw its last show on April 28, as the King St. residence will soon be demolished for alleged project development.

KWCDIY — Kitchener-Waterloo Cambridge Do It Yourself — is “the phoenix rising from the ashes of the Hellcat” as Bravener described it.

A joint effort between Walton, Jones, Bravener and a host of other community members, KWCDIY is the banner that all the Hellcat shows have been rebooked under since its unfortunate demise.

“KWCDIY is like this family of friends that like to do the same niche kind of things,” Bravener said, adding that most of them are regulars at Elvis Freshley.

“The venue is ending; the community will keep going on.”

The remaining Hellcat shows have been re-booked by KWCDIY and 3 Nines Cassettes for May 4 at The Pin-Up Arcade Bar and May 15 at Harmony Lunch in collaboration with Have Hope Shows. More events will be announced soon. 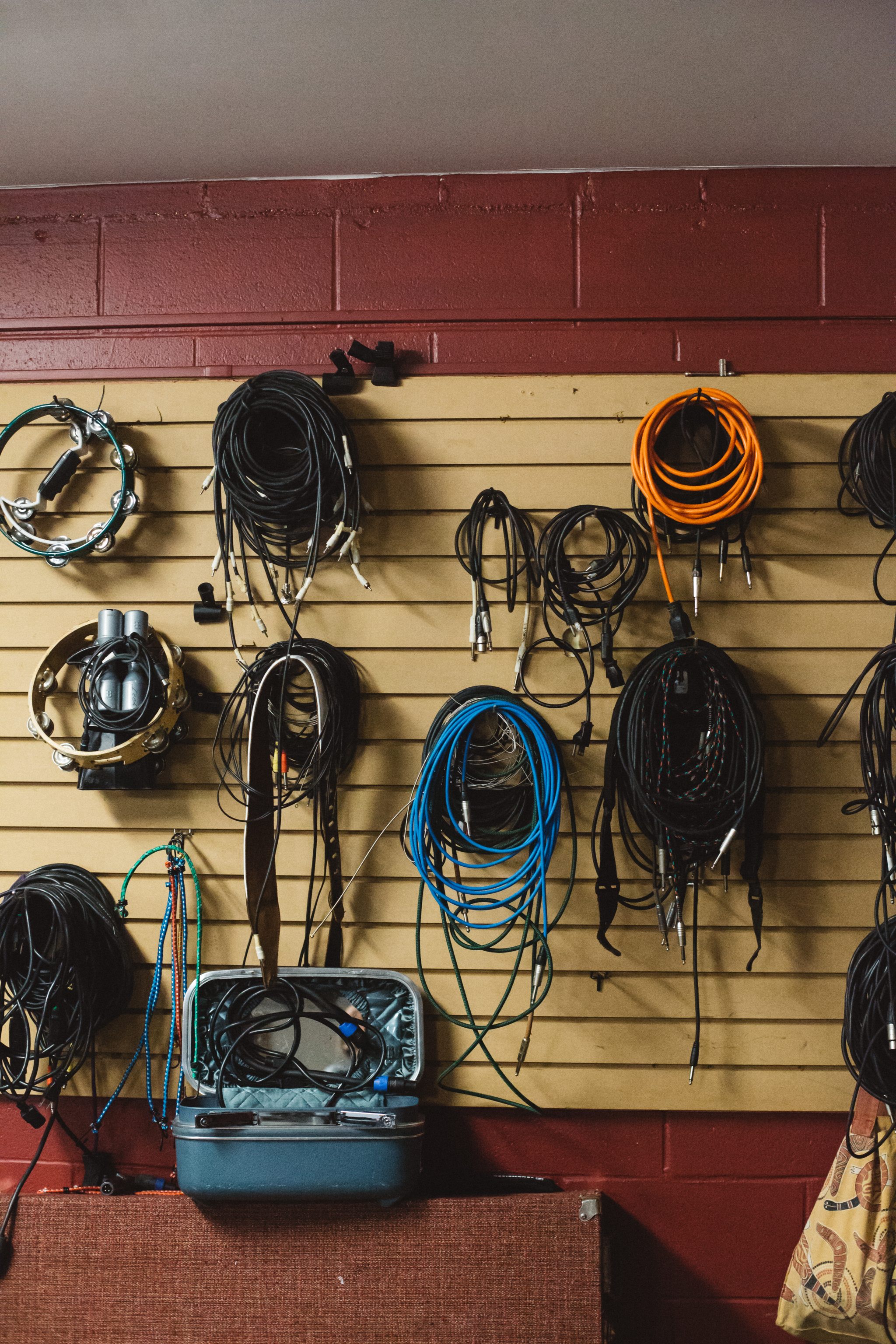 As I talked with Bravener and Walton upstairs during the final Snake Pit show — two weeks removed from the events of April 11 — a realization hit me: The Hellcat represented something that could never be contained in a single room or restricted to a venue.

It was the collaborative effort of so many people. From Kyle and Jamie and Have Hope Shows to the Snake Pit, Chris, Stacie, Dylan and KWCDIY — not to mention all the bands and fans alike.

And while The Dirty Nil were never able to christen the venue that will — for the most of us — only remain a figment of our imaginations, the spirit of the Hellcat will live on in KW’s thriving underground music community.