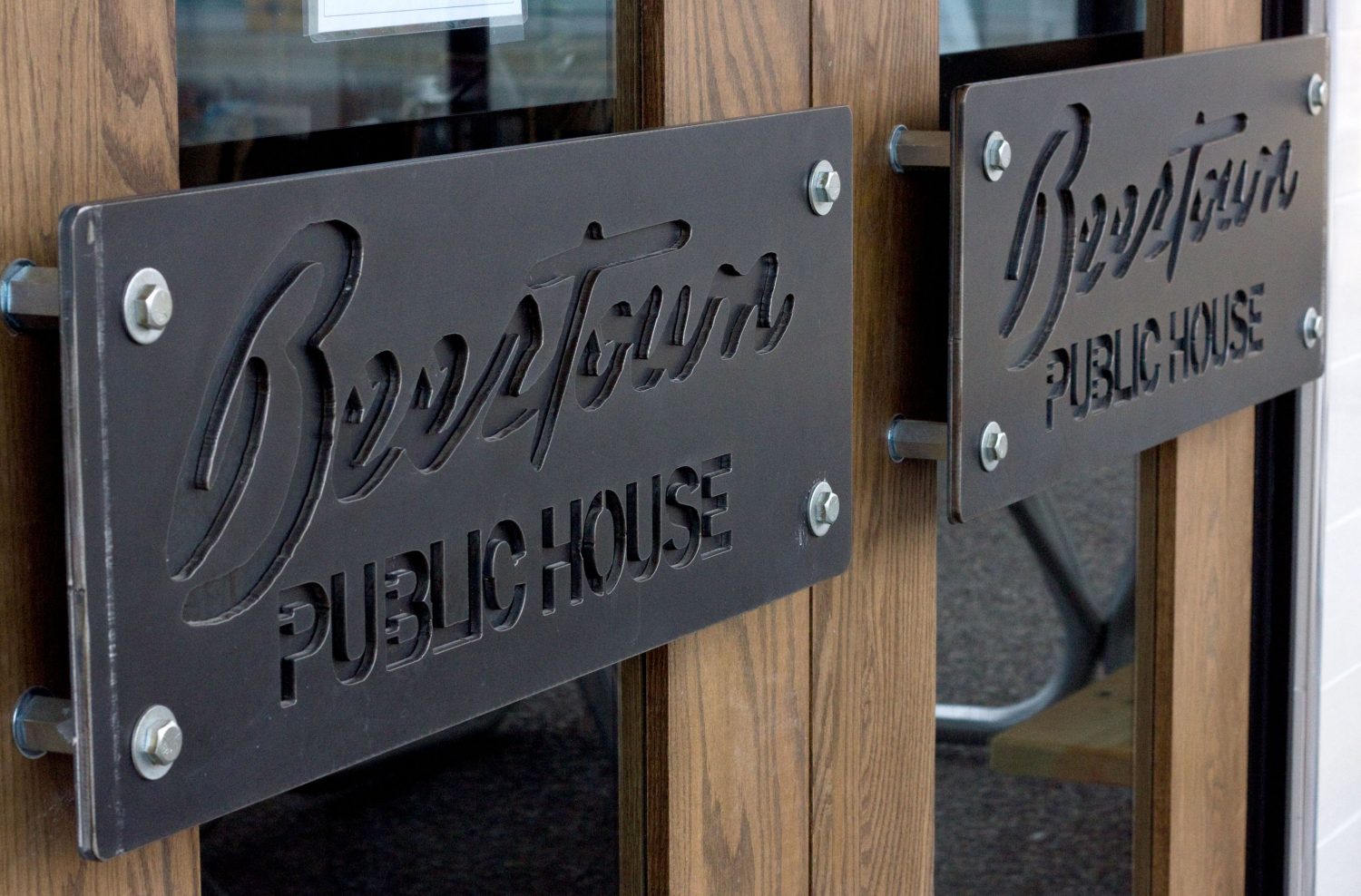 Ale in the family

Whetting the tastebuds of passersby with its eye-catching neon sign, The Charcoal Group’s newest restaurant finally opened its doors to the public on Nov. 16.

Beertown Waterloo, located in The Shops at the Waterloo Town Square, is thankfully, not what you’d expect a mall restaurant to be. Open-concept in design, the room centre’s around a spacious, rectangular bar that’s framed by an impressive wall of TV screens. Lit by keg chandeliers, the restaurant imbues a distinctively retro vibe throughout, with its ample use of white subway tile, red bricks and ‘60s era furniture.

Jody Palubiski, managing partner and one of the four owners of The Charcoal Group, first conceived of Beertown three years ago.

“There was a great article in GQ Magazine,” he said. “It was called ‘The Birth of the Modern Beer Bar.’ And even just the tone of that… it just had a cool factor to it. It reminded me of that Miles Davis album, The Birth of Cool.”

After visiting popular beer bars in New York City, Palubsiski knew that this uniquely cool and comfortable concept would be a perfect fit for Waterloo Region.

“It captured the essence of whether you’re like my wife and her three girlfriends who go out each month or you’re the guy who works at the bank across the street and you come over here and undo the top button and loosens up his tie; it felt right for everybody,” he said.

After successfully launching Beertown in Cambridge eight months ago, expanding into a second location seemed like a no-brainer for Palubsiski. And when The Waterloo Town Square space became available, it was a perfect fit.

“We thought it would be a great fit for many different reasons because of the vast demographic of everybody that uses this [Uptown] square and all the different things happening here.”

Beertown’s large, covered patio overlooks the Uptown Square and with a full-scale outdoor bar, mounted TV’s, it’s sure to be packed come the first signs of warm weather.

With current trends pointing to a renaissance in the world of beer, even the LCBO and Beer Store are beginning to offer up a greater selection of lesser-known craft and import beers, making Beertown a relevant addition to the Uptown strip. The average beer drinker is changing as people — increasingly young women — seek to become more educated about what they’re drinking.

“Now, you see young women coming in saying ‘what kind of a summer vice do you have? What kind of porter, do you have?’” said Palubiski. “I think the awareness and the changing of the stereotypes around beer drinkers has changed dramatically.”

Currently, Beertown offers 30 beers on tap and 92 in bottles. It’s a mix of local craft breweries, such as The Brick and the Muskoka Breweries and bigger breweries. Beertown seeks to maintain a varied selection. Popular brews include Mill St. Organic, Somersby Cider and Fruli — a delightfully pink, strawberry flavoured Belgian wheat beer.

Beertown is also one of the only restaurants in the area to serve Delirium Tremens, a potent Belgian golden ale that is considered to be one of the best beers in the world.

Beyond beer, the restaurant offer a “better than what you’d expect” wine list, a host of traditional cocktails, as well as beer cocktails, which combine beer in classic cocktail recipes.

“I love when I come in and I see a couple enjoying a bottle of wine at Beertown,” said Palubiski.

“To me that says we’ve gone past [offering a wide beer selection] and just created something cool and makes someone feel like they’re in on something.”

Still maintaining a focus on quality food, Beertown provides an interesting take on typical menu items. Standout dishes include brisket poutine, wonton nachos, and their many burgers, which are all served on freshly baked bread from the Bauer Bakery & Cafe.

In close proximity to some of Waterloo’s high-tech-giants, Palubiski hopes to keep the community top-of-mind.

“There’s so many up-and-coming tech companies that are trying to attract the biggest, the brightest from the whole world to come here… And we always see it’s kind of becoming on us to provide something really cool. So, if people do decide to come live in Kitchener-Waterloo, we want to give them choices too.”