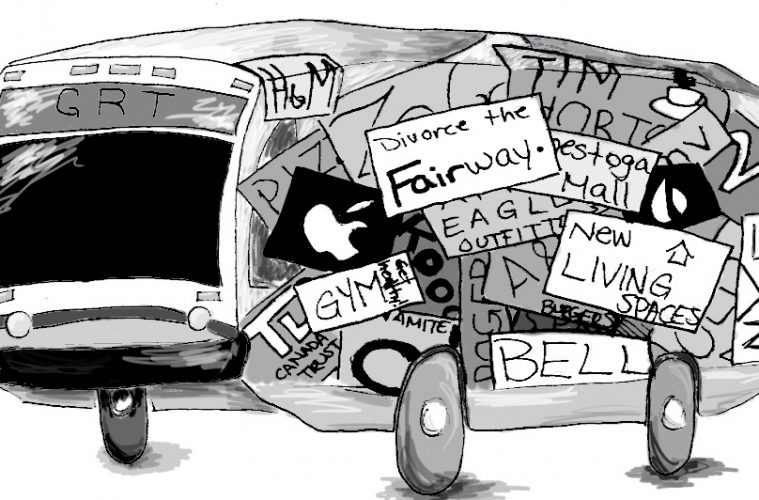 For something that will move people throughout this region more than 20 million times this year, the bus has few fans, and gets even less respect. And that’s from the people who are most crucial to its success.

Even as the Region of Waterloo spends big on increases to Grand River Transit service — an effort that has led to ridership doubling in less than ten years — Regional Council and staff are unable to conjure more than grudging acceptance of the vehicles that actually get us around. The bus’s presence on our streets is tolerated, but rarely, if ever, is it thought to contribute positively to the aesthetic or cultural character of the places it runs.

The way a bus is viewed by the Region and its staff was made particularly clear recently when they attempted to justify the practice of wrapping buses in advertisements. Opponents of ad wraps complain that they cover windows, obstructing views, making transit less comfortable to ride and more difficult to use, snubbing riders in the process.

In response to these critiques, Regional Councillor Jane Mitchell explained on her blog recently that, “the Region receives approximately $400,000 a year for bus advertising revenue. This includes interior, exterior and all bus vinyl applications,” adding that all revenue “effects the bottom line.”

None of this is wrong. The cost of running transit is offset by ad revenue. However, the weight given to this particular revenue line is instructive for understanding how little the Region cares about the physical experience of taking transit, and in turn how important it considers the wants and needs of transit users to be. In this context, ironically, the Region’s shortsighted view of the bus becomes clear.

The first problem with the Region’s justification for ad-wrapping buses is the isolated way in which the money made is presented. It’s true that $400,000 is a considerable sum, but only when it’s considered by you or I. In terms of an agency like Grand River Transit, $400,000 barely registers. In 2012, passenger revenue for transit will exceed $27 million, which makes ad revenue seem pretty insignificant, especially if even a small fraction of the agency’s 20 million annual trips are negatively affected.

The second, and much larger, problem with the Region’s analysis of bus ad revenue is borne out of the first: council and staff don’t appear especially adept at understanding what things are worth.

Buses are perhaps the most visible and widespread form of branding the Region has, yet they’re treated like wasted space.

The side of a can of Coke isn’t covered in ads for used car dealers, because Coca Cola understands that the symbolic power of that red and white real estate is worth vastly more than any sum they could hope to extract by selling it off. Rather than taking the opportunity to consistently remind everyone that the Region stands for civic virtue and collective purpose, they choose instead to tell the story that a service they would desperately like us to use is worth less than a rounding error in the annual budget of that very same service.

If the Region would really like more people to start choosing transit. They should start by asking nicely.