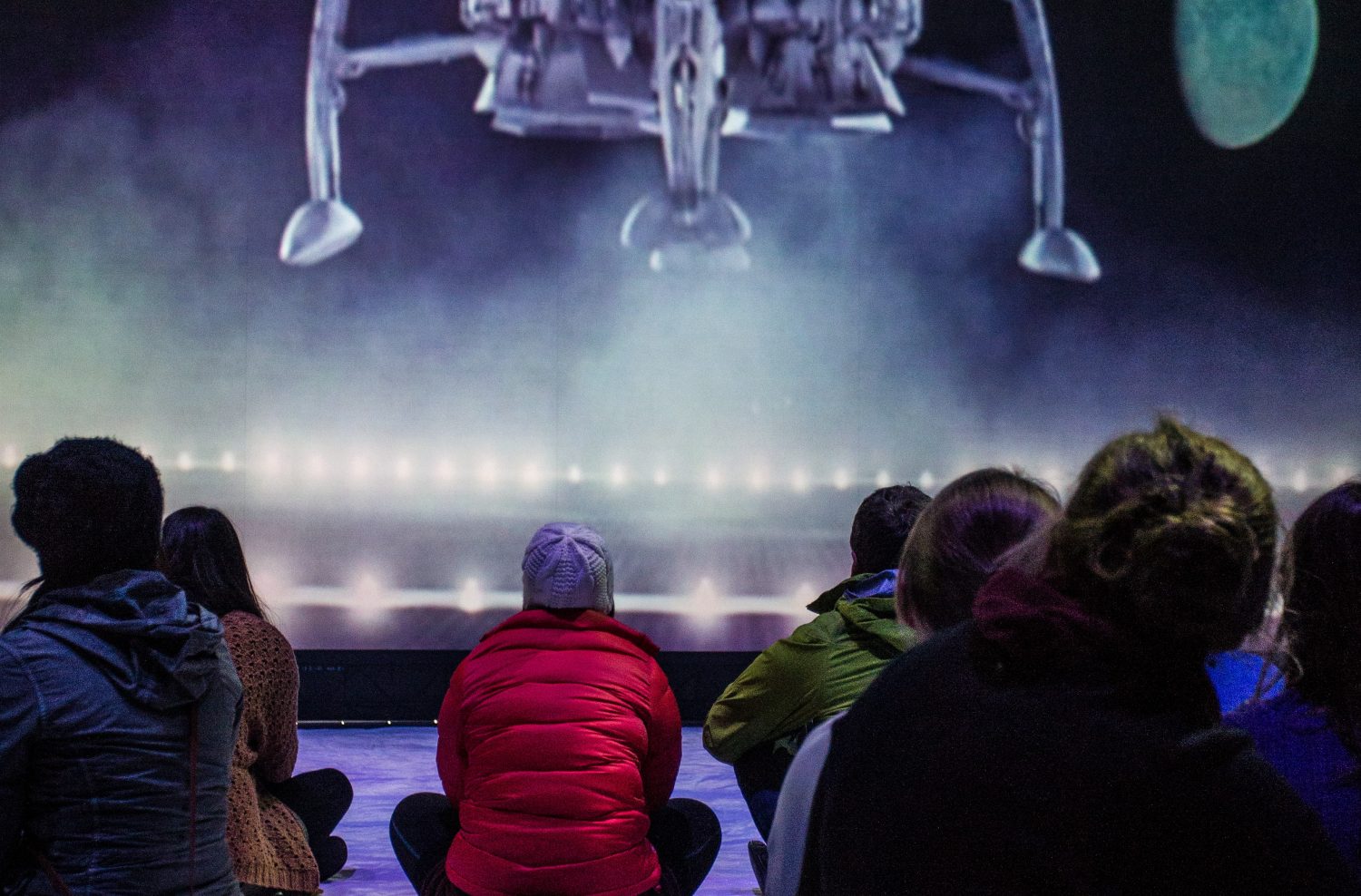 A shift in the culture

I couldn’t tell if I was hearing the plastic bottle being swept by the wind across a sidewalk, allowing a ‘pop’ every time it breached a crease in the concrete, or if I was just imagining it. The echoing sound had filled recent hours as Night\Shift began to slow. Attendees retreated and a clean up crew emerged. Sparring with the chicken wire that held together sea creature sculptures crafted entirely of single-use plastic bottles, Kitchener’s nocturnal art party was being dismantled to the tune of rogue water bottles rolling across Civic Square.

Mere hours earlier, people took up this space. They drowned in the projected image of water in the City Hall Council Chambers. They embraced a younger version of themselves, indulging in the arcade-of-old on Goudies Lane – ping-pong, kaleidoscopes and giant Lite-Brite lined the alley. They were challenged by critical demonstrations and felt their heartstrings being plucked like the Reggae, bass guitar strings reverberating in Café Pyrus. They spoke, to each other and to strangers, sharing stories of old Kitchener, of new family members, of the city’s growth – this is where I came in.

Situated between the sound of rolling water bottles and of bass guitars, were two armchairs, two microphones and a camera. My layers did little against the icy air as I occupied one the aforementioned seats; the other seat, parallel my own was filled and emptied as those taking in the festival sat down for live-to-air interviews.

Like the sound of those water bottles slowly beginning to roll as a breeze caught them, people began their stories meekly, one word answers breathed quickly into the microphone, the whisper of a response carrying down King St. from the speakers. But as we went on, the proverbial water bottle began to gain speed, to bounce and rattle as it hit divots, barreling down the street. The answers became vibrant and lively like that of a new celebrity.

Most stories were about Night\Shift: the sugar skull face paint adorning their skin, the warm beverages they had sampled or the pub-crawl they had emerged from. But some stories went a layer deeper than face paint – they dug, instead to the core of Kitchener and how that core has changed.

“It’s something about this city, and it’s not just the people and it’s not just the size, but it encourages a kind of getting involved that I haven’t seen elsewhere,” said Tenille Bonoguore, founder of Grand Porch Party and one of the early guests on our pop-up set. “Whatever it is, though, it’s helping the city to grow.”

She spoke these words confidently as the small crowd that had formed clapped and nodded in agreement. In the flurry of interviewing, writing notes and working a soundboard, it wasn’t until the city had gone to sleep, and I aided in cleaning up the aftermath of Night\Shift that I could take these words to heart.

I was leaning over a massive, water bottle crafted turtle, trying to lift it with Eric Rumble, Night\Shift founder and organizer, when the chicken wire frame became tangled in my knit gloves. We heaved at the structure, which was getting caught on the steel edge of the dolly we were using. Bottles fell from any area we grabbed, hitting the ground and rolling in every direction, we frantically chased them, leaving nothing behind. The sound carried remarkably on Kitchener’s 3:00 am silence as I followed Rumble to the City Hall storage area, sea-creature in tow.

Thankful that nobody was awake to witness the embarrassingly clumsy moment, I wondered what I was doing carrying bottle-crafted sea-monsters around Kitchener in the wee hours of the night. Bonoguore’s words rang through my mind – she was right. It wasn’t just the people, or the size of Kitchener that put me in the peculiar situation. There is simply something about this city.

Something that calls people to withstand the cold to serve coffee to neighbours drinking in the arts. Something that encourages families to attend public pumpkin carving parties. Something that echoes through the crowds of strolling patrons at Night\Shift. To me, it sounds an awful lot like that rattling, popping water bottle, gaining momentum as it meanders down King Street.