Ellie Anglin loves zines. She owns about 500 of them, making her part of a large local community of DIY book makers whose creations are part of a movement and culture spanning decades.

A zine, if you’re not familiar, is a self-published pamphlet or booklet, usually filled with writing and visual art. The zine as we know it now became popular in the 1970s. At that time called “fanzines,” many early creations were punk and feminist, two subjects largely ignored by existing media.

The concept likely goes back hundreds of years, when people started printed political pamphlets after the printing press was first invented, according to Anglin.

“They’ve kind of maintained their popularity because in a way a physical object feels more permanent,” said Anglin. She got into zines through the Riotgrrrl movement in the 1990s. Her first zine was made when she tried to start a KW chapter of Riotgrrrl in the early 2000s, and she was the driving force behind the KW Zine Library, which is now housed at Open Sesame.

“Zines are such an amazing force for marginalized people and have been used so much to help,” Anglin said, adding that “that pretty much defines the movement.” She has hosted several zine making workshops for the queer and trans communities at the uptown Button Factory. Sexual assault, transphobia, racial and sexual discrimination and body shaming are common zine themes. 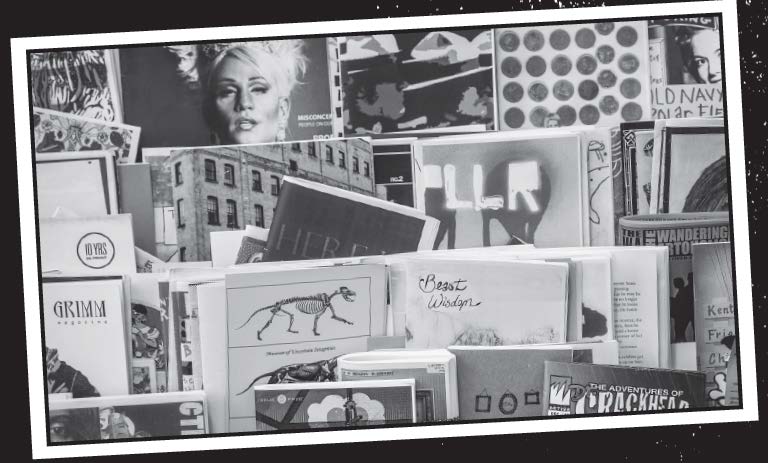 The KW Zine Library’s home at Open Sesame makes sense, as the store’s owner Lauren Weinberg sells a variety of zines from across Canada and the United States.

“We carry a lot of books and magazines and art. [Zines] seemed like a really good way to educate people about important topics and to give emerging writers a chance to share their work in a way that’s very accessible to people,” Weinberg said.

“A lot of the people who made the zines in the library are still involved in cultural life here,” Weinberg said, and a quick look through the zine library reveals a lot of familiar KW names, and yes, a lot of people still working creatively.

Janice Jo Lee, local artist and singer, has created and contributed to many zines, including Grasslands, which was edited by Lee and Live Local KW creator Juliana Gomez. Cheeses Murphy and Princess Cafe owner Marc Lecompte created the long running zine CTRPLLR in the mid-2000s, to which Anglin contributed. The Generation X video store in Waterloo produced the GenXine.

Local designer Jon Johnson has credited working on CTRPLLR and other zines as what got him interested in design in the first place.

“Truthfully, getting involved in zines is probably one of the things that has impacted my life the most. At the time, it helped me stay creative, as it gave me an avenue to continue to write outside of school, but it also turned me on to the fact that people can just make things that they want to make,” Johnson said.

“The first things I screenprinted and sold were CTRPLLR t-shirts, and now I screenprint and sell shirts as a part of my living. The first layouts I did were cut and paste zine layouts, and now I’m a freelance designer.”

Arguably, the most interesting part of zines are their handmade aspects. Most are designed in collage style by the zinemaker(s) with found and thrifted items. Anglin scours thrift store books and magazines for materials to make her art. They are usually laid out by hand and photocopied or printed on home computers and often distributed for free.

“Zines have a DIY aesthetic, they are not perfect, and that allows more people to become involved in their production, regardless of ability or experience,” said Marichka Galadza, who recently led a zine workshop at Maker Expo.

Galadza made her first zine while teaching English in a remote fishing village in Japan. The desire to document her experience, but lack of resources to do so professionally led to a zine.

“Some zines are really good, professionally mass produced, and very touching. Many are bad, angsty verbal diarrhea kind of crap. But that’s what I love about the genre, it’s pretty accepting,” Galadza said.

Zines require a lot of drive and effort to create content, collect contributions, design and distribute, usually on a small budget. And while creating a zine can be time consuming, many also describe it as healing and therapeutic.

“I was inspired by a lot of Toronto female identifying artists who took something that was really traumatizing or personal and made it this beautiful, healing art object,” Anglin said of her ever-evolving zine making.

“We are all makers,” read the volunteer t-shirts at this year’s Maker Expo, which included Galadza’s zine workshop station. Many of the zine creators I spoke with made it clear that there’s long been a DIY art community in the region, and possibly what has really made zines so present in KW is that they are an equalizing or egalitarian medium. Pretty much anyone can make a zine. They are handmade, self-published and the point of them is that you don’t need to be a professional writer, artist or publisher to make one. You just need an idea.